Art Sheds New Light On the Ecology of Ancient Egypt

The art of ancient Egypt is helping unravel 6,000 years of complex ecological interactions in the Nile valley. Dartmouth biological anthropologist Nathaniel Dominy and his colleagues created a chronological catalogue of animals in the landscape on the basis of artistic depictions in tomb paintings and carved reliefs on temples and everyday objects. 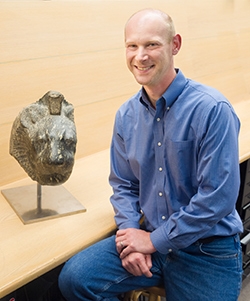 Professor Nathaniel Dominy with a stone sculpture of Egyptian warrior goddess Sekhmet from the 18th Dynasty, often depicted as a woman with the head of a lioness. The faithful rendering of the lioness, a gift of Mr. and Mrs. Ray Winfield Smith, Class of 1918, resides in the collections of Dartmouth’s Hood Museum of Art. (Photo by Eli Burakian ’00)

“The ancient Egyptians were keen natural historians, and artists paid close attention to specific anatomical details and proportions in their art. We can identify precisely which species of animal they were representing,” says Dominy, an associate professor of anthropology and biological sciences. This robust artistic record presents a chronicle of animals present or absent in the landscape over time.

On the human side, the Egyptians were regularly taking a census of their population for tax purposes. These records now serve to document population growth, which can be correlated with the structure and stability of the local animal community.

Dominy, his former graduate student Justin Yeakel, and their collaborators have just published a paper in the Proceedings of the National Academy of Sciences USA detailing their use of ancient art and other resources in constructing an ecological history of ancient Egypt. Yeakel, now a postdoctoral fellow at the Santa Fe Institute, is first author on the paper.

“We are excited by this paper because it is the first high-resolution record of an expanding human population coming into contact with essentially an intact Pleistocene community of large mammals,” says Dominy. “We can watch those animals disappear from the artistic record, and, by inference, the landscape, one at a time.” These include lions, spotted hyenas, warthogs, zebra, wildebeest, and water buffalo. As species keep disappearing from the environment, the whole ecological network collapses. While this may be a function of human population growth, there are also historical records of environmental changes happening at approximately the same time.

During the 6,000-year period the paper covers, there were two strong “aridification pulses”—extremely dry periods the authors acknowledge may have impacted both humans and animals along the Nile. “They [aridification pulses] may have been a factor in the collapse of the Akkadian empire and the Indus valley civilization and, in some ways, may have catalyzed the new dynasties in Egypt,” says Dominy.

These climatic changes appeared to drive complex interactions between animals and humans. Dominy explains that as animal populations go down, humans cannot hunt as effectively. “Humans essentially double-down on agriculture and commit even more strongly to it as a subsistence strategy, which has the net effect of increasing population size, which then increases hunting pressure—a one-two punch,” he says.