Life Inside the Olympic Zone

Nordic skier Julia Kern ’19 recounts how Dartmouth helped get her to the Games. 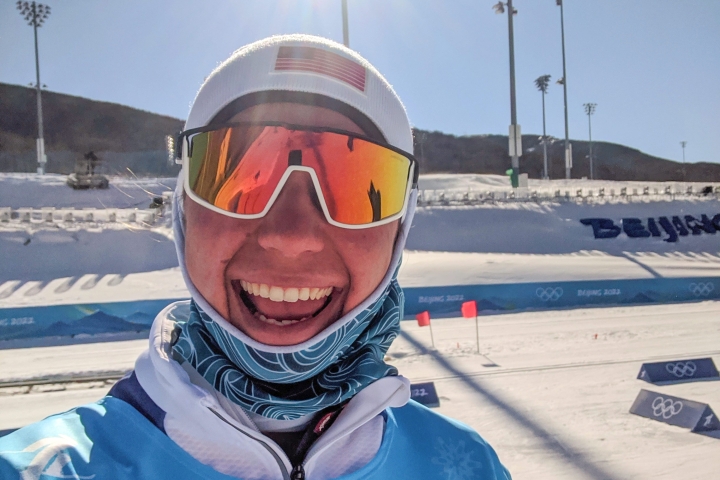 Dartmouth’s Winter Olympians in the Heat of Competition

Olympian Julia Kern ’19 was one of eight athletes with Dartmouth ties to compete in the 2022 Beijing Winter Games. The cross country skier, who grew up in suburban Boston, finished 18th in the women’s freestyle sprint and 53rd in the women’s skiathlon, and also photographed some of the activities with teammates while in China.

Dartmouth News asked Kern to share some of what she saw and experienced at the Olympics, and how Dartmouth helped prepare her for the premier athletic competition in the world. Here is the account she filed last week from Whistler, British Columbia, where she won the 10-kilometer classic and some other races in the U.S. SuperTour Finals/Canadian Ski Championship.

Like many little kids, I dreamt of competing at the Olympics, but it wasn’t until the end of high school that the parts really started to fall into place. A month before graduating from Waltham (Mass.) High School in 2015, I was named to the U.S. Ski Team. 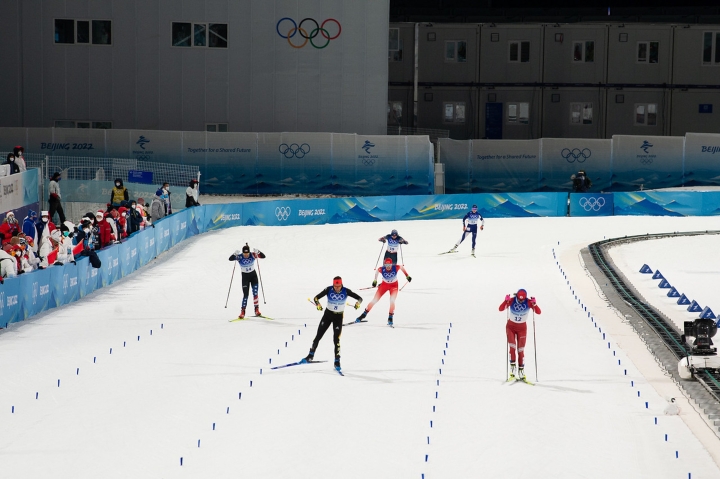 Julia Kern ’19, at far left, in a sprint heat at the 2022 Beijing Winter Olympics in February. (Photo by Mark Clavin/U.S. Ski & Snowboard)

I had to make the big decision of whether I should attend college, let alone which school to attend; take a gap year; or forgo college altogether and go all-in on professional skiing.

I wanted to make it to the Olympics, but I also wanted to get a quality education and pursue my other passions outside of athletics. Fortunately, Dartmouth seemed to be the best place for me to pursue both academics and athletics to the highest degree, all at the same time. Six years later, I fulfilled my Olympic dream and completed my undergraduate degree with a major in economics and a minor in human-centered design.

To do so, I forged my own path, taking a partial gap year until the spring semester and then enrolling at Dartmouth as a full-time student, but with a flipped schedule. I attended spring, summer, and fall terms, leaving the winter term open to follow ski race opportunities around the world.

I spent my terms at Dartmouth feeling engaged and challenged in my courses, while training full time at school with the Dartmouth Ski Team and with the U.S. Ski Team in the winter and at training camps between quarters. Fortunately, I could work closely with professors to minimize the material I missed when I couldn’t attend classes.

It was also important for me to fully experience the social aspect of college, spending time with friends socializing on the Green, staying up late at night in Thayer designing solutions to human-centered needs, or debating greater issues at large. My time at Dartmouth was definitely fast-paced, and stressful at times, but I loved the mental and physical stimulus I found on campus. Dartmouth taught me efficient time-management skills, how to overcome setbacks, and how to approach new challenges with a growth mindset and open mind. 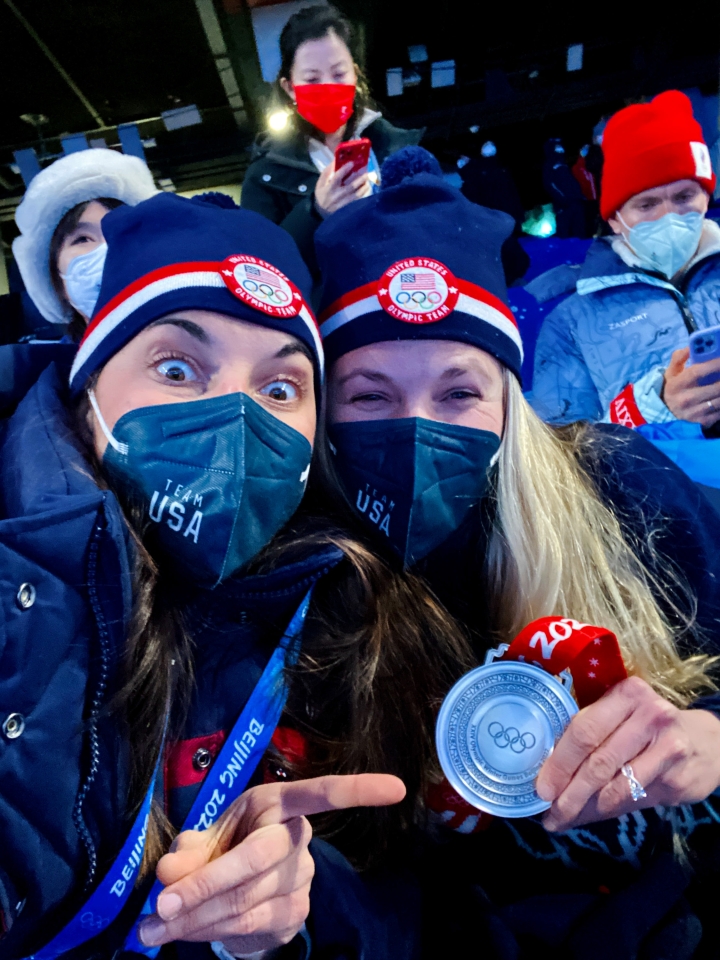 Julia Kern ’19 takes a selfie with teammate and friend Jessie Diggins as they celebrate Diggins’ silver-medal finish in the 30-kilometer cross country race at the 2022 Beijing Winter Olympics. (Photo by Julia Kern ’19)

These lessons were important as I headed into my first Olympics, given the unique pandemic situation, compounded by traveling to a country with ongoing controversial issues and laws. We entered the “closed loop” upon arrival in Beijing, a bubble that consisted of only Olympic athletes, staff, media, and workers who were tested every day and never mixed with the general public.

My time at Dartmouth was definitely fast-paced, and stressful at times, but I loved the mental and physical stimulus I found on campus.

The closed loop was likely one of the safest COVID-19 environments created for such a large operation, but it also made for a surreal experience. My daily routine consisted of waking up at 11 a.m., taking a closed-loop bus to the venue, training around 2 p.m., riding the bus back to the Olympic Village, and spending the remainder of the time in our apartment or exploring the small confines of the village until I went to bed at 1 a.m.

The cross country venue and the Olympic Village where I was staying was in Zhangjiakou, more than 100 miles from Beijing, in a desert environment along the Great Wall of China, with little natural snow and recently planted small trees to offer a little bit of wind protection. Although the skiing environment was unlike anything I have experienced, it also felt weirdly normal—at the end of the day, ski racing is still just ski racing no matter where you are.

The Olympic Village, which was under 100 acres in size, closely resembled campus life, with my peers living right next door in other buildings and a massive dining hall where everyone congregated. I didn’t realize how much I missed the convenience of having everyone within walking distance until I was in the village, cruising around on my bike and thinking back to my favorite Dartmouth days, biking everywhere I went.

Each athlete received pins from their country or sport and one of the Olympic traditions is to trade those pins with others. The act of pin trading offered a great excuse to break the ice and meet new people from around the world. I enjoyed the social aspect of getting to know people this way, or saying hello to people as I walked across the courtyard. Unfortunately, the weather in February was a bit too chilly and windy to sit outside and socialize.

Athletes at the 2022 Winter Games traded pins from their home country, an Olympic tradition among participants, and a way to pass the time in between competition days. (Photo by Julia Kern ’19)

As with a Dartmouth term, some days and weeks were particularly stressful or busy—competition days were like exam days in college—and some days there was a lot of downtime to hang out with teammates and shoot hoops in the Athlete Resource Center or explore the village to see what other activities were going on.

I also was experiencing ups and downs with my emotions in competing in the Olympics, with large swings between the euphoria of living a childhood dream and having a great race, and the lows of falling short of my goals despite the hard work and preparation I put in. 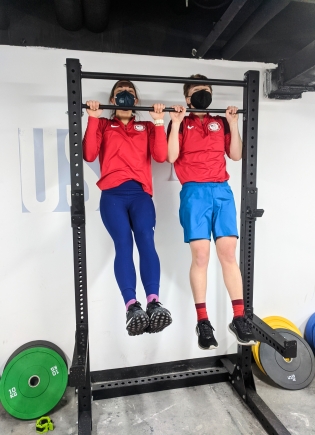 Julia Kern ’19 does pull-ups along with teammate Hannah Halvorsen, right, at the Team USA mini-gym at the Olympic Village in Zhangjiakou, China. (Photo courtesy of Julia Kern ’19)

I had a very disappointing first Olympic race, but drawing from my lessons at Dartmouth, I learned from my mistakes and pulled it together for the next big day, the sprint race. I was really proud of turning things around in a matter of three days to execute a solid sprint race, placing 18th at the end of the day. A lot of college and sport consists of delayed gratification and learning from mistakes, something that has become my strength over the past seven years through lots of practice.

Once I knew I had no more races, I explored the boundaries of the closed loop at the Olympics, attending four events in person: the women’s biathlon, the women’s aerials finals, and the men’s and women’s ski halfpipe finals. It was so cool to cheer on other athletes from Team USA, many of whom I knew to some extent, and I got to hang out with other staff and athletes.

I don’t think there will be many times in my life where I will be giving 100% of my focus to one goal as I did at the Olympics, so I am grateful for the chance to experience and embrace that opportunity.

However, as I left the Olympics and reintegrated into my seemingly more “normal” life of finishing off the World Cup season while working part-time as a user interface/user experience designer for an app called Pastimes, I was reminded how important it has been for me to have balance in life.

Back in my regular routine, I found myself racing faster and feeling happier pursuing both my athletic and nonathletic passions.

I am thankful that seven years ago my choice between skiing and academics did not have to be an either/or decision, but rather an opportunity to pursue both simultaneously in an environment that challenged me, supported me, and allowed me to grow as a person. 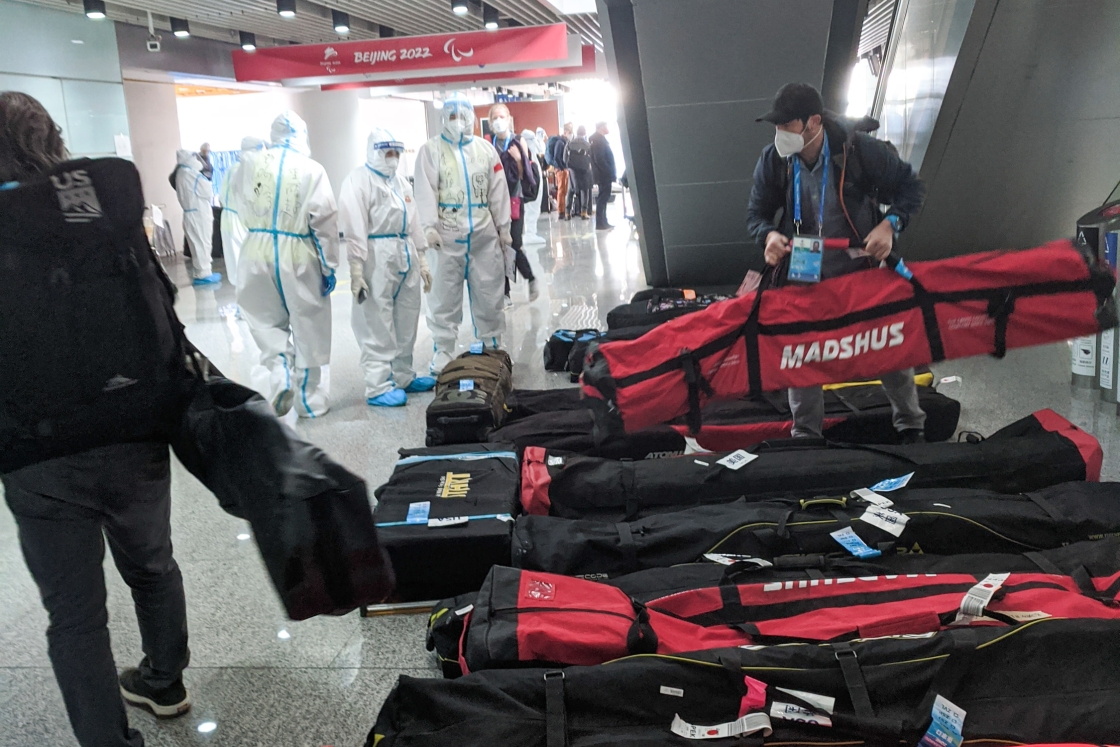 Caption
Skis for the U.S. team await loading at the airport after athletes arrived for the 2022 Beijing Winter Games. (Photo by Julia Kern ’19)
Image 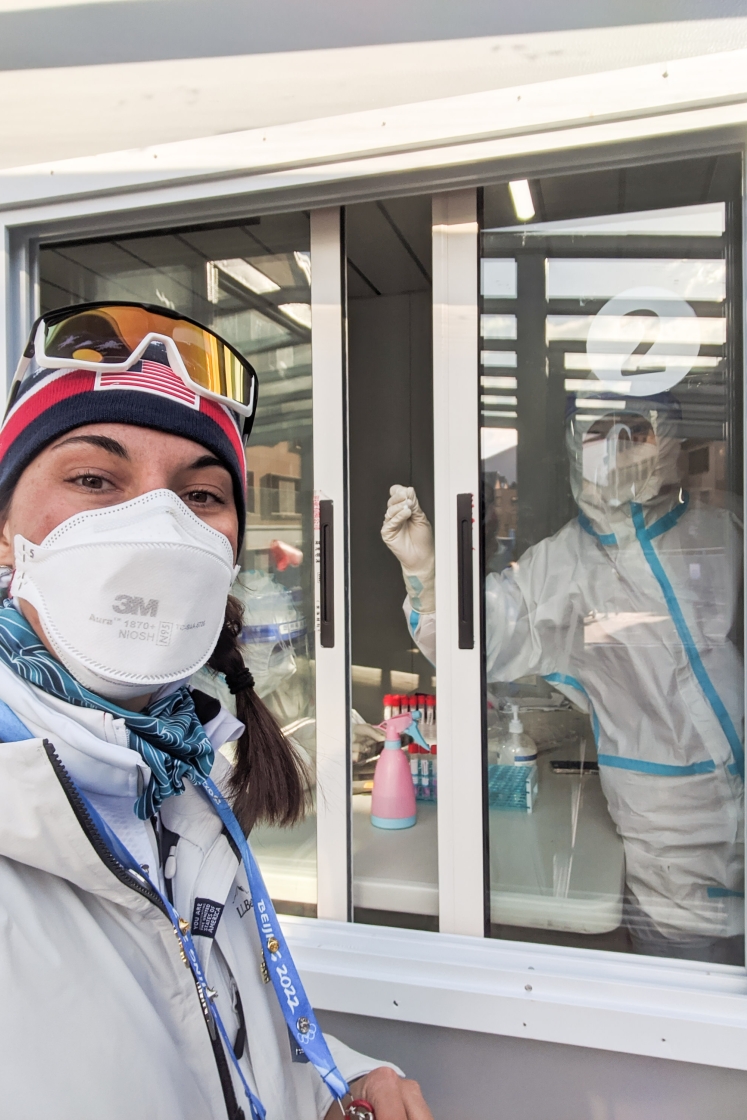 Caption
Daily testing for COVID-19 was among the strict safety protocols Julia Kern ’19 and other Olympians had to follow at the 2022 Winter Games. (Photo by Julia Kern ’19)
Image 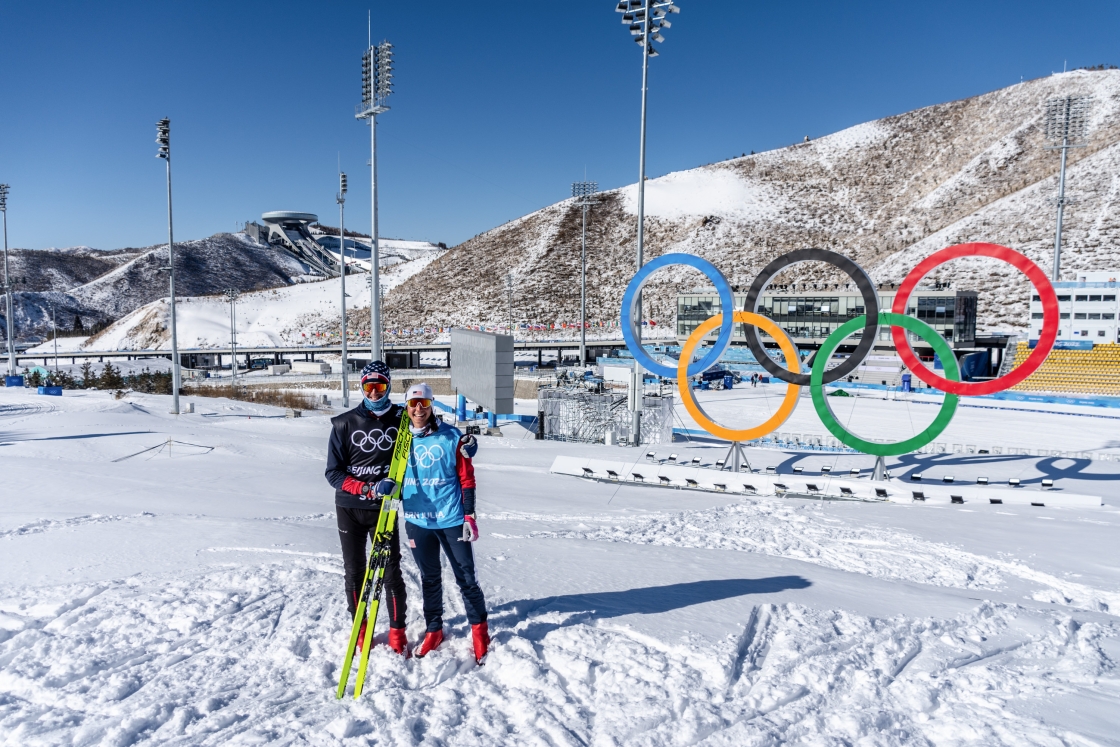 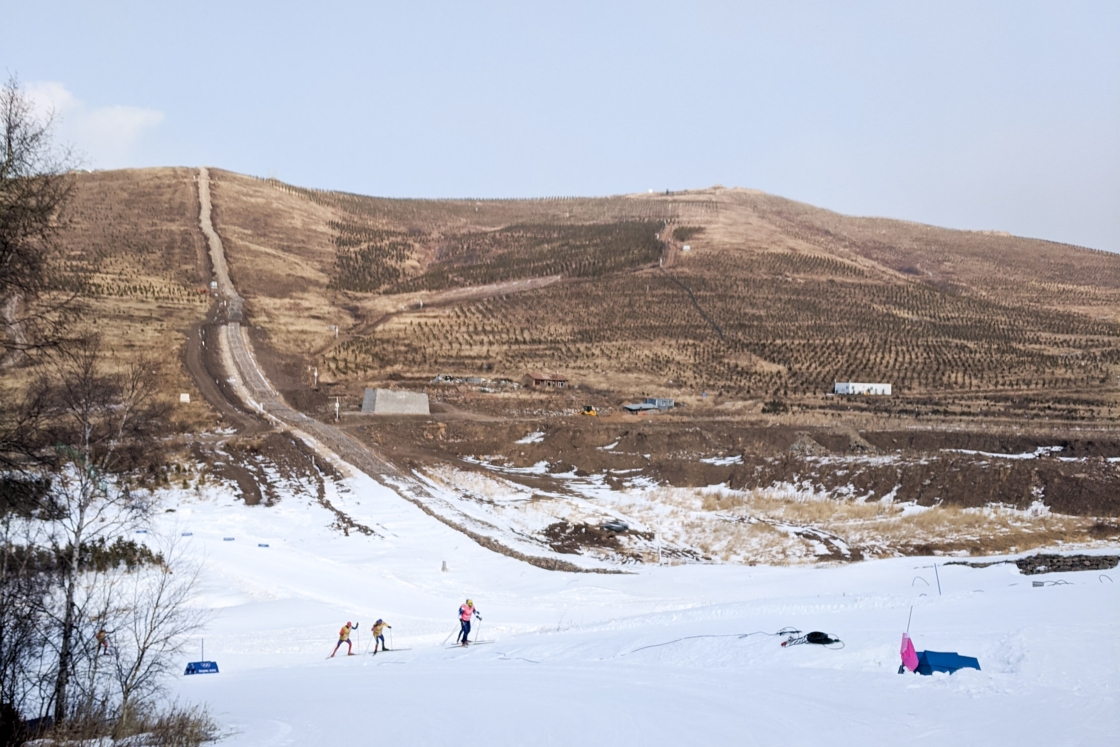 Caption
A cross country course at the 2022 Winter Olympics wound near the Great Wall of China, more than 100 miles northwest of Beijing. (Photo by Julia Kern ’19)
Image 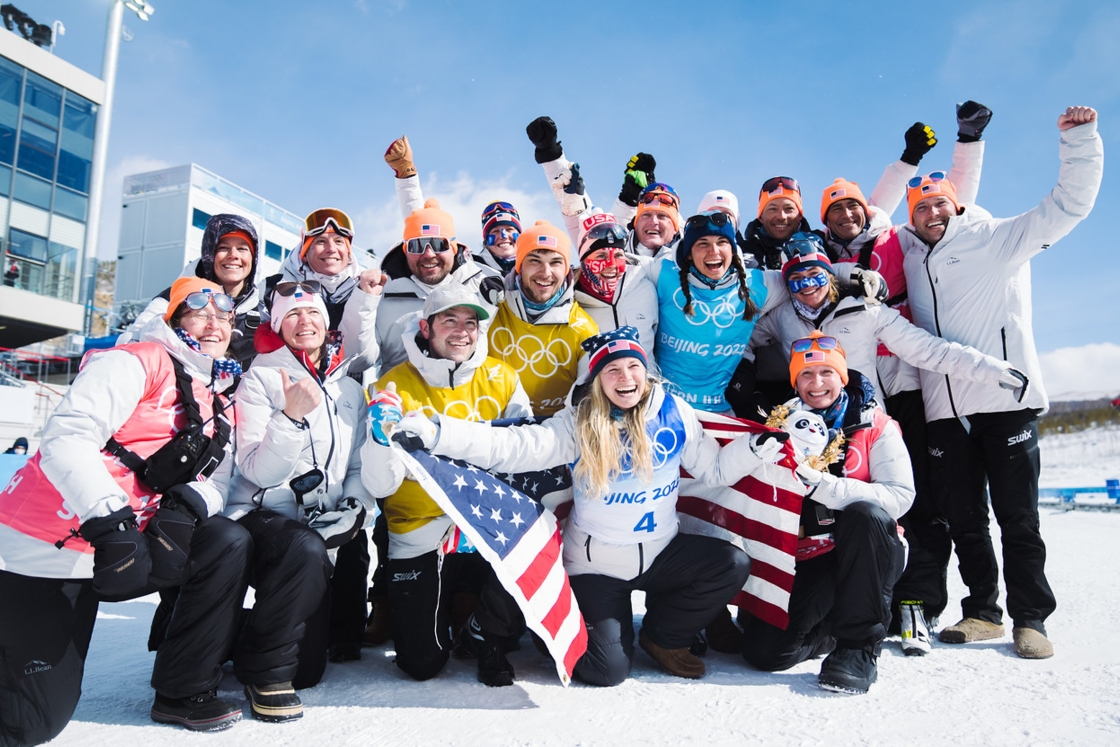