Interims since summer, Scott Frew and Dianne Ingalls are named to permanent roles. 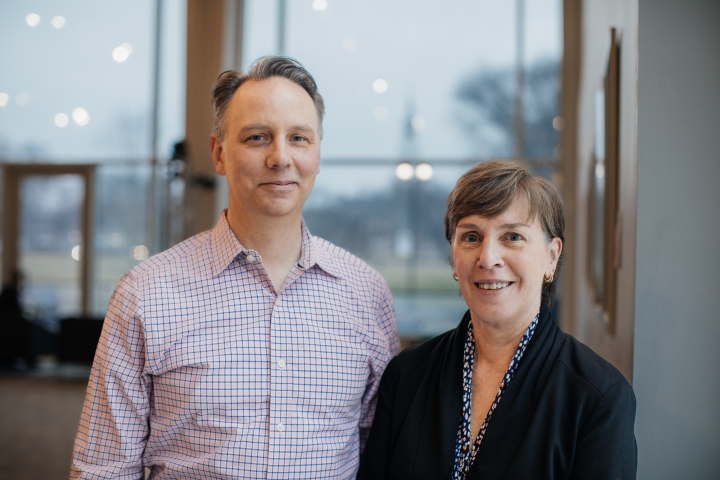 Frew has served as interim vice president for finance and treasury since Aug. 30. His appointment is effective immediately.

“Scott is an innovative leader whose skillful oversight has played an important role in further solidifying Dartmouth’s financial foundation,” Mills says. “With his commitment to transparency and forward-thinking approach, he is the right person to lead the finance team.”

Mills also announced that Dianne Ingalls ’84, Tuck ’88, has been named vice president for finance and controller, also effective immediately. She has served as interim in that role, also since Aug. 30.

Frew and Ingalls were named as co-interim vice presidents for finance following the departure of Mike Wagner, who left Dartmouth last summer after serving here for 20 years, most recently as chief financial officer, to become vice president for finance and operations and college treasurer at Williams College.

As CFO, Frew will be responsible for oversight of functions that span the institution, including financial planning, debt and cash management, endowment administration, and insurance. He will build on solid financial management practices that exist at Dartmouth, focus on maintaining and improving the institution’s financial strength in response to economic and other factors, and support the Board of Trustees’ Resources Committee and Investment Committee.

“I am excited and humbled by the opportunity to continue to support and advance Dartmouth’s financial goals,” says Frew, who reports to Mills. “We have a great team, and I have enjoyed working with Dianne, so I am delighted with her promotion.”

He received an MBA from Babson College and his undergraduate degree in business from the University of Calgary.

Ingalls says she’s eager to take on the VP finance position and continue to build on Dartmouth’s strong foundation in finance.

“Scott and I have worked together for a long time, and we understand and appreciate each other’s strengths,” she says. “I look forward to continuing to work closely with him and the entire finance team on the important work we do to support the financial operations of the institution.”

As vice president for finance and controller, Ingalls will report to Frew, provide leadership to financial operations within the division and across the institution, and provide oversight for critical policies, procedures, and systems associated with management of Dartmouth’s financial resources and business operations. She also will support the Board of Trustees’ Audit and Oversight Committee.

A licensed CPA, Ingalls began work as Dartmouth’s director of financial reporting in 2004, and in 2012 became associate controller. In 2020, she was named assistant vice president and controller. Before working at Dartmouth, she held controller and chief financial officer roles in manufacturing, technology, and service organizations.