The scholarships will allow two Dartmouth students to study theology at Oxford. 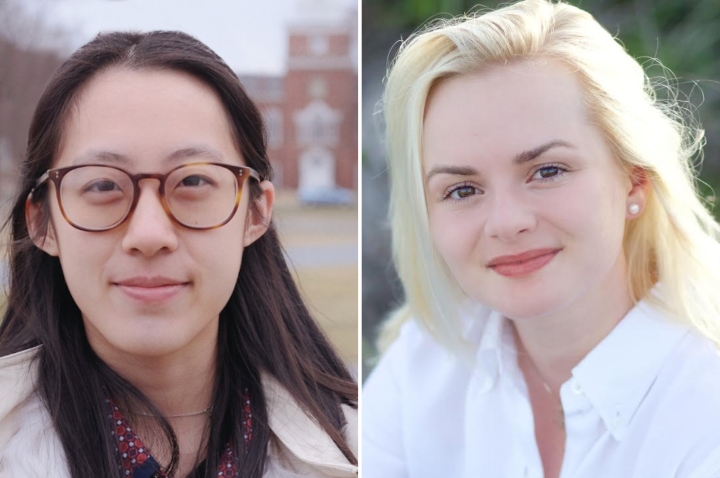 Victoria Xiao ’22 and Rachel Gambee ’21, who will both graduate this spring, will attend the University of Oxford next year, supported by the John and Daria Barry Scholarship, which was awarded for the first time this year to Dartmouth students.

“The Barry Scholarship is unique in that students cannot apply for it directly. Instead, candidates are nominated by an independent body of scholars, in recognition of their academic vocation and pursuit of truth. Because they have to be recognized by senior scholars, rather than putting themselves forward, candidates must be of the highest merit. We are thrilled to have our first two recipients this year. It’s an acknowledgement of their successes and the academic and community networks on campus that mentored them,” says Christie Harner, assistant dean of faculty for fellowship advising.

We are thrilled to have our first two recipients this year. It’s an acknowledgement of their successes and the academic and community networks on campus that mentored them.

Gambee, from Vero Beach, Fla., majors in religion and Middle Eastern studies. “In my senior thesis, I investigate the intellectual roots of Humanae Vitae, the 1968 Encyclical Letter of Paul VI, which banned birth control for Catholics,” she says. At Oriel College, Oxford, where she will read the MPhil in theology, Gambee will study how certain branches of theology intersect with political theory, examining “the role of faith in theories of liberalism and the ethical questions raised by the influence of theology on public institutions.”

She’ll pursue a two-year master’s in theology, specializing in Christian ethics. “American programs tend to be focused on the history of religion, comparative religion, or the anthropology of religion,” says Gambee. “I want to go to the UK to get a better grounding in political theology, and theology more broadly, before returning to the U.S. perhaps to enter a doctoral program.”

Xiao was born in the U.S., but her parents live in China, and she grew up in Beijing. A philosophy major who studies phenomenology, Xiao is interested in Christian theology. Reading the MPhil in theology (New Testament) at St Cross College, Oxford, she plans to explore the “personal and immanent” dimensions of metaphysics. “We tend to think about ‘the subjective’ and ‘the objective,’ as separate things, but I think differently,” says Xiao, who has also researched topics related to political economy, with the help of the Dartmouth Political Economy Project and Undergraduate Advising and Research.

“Theology also provides an important lens for understanding political ideologies,” she says. Among the big questions she’ll be posing over the next two years is one about her own future in academia. “The Barry Scholarship gives you the chance to consider how to build a career on a philosophical foundation, and the financial support is a huge help,” she says.