The social justice activist warns that democracy “is very much on the ballot.” 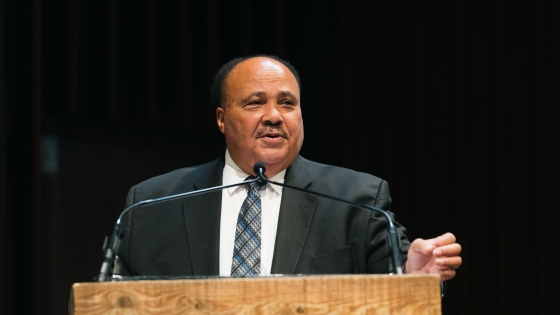 Holding up the work of his father and the civil rights movement to end racial segregation and ensure voting rights, King pointed to the U.S. Supreme Court’s 2013 decision that “eviscerated” the Voting Rights Act and subsequent laws in many states that he said are designed to suppress voting by people of color.

“Dad used to say ‘a voteless people is a powerless people.’ And one of the most important steps that we can take is that short step to the ballot box,” King said. “So I hope we see renewed activism to prevent and repeal voter suppression laws wherever they are passed. We need a strong turnout of people of color and white progressives—I just say white people, period—we just need people to show up and show out in the midterm elections, not just to secure our voting rights, but to truly save democracy.”

Speaking to about 600 people in Spaulding Auditorium or viewing a livestream of the ceremony, King also called for a moment of silence for the 13 victims in Buffalo, 10 of whom were killed in the May 14 shooting by a white supremacist. 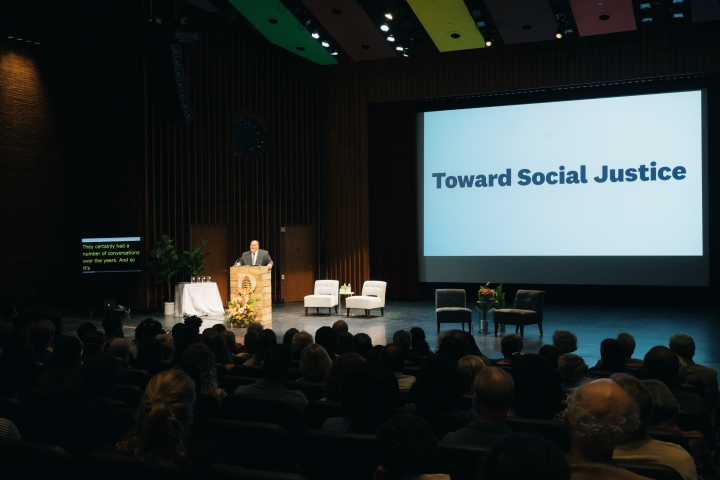 He said the “atrocity” in Buffalo was another example of how society has come to accept that racially motivated mass shootings are part of American life.

Of course we should pray for the families and loved ones of the victims, King said, but prayers must also be expressed in nonviolent action. “This hatred is growing. This division is growing, and until we are able to come together as a nation, and every elected official, regardless of party, is able to say this is unacceptable ... if we don’t condemn this kind of thing, it’s going to be so devastating. Humankind has got to be reengaged.”

The speech came 60 years to the day after his father, Martin Luther King Jr., spoke to an overflow crowd in Dartmouth Hall calling for federal protections of civil rights and voting rights for Black Americans. The eldest living child of civil rights icons King and Coretta Scott King, Martin Luther King III has also devoted his life to promoting civil rights and global human rights, including serving on the board of directors of the Atlanta-based King Center, and founding Realizing the Dream Inc., an organization devoted to facilitating nonviolence training in the U.S. and around the world.

In welcoming King to Dartmouth, President Philip J. Hanlon ’77 acknowledged that the path toward justice that Martin Luther King Jr. spoke of in Dartmouth Hall 60 years ago is long and complicated. Hanlon also mentioned the Buffalo shooting and acknowledged that such acts of hatred can cause us to despair. 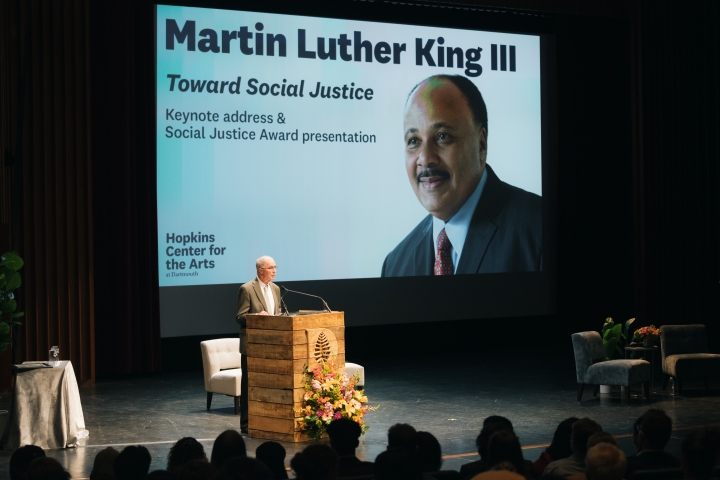 “But losing hope is not an option. If anything, these moments must motivate us to put our full intellectual might behind ending injustice and eradicating racism from every aspect of our society,” Hanlon said.

“Tonight’s distinguished guest, Martin Luther King III, has done just that. A lifelong civil and human rights activist, he has dedicated his entire career to ensuring that in spite of any obstacles we face on the path toward justice, the scale is always tipped in favor of progress.”

In his speech, King urged his listeners to support and demand public officials to back the Freedom to Vote act and the John Lewis Voting Rights Advancement Act. “These two bills can help to save democracy from those who seek to destroy it.”

We have to stay on our elected officials and let them know we expect them to protect democracy and freedom. We’re going to hold them accountable.

King challenged the audience, and specifically the students of Dartmouth, to take action by registering and turning out to vote, saying, democracy is “very much on the ballot this year.” He called for action to end partisan gerrymandering and overhaul the campaign finance system, passage of laws to safeguard against subversion of the electoral process, new gun safety laws, and the election of more women and people of color to public office.

“We have to stay on our elected officials and let them know we expect them to protect democracy and freedom. We’re going to hold them accountable,” King said. “So please don’t let it be said that the students of Dartmouth College shirked their citizenship responsibilities in 2022. Don’t let it be said that you didn’t have your say at the ballot box.”

King raised up student activists for their contributions to the civil rights movement and to social justice movements to the present day.

“It was great to see so many students in the leadership of the protests against the killing of George Floyd, and Breonna Taylor, and Ahmaud Arbery, to name a few.”

In his free-flowing address, King touched on many pressing issues of the day, at one point warning that in the Baptist preaching tradition, listeners are prepared for long sermons.

He suggested that citizens be able to use their smartphones to vote to increase democratic participation.

“It would seem that if we can take the devices that we have and pay our bills, do any kind of banking, make investments, why would we not be able to use them also to vote?” he said.

King also weighed in on the leak of a draft Supreme Court ruling that suggests the conservative majority may soon overturn the landmark Roe v. Wade decision on abortion, saying it is important to expand rights, not suppress them.

“All of us should be concerned about what’s going on at the Supreme Court. So, you know, I’m a Christian. But I’m not a Christian who believes that men should determine what happens to women,” he said to applause.

He also denounced the apparent silence of prominent billionaires on the issue of gun violence and the mass shooting in Buffalo, and said the controversy over critical race theory, which he noted is primarily a law-school level issue, was a “bogeyman that doesn’t even exist” in local schools.

“But it’s important that American children are taught truthful history,” he said.

And he brought his message home to evangelize the power of nonviolence, quoting his father, “The nonviolent approach does something to the hearts and souls of those committed to it. It gives them new self-respect. It calls up resources of strength and courage that they did not know they had. Finally, it so stirs the conscience of the opponent that reconciliation becomes a reality.”

Chara Abiah Lyons ’23, an E.E. Just Scholar from New York City, said King’s message spoke to her. “What I heard is for Black students on this campus to be able to stay in their power but know that they are heard, and they are seen despite the challenges they may go through.”

Garrison Wade ’22, noted that his parents grew up in rural Mississippi in the 1960s, when Martin Luther King Jr. was having a profound effect on improving opportunities for Black Americans.

“My mom was born in 1962, and she lived through this. To hear someone speak whose father did so much for people like her meant a whole lot,” he said.

And Anyoko Sewavi ’23, also said it was gratifying to have King help recognize the work the DBSAA is doing.

Shontay Delalue, senior vice president and senior diversity officer, paused during her introduction to the Social Justice Awards to recognize the “families in Buffalo who are grieving the loss of their loved ones at the hands of a sadistic white supremacist.”

Delalue spoke about a vigil for the Buffalo victims on campus last week.

“As we gathered and sang, read poetry, prayed, and at times sat in silence, I felt a combination of pain and power,” she said. “The awardees tonight recognize that social justice work is bigger than any one individual.” 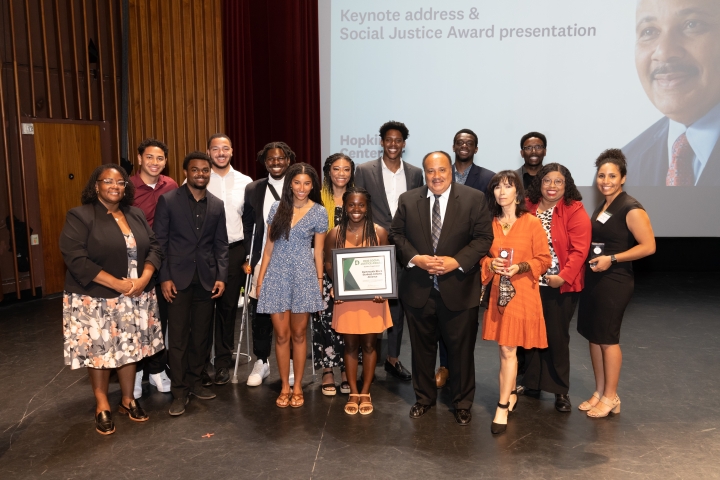 King met and posed for photographs with Social Justice Award winners, including members of the Dartmouth Black Student-Athlete Alliance, along with Senior Vice President and Senior Diversity Officer Shontay Delalue, at left. (Photo by Eli Burakian ’00)

The 2022 Social Justice Awards Honorees were:

Anais Ovalle, Geisel ’22, received the Emerging Leadership Award, recognizing an individual who has served less than 10 years in a chosen field of work or is a recent graduate.

And the Dartmouth Black Student-Athlete Alliance received the Student Group Award, honoring a student group for its commitment to promoting social justice in our community and beyond.

The program was co-sponsored by the Nelson A. Rockefeller Center for Public Policy and the Social Sciences, the Hopkins Center for the Arts, The William Jewett Tucker Center, The Ethics Institute, Centers Forum at Dartmouth, Dartmouth Center for Social Impact, The John Sloan Dickey Center for International Understanding, and the Office of Institutional Diversity and Equity.

In closing remarks, Delalue thanked King for continuing his father’s legacy, and concluded, “Like our Social Justice Award winners have demonstrated by their work, we all can play a part in solving the inequities in our nation. We still have a ways to go but I am confident we can get there together.”