Dartmouth community weighs in on the impacts of the Supreme Court decision. 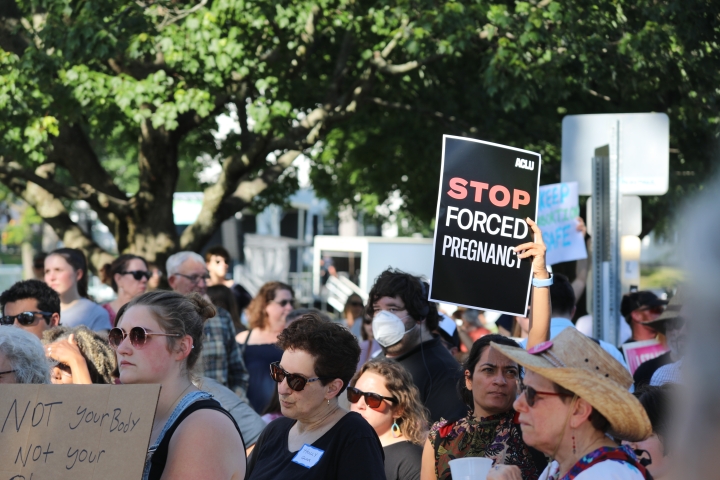 Protesters rally Friday evening on the Green after the Supreme Court struck down a constitutional right to abortion. (Photo by Erin Supinka)
6/24/2022
More Reading

The Supreme Court’s decision to strike down a constitutional right to abortion that had been in place for 49 years reverberated through campus on Friday, prompting more than 150 students, faculty, and community members to rally on the Green.

The crowd chanted, cheered the students, state lawmakers, and others who spoke in support of reproductive freedom, and waved as drivers honked their horns in response to signs that bore such messages as “Bans Off Our Bodies” and “Real Men Trust Women.”

Carolina Brown-Vasquez ’24, of Alexandria, Va., rolled up on her bicycle to listen to the speakers.

When she’d heard the court’s decision that morning, a “wave of sadness” had come crashing over her, the psychology and anthropology student said. “It’s really scary and sad to see the U.S. take steps backwards.”

Nearby, Griffin Thomas ’24, a theater and history major from San Mateo, Calif., also stood in the early evening sun, listening to the short, impassioned talks. He owed it to his female friends “to be out here and to make sure they stay safe in whatever they choose to do,” Thomas said. “I hope that we can get Roe v. Wade back.”

In its ruling on Dobbs v. Jackson Women’s Health Organization, the court upheld the Mississippi law that would ban nearly all abortions after 15 weeks. The decision also overruled Roe v. Wade and places abortion law in the hands of state legislatures.

Nearly half of the states were poised to ban or restrict abortion, and some took effect immediately. Some 16 states and Washington, D.C., currently have laws protecting access to abortion.

Dartmouth released a statement Friday afternoon on the decision.

“Dartmouth’s commitment to reproductive health care, autonomy, and well-being for every member of our community is unwavering. Dartmouth is fortunate to have a medical school that is deeply committed to reproductive rights for all, including childbearing decisions, maternal health, and their effect on families through its research and education missions. As a medical school focused on training supportive health care professionals, the Geisel School of Medicine will continue promoting better health outcomes and access for women and people from all gender identities,” the statement said.

“Across the institution, Dartmouth will continue to offer insurance coverage to our students and to our employees and their families through a national medical network in support of reproductive health and in compliance with federal and state law. Such care includes pregnancy termination, infertility services, counseling, and family planning.”

Faculty and other community members also shared their thoughts about the implications of the ruling with Dartmouth News: 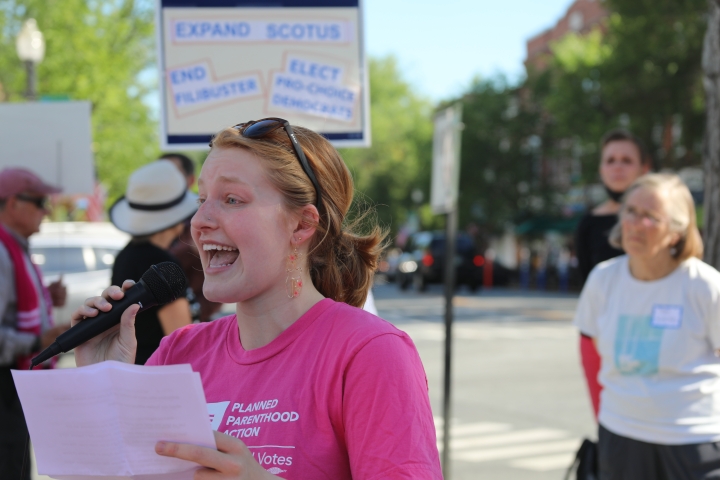 Today, I am in mourning. I grieve with those who fought so hard for Roe to be law of the land, now living to see it fall not even 50 years later. I grieve with those who will now be affected by this decision, those who will be forced to travel outside of their state lines in order to receive abortion care. I grieve with people who cannot afford to take time off work and pay unnecessary travel expenses in order to receive abortion care. I grieve with Black and Indigenous people and people of color, LGBTQ+ people, and disabled people, who already experience racism and discrimination when it comes to reproductive care, and who will now face greater abortion restrictions in their communities with this decision. We are all in mourning today over what has been lost, but we are also angry—at the Supreme Court, at legislators who want to take away our right to choose. We are angry at politicians who want to control our futures and make decisions about our bodies without our consent. 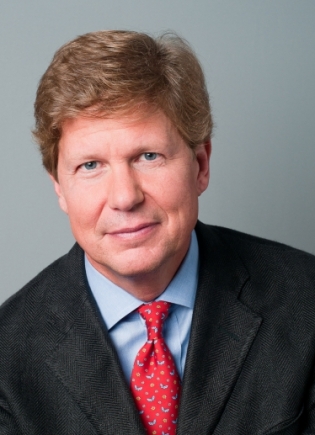 On the face of it, the Supreme Court’s Dobbs decision is cause for great celebration for the religious right, and I have no doubt they will treat it as such. This moment, according to their own narrative, represents the culmination of a half-century’s efforts to overturn a grave wrong.

Well, not exactly. Evangelicals came late to the antiabortion cause; they considered it a “Catholic issue” throughout the 1970s. The religious right mobilized as a political movement in the late 1970s to defend racial segregation in their institutions, including Bob Jones University and various church-sponsored segregation academies. Abortion was cobbled into the religious right’s agenda much later, just in time for the 1980 presidential election.

As a historian, I can’t help wondering if the Dobbs decision doesn’t have a parallel in the 18th Amendment, the Prohibition amendment. Evangelicals of an earlier age celebrated ratification of the amendment, but it turned out to be a pyrrhic victory. Prohibition became unenforceable, and it led to rampant lawlessness.

The lesson? I’ve long believed that abortion should be treated as a moral issue, not a legal matter. (The only thing both sides of the abortion debate agree on is that making abortion illegal will not materially affect the incidence of abortion.) If the anti-abortion people truly care about limiting abortion, they would do well to focus on changing the moral conversation around the issue—as well as advocating sex education and making contraception more available. 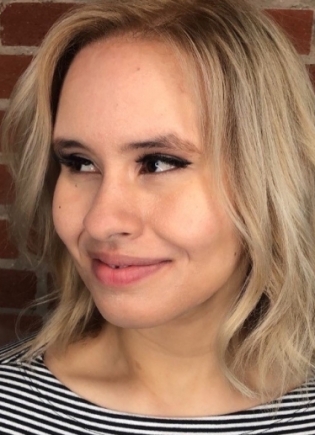 Roe v. Wade’s overturn is shattering but not surprising. Anti-abortionists have been working toward overturning Roe for over a decade. Texans have been suffering the life-threatening and life-diminishing consequences of anti-abortion legislation for just as long, and now approximately 36 million people who can become pregnant will suffer those same consequences.

What I find particularly egregious about the decision is Justice Samuel Alito’s invocation of previous comments from Justice Clarence Thomas, which allege that access to abortion is “eugenic.” Footnote 41 of the opinion states, “Other amicus briefs present arguments about the motives of proponents of liberal access to abortion. They note that some such supporters have been motivated by a desire to suppress the size of the African American population…”

What is egregious about this part of the decision is that it’s not only a red herring but boldly mischaracterizes eugenics in the U.S. context. According to Thomas, having access to abortion harms Black women, but this couldn’t be further from the truth. 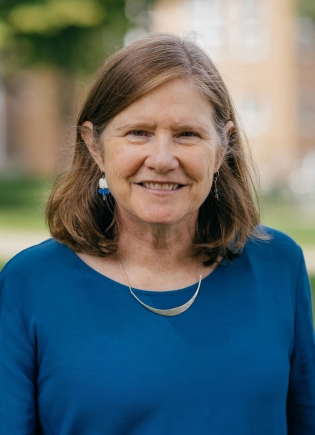 Ann Bumpus
Senior Lecturer, Institute for Writing and Rhetoric, Department of Philosophy, and Program in Women’s, Gender, and Sexuality Studies

Today’s Supreme Court decision, which overturned both Roe v. Wade and Planned Parenthood v. Casey, makes explicit that abortion is no longer a fundamental right in the United States. In other words, whether a pregnant person will be able to have an abortion (and often therefore whether she will continue in school, keep or land a desirable job, or have the resources to care adequately for existing children) is to be decided at the state level.

This means that in some states, effective immediately, even a young girl who has been raped will have no access to abortion.

While some Americans will laud the decision as a win for life, this ‘win’ comes at a draconian cost to women who may now be forced by law to carry an unwanted pregnancy to term.

Philosophers have long noted that we do not require people to cede their bodily autonomy in other situations, even when doing so would save a life.

We do not allow doctors to give life-saving treatment against a patient’s will. Likewise, we do not require people to give up a kidney even to save the life of someone in dire need of a transplant, nor would we tolerate the Supreme Court leaving up to the states whether to adopt a policy of kidney conscription.

As a philosopher, with expertise in medical ethics, I am deeply dismayed by many aspects of today’s decision, including the distorted way in which various long-standing philosophical positions were presented. As a U.S. citizen, I’m concerned about the future of democracy, given the increasing politicization of the Supreme Court.  As a college professor, I’m devastated for the young women whose dreams are jeopardized and who are significantly less free and equal today than they were yesterday. 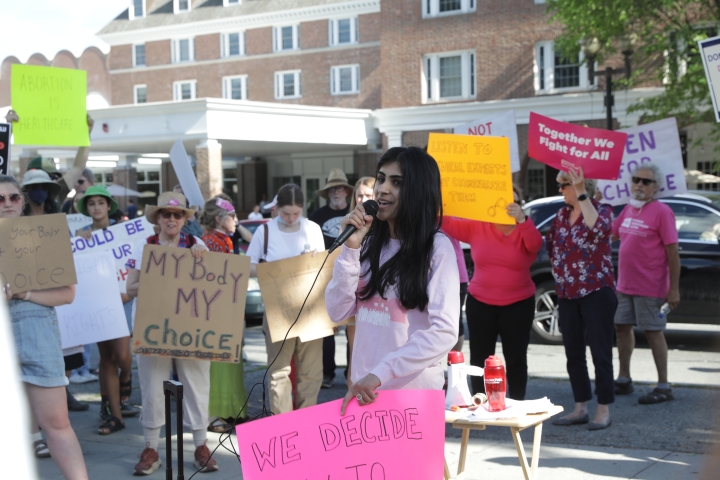 As a health care volunteer from Texas, I have witnessed firsthand the harm caused by hindering access to essential reproductive care, including Friday’s ruling. Science, medicine, health care, and history unequivocally affirm the importance of access to safe, legal abortions, to the extent that anti-choicers have to resort to fabricating medical information to feign affirming life.

Through the spread of medical misinformation and fearmongering, the anti-choice movement implements its disgusting, white supremacist agenda into the law. In reality, restricting access to abortions does not reduce the number of abortions.

There is nothing that upholds the dignity of human life more than access to safe, legal abortion as provided by a qualified medical professional. Abortion is health care. Abortion saves lives. I am proud to aid and abet abortions.

“Dartmouth Health is unwavering in its belief in the sanctity of the patient-physician relationship to make the best-informed decisions for patients to reflect their needs and healthcare priorities,” the health care system said in a statement.

“We also strongly believe that abortion is an essential component of health care. Like all medical matters, decisions regarding abortion should be made by patients in consultation with their health care providers. Abortion remains legal and accessible in New Hampshire and Vermont, and Dartmouth Health will continue to provide this care as part of our commitment to our patients.”

And the Dartmouth College Health Service reiterated on Friday that it is committed to the sexual and reproductive health of Dartmouth students.