The prestigious awards provide the scholars a year of research time. 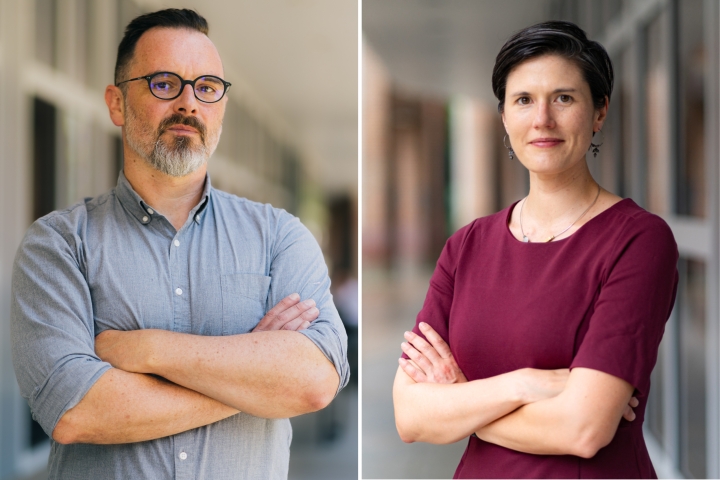 Damiano Benvegnù, a senior lecturer of Italian, and Elizabeth Lhost, a lecturer in history and a postdoctoral fellow in the Society of Fellows, have received fellowships from the American Council of Learned Societies. They join a cohort of 60 early-career scholars in the humanities and social sciences to receive the prestigious award this year, selected from nearly 1,000 applicants.

The fellowships, which provide $30,000 to $60,000 for six months to a year of research and writing, support “outstanding scholarship in the humanities and interpretive social sciences,” according to the ACLS website.

Damiano Benvegnù: Seeing the Political Forest for the Trees

In the late 1930s, Italian dictator Benito Mussolini ordered 20,000 fir trees planted on a hillside to commemorate the construction of a new aqueduct. Mussolini’s regime fell in 1943, but his forest—which spells out D-U-X, his Latin title—remains.

“This forest is a unique case of political landscape that survived the political circumstances in which it was created,” says Benvegnù, who is using his ACLS fellowship to study the cultural, political, and environmental ramifications of this living monument to Italian fascism. “You can travel to central Italy today and see these three giant letters on the side of a mountain from 100 kilometers away—from Rome, in fact.”

In addition to exploring archival records, Benvegnù, who holds doctoral degrees in Italian studies from La Sapienza University of Rome and in comparative literature from the University of Notre Dame, will conduct ethnographic interviews with local community members and plans to team up with ecologists to better understand how the forest has affected its environment. The research will contribute to Benvegnù’s second book.

Benvegnù is part of a growing interdisciplinary field known as environmental humanities, which seeks to explore “the peculiar cultural component that is inevitably embedded in every kind of ecological concern,” he says.

“I go back to the root of the word ‘ecology,’ from the Greek oikos, which means ‘dwelling.’ Every environmental concern is not just a matter of the physical sciences but is really about how we dwell as a human community with other, nonhuman communities on this planet.”

While conducting research as a fellow at the University of Cambridge, Benvegnù became interested in critical animal studies—“how we treat nonhuman animals, but even more deeply, how we define ourselves as human often in opposition to what is nonhuman, and how this definition is not just biological, but deeply cultural and political,” he says.

That research became his first book, Animals and Animality in Primo Levi’s Work, which explores how Levi—a Holocaust survivor—incorporated animal imagery into his writing. “During the Nazi genocide, the Nazis made a distinction between what was human and what was not, and categories of humanization, or even animalization, were applied to certain human groups,” Benvegnù says.

Of receiving the ACLS fellowship, Benvegnù says, “As a nontenure track scholar at Dartmouth, I don’t have a lot of opportunity to focus exclusively on research. So I’m incredibly grateful that the fellowship will give me the opportunity for one year to do exactly that.”

Elizabeth Lhost: At the Intersection of Religion and Modern Finance

A historian of South Asian law and religion, Lhost plans to use her ACLS fellowship to explore what happened when colonized 19th- and early 20th-century societies were forced to adopt European and American financial vehicles such as insurance and the legal trappings around them.

The invention of insurance—a structured hedge against future losses—was one of the drivers of the global maritime trade that helped spur industrialized capitalism, turning uncertainty itself into a commodity that could be bought and sold.

“We think about insurance as pretty straightforward, but for some of the Muslim figures I’ve studied, the question of what insurance is protecting against raised issues about whether it was permissible according to Islamic understandings of risk,” she says.

Lhost, who earned her PhD at the University of Chicago, became interested in these differing conceptions while researching her first book, Everyday Islamic Law and the Making of Modern South Asia, which was published this summer.

“I started wondering what was going on when global trade that was largely dominated by European and American firms encountered other approaches to managing risk, to funding business ventures, to engaging in cooperative and collaborative business undertakings.”

The project is taking her to archives throughout the Indian Ocean region, from British Burma—now Myanmar—to Mauritius, investigating colonial legal proceedings and corporate records as well as documents “from civic associations like credit cooperative societies and Islamic organizations that were trying to provide alternatives, to see what the other side of the conversation looked like,” she says.

“One of the things I’m investigating is how the law worked to support the individualized financial instruments that were popular among European and American traders and to de-legitimate other forms, pushing individuals away from the community-based forms of mitigating risk that people had relied on in the past.”

The ACLS fellowship gives her the freedom to follow threads in her research wherever they lead, Lhost says.

“A fellowship like ACLS offers time to think. I have a clear sense of what I want to accomplish, but I know I’m going to find things in the archival sources that take me in other directions. Working through that requires patience and the understanding that it’s OK if the research doesn’t unfold as originally planned.”

Lhost and Benvegnù credit Dartmouth’s Grant Proposal Support Initiative, known as GrantGPS, with helping them navigate the application process for the ACLS fellowship.

“The team is so useful in helping communicate ideas,” says Lhost. “They helped me clarify the core kernel of this project and frame it in a way that resonates with people outside of my field.”

Benvegnù, an assistant director for interdisplinary studies at GrantGPS, encourages faculty interested in external funding to take advantage of the initiative. “Even if in the end your application isn’t ready, going through the process is incredibly valuable,” he says.