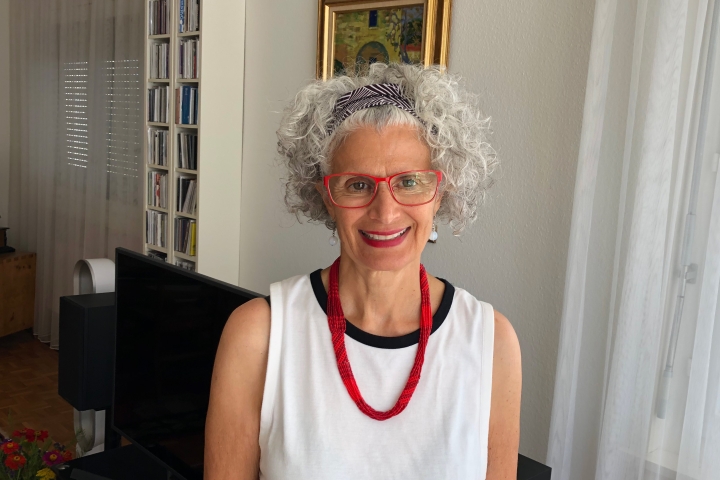 “What would be the point in becoming a highly educated person if you just kept it to yourself?”

This is the question that has driven Irene Kacandes, the Dartmouth Professor of German and Comparative Literature, to champion the public humanities and to find creative avenues to bring her research to general audiences.

“One of the goals of my career has been to contribute to conversations of my intellectual peers—but also to be understood by the general public,” she says. “The university is not separate from the public sphere, and our obligation is to help people better understand our work.”

This fall, Kacandes is beginning a new trans-Atlantic venture intended to do just that: she will be moderating a series of virtual and in-person conversations called “Humanities for Humans,” co-sponsored by the Berlin-based Walter De Gruyter Foundation—a nonprofit which stems from the international academic publishing company Der Gruyter Verlag—and 1014: Space for Ideas, a New York-based nonprofit currently funded by the German government and private donors.

The series will bring together high-profile scholars in the humanities to discuss hot-button current issues from a humanistic perspective.

The first conversation—scheduled for Sept. 27 in-person at 1014: Space for Ideas on Fifth Avenue—is “Racism and Fascism: A Love Story.” The event will feature University of Pennsylvania political scientist Michael Hanchard and City University of New York historian Dagmar Herzog in a discussion of the history, interconnectedness, and weaponization of those terms in the popular consciousness.

While the details are still being developed, Kacandes hopes that recordings of the sessions can be disseminated broadly. “I’m designing the first conversation to have lasting relevance—something teachers or university professors could use in their classes, and that will interest the general public.”

I love writing books, but it’s the contact with people that’s always moved me.

Kacandes’ research and teaching has long engaged general as well as academic audiences. An expert on the Holocaust and traumatic memory, she is the author of Talk Fiction: Literature and Talk Explosion; Daddy’s War: Greek American Stories; and, with Steve Gordon, Let’s Talk About Death: Asking the Questions that Profoundly Change How We Live and Die, among many other publications.

Recently she edited the volume On Being Adjacent to Historical Violence and co-edited (with Associate Professor of German Studies Yuliya Komska) Eastern Europe Unmapped: Beyond Borders and Peripheries.

Her public scholarship has in many ways grown out of her teaching. One recent example: In 2019 Kacandes and students from her popular course, “Nazis, Neonazis, Antifa, and the Others: Exploring Responses to the Nazi Past,” decided to launch a Facebook group to keep their discussion going.

“I had introduced some of my more theoretical work around witnessing trauma—a term I’ve been using for a while now called ‘co-witnessing,’ ” says Kacandes, referring to the practice of individuals standing in solidarity with those experiencing trauma and injustice.

That Facebook group, “Do Something,” now has nearly 200 members. “It’s about thinking about what people are actually doing and can do in terms of racism, in terms of degradation of the environment, in terms of people who are sick with COVID,” she says. (The group is private, to avoid trolling, but “anyone’s welcome to join, you just have to tell me why,” she says.)

Kacandes, who joined the Dartmouth faculty in 1994, has reduced her teaching load as she nears retirement. “In the introduction to my latest book, I talk about how rich a home Dartmouth has been for me,” she says. “Dartmouth cares about the humanities. My colleagues have been top-notch intellectuals and nice human beings at the same time, and my students are so energetic and creative and eager. I love writing books, but it’s the contact with people that’s always moved me.”

As a member of the Department of German Studies, she has frequently had the opportunity to lead foreign study programs in Berlin. “As someone who works in German studies but is not a native German speaker, it’s been wonderful to have that kind of connection to the country. It has given me intimate contact with Dartmouth students and introduced me to an international sphere that was very important professionally.”

Her impact on Dartmouth has been profound, as well. She served on the faculty committee that considered creating what would become the Leslie Center for the Humanities, as well as the committee that helped establish Dartmouth’s Jewish Studies Program. “The chance to be in on the ground on some of these initiatives taught me a lot,” she says.

Now, as she thinks ahead to retirement, she says, “I intend to stay very active professionally.”