Millan Named to Decadal Survey on Solar and Space Physics

Physics professor is co-chair of committee to advance research in heliophysics. 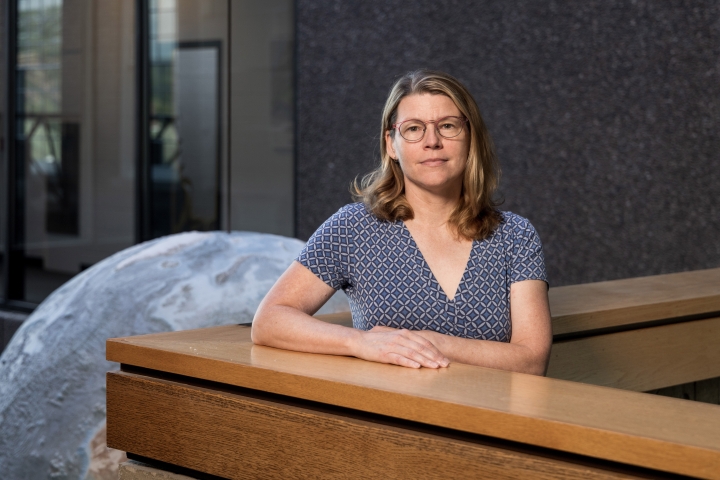 Every 10 years, the National Academies of Science, Engineering, and Medicine compile a report that is at once a wish list of proposed space missions and a roadmap for space research and exploration in the next decade and beyond. These so-called decadal surveys are conducted for each of NASA’s space and earth science disciplines.

Robyn Millan, the Margaret Anne and Edward Leede ’49 Distinguished Professor of Physics and Astronomy, has been selected to lead the 2024-2033 Solar and Space Physics Decadal Survey along with co-chair Stephen Fuselier, executive director of the Space Science Directorate at Southwest Research Institute in San Antonio, Texas. The survey is also sponsored by the National Oceanic and Atmospheric Administration (NOAA) and the National Science Foundation (NSF).

It’s really an opportunity to be at the forefront of helping to shape the future of heliophysics for the next 10 years.

Millan is an experimental physicist who studies the space environment around Earth. Using balloon experiments and small satellites, she investigates the Van Allen radiation belts, a region of space around the planet where very high energy particles are trapped by the earth’s magnetic field. The radiation belts are a harsh environment that spacecraft and satellites must navigate. Radiation belt particles may also cause damage to the ozone layer.

“I’m honored to have been selected to fill this role,” says Millan of her appointment. Recommendations from previous surveys have become reality—the Parker Solar Probe became the first ever mission to “touch” the sun and the Daniel K. Inouye telescope in Hawaii recently started operations, providing the most detailed images of the sun to date.

“The decadal surveys are a really important part of how federal funding gets decided for the space sciences in the United States,” says Ryan Hickox, professor and chair of the Department of Physics and Astronomy.

What is remarkable is that the surveys are something the entire community contributes to and gets behind, he says, so the leadership speaks for everyone. “It is a big responsibility, but also a testament to the regard in which she is held by her colleagues and the amazing contributions she has made to the field,” he adds.

Over the next two years, the co-chairs and a 16-member steering committee will consult with various stakeholders to identify key questions in the field of solar and space physics and the missions that can find answers, which can influence funding for major government agencies. Their report will outline a research strategy that will advance scientific understanding of the sun, the mechanisms that drive its activity, its effects on Earth and other planets, and the origins of space weather—changes in conditions on the sun and in space that impact human technology and activity.

Millan expects that this decadal survey will place an equal emphasis on fundamental science that seeks to understand our universe and more practical applications—the ability to forecast solar flares for example.

There is an emphasis on the so-called state of the profession, says Millan. “How do we increase the diversity in our field and create a more inclusive community that brings in people who will bring new ideas and fresh perspectives?”

The committee is also charged with investigating opportunities for the field of heliophysics to interact with other divisions of astronomy and astrophysics at NASA. Millan sees possibilities for scientists to collaborate with astrophysicists studying other planets in our solar system as well as those studying exoplanets orbiting other stars.

Millan is the first scientist from Dartmouth to be named co-chair of a decadal survey. Dartmouth alum and award-winning astrophysicist Fiona Harrison ’85, who received an honorary degree of Doctor of Science in this year’s commencement, co-chaired the 2020 Astro Decadal Survey.

Research proposals in astronomy and astrophysics regularly use the goals outlined in the decadal surveys as a touchstone, says Millan. “It’s really an opportunity for Dartmouth to be at the forefront of helping to shape the future of heliophysics for the next 10 years.”