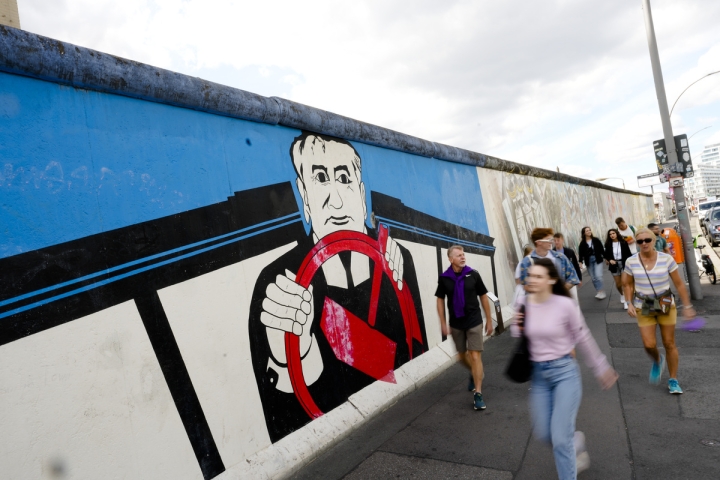 Tourists walk in front of a mural of former Soviet President Mikhail Gorbachev at the East Side Gallery, a part of the former Berlin Wall, on Wednesday. (AP Photo/Markus Schreiber)
8/31/2022
Body

Former Soviet President Mikhail Gorbachev, who died Tuesday at 91, is seen in the West as the man who ended the Cold War and in the East as the destroyer of Russia as a world power, Russia scholars say.

“No one will ever write a history of these events that doesn’t have Gorbachev playing a central role, but whenever anyone reflects on Gorbachev’s legacy, there’s always two sides, there’s always a Janus face,” says William Wohlforth, the Daniel Webster Professor who has been a scholar of U.S.-Russia relations since the 1980s.

“He failed in what he wanted to do, which was to turn the Soviet Union into a more humane version of itself, one that didn’t rely on coercion and lies and repression. That didn’t succeed and what followed was very painful for many within the Soviet world,” Wohlforth says.

But from a liberal, Western perspective, when the Soviet leader’s policy of liberalization, known as perestroika, unleashed the forces that led to the fall of the Berlin Wall and the opening of the former Eastern Bloc countries, Gorbachev’s refusal to resort to violence to hold onto power was heroic.

“The West, Europe and the United States, always associate Gorbachev with the end of the Cold War and his reluctance to use force to hold on to the Soviet Union’s positions in Europe, and for that we have to be grateful to him,” Wohlforth says.

The idea that the dissolution of the Soviet empire under Gorbachev was, in the words of Russian President Vladimir Putin “the greatest geopolitical catastrophe of the 20th century,” developed over the following 30 years, says Stuart Finkel, associate professor of Russian Studies.

“The idea of a ‘common European home’ that saw Russia and the West as, if not allies, at least partners through the idea of rapprochement, was furthered by his successor President Boris Yeltsin, and involved an unofficial understanding that NATO would not expand eastward into the former Soviet states,” Finkel says.

Putin and other hardliners came to believe that the West used this opening to bully and take advantage of a weakened Russia.

“If there is an area where Putin rejects Gorbachev directly, it is in this idea that the West can be trusted, that Russia and the West can be partners, and under Putin this was very gradual. It wasn’t an all-at-once thing. But, of course, since February of this year we see the tragic fruits of that in the war in Ukraine.”

But for the generation growing up in the Cold War, in the East and the West, the sense of hope inspired by the new openness, or glasnost, Gorbachev introduced cannot be overstated, says Lynn Patyk, associate professor of Russian.

It was this sense of possibility that inspired Patyk to pursue Russian at Middlebury College and to study in Moscow in the spring of 1989.

“There was this ferment, and this excitement, and this freedom in the air,” she says. “Even though Russians now don’t remember Gorbachev and perestroika fondly, at the time you could feel this pulsating and emerging life, and people, especially young people, were feeling that they were finally free to express themselves and to talk to foreigners, talk to Americans, without worrying that KGB agents were peeping over their shoulders.”

Finkel and Patyk say they were discussing the news commenting that they are curious to see how Gorbachev’s death is marked in Russia. While Putin has called the former leader’s legacy a catastrophe, Gorbachev, through his writing and his foundation, had remained committed to socialism, to Lenin, and to the Bolshevik revolution.

In fact Finkel, while working on research in Russia some 20 years ago, met Gorbachev in Moscow at a conference on the anniversary of the October Revolution. For the last 30 years of his life, particularly after the death in 1999 of his wife and political partner Raisa, Gorbachev led an isolated life out of the public eye in Russia, but continued to advocate for his political vision, says Finkel.

For Patyk, his legacy is clear.

“I wish there were more leaders like Mikhail Gorbachev, more world leaders concerned with the good of their people, with bringing freedom and democracy to fruition, to securing it, and not clinging to power using every means available,” she says.

“Unfortunately, we have too many politicians and dictators in the world right now who are unwilling to do that. I wish that Gorbachev’s example would shine as a beacon for more political leaders in the world today.”