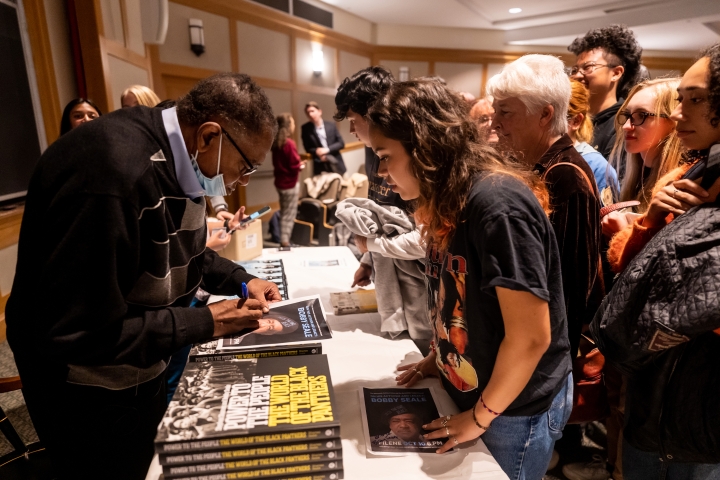 Bobby Seale, who cofounded the Black Panther Party in 1966 and has been a lifelong political activist, visited Dartmouth on Monday.

The visit by Seale, 85, included speaking to students in Associate Professor Julia Rabig and Lecturer of History Darryl Barthé’s “Dartmouth Black Lives” class in the morning, attending lunch with faculty, staff, and students at the Nelson A. Rockefeller Center for Public Policy, and speaking to a capacity crowd in Filene Auditorium Monday night in a Dartmouth Political Union talk. Students with the DPU played an integral role in planning the visit and hosting him on campus.

Here are a selection of questions posed by attendees at the Rockefeller Center lunch. Seale’s responses are lightly edited.

What was your founding political ideology for the Black Panther Party?

Getting out there and getting things done. I despise sitting around intellectualizing about what the struggle is supposed to be about. People ‘blah, blah, blah,’ and I’m ‘see you later, man.’ Let’s go out and get something going. Know what I mean? Do it.

So I picked up something from Hegel—dialectics, you know. Materialism. It’s a real-world equation. Quantitative increase meets quantitative decrease and causes a qualitative leap of change. It’s mathematics.

I didn’t run around talking about ‘we hate Black or white folks.’ That wasn’t the point. I discovered there was a whole lot of white folks out there standing up for our civil human rights.

How has political and community activism changed from your time organizing with the Black Panthers to today?

I like to say, ultimately, we live in an overdeveloped, high-tech, fast-paced, computerized, scientific, technological social order. So in that context, the fact that George Floyd is being killed, and they have technology not only to record it, but to send it around the world. And that, for the first time in American history, those demonstrations hit 40 million people in the streets … 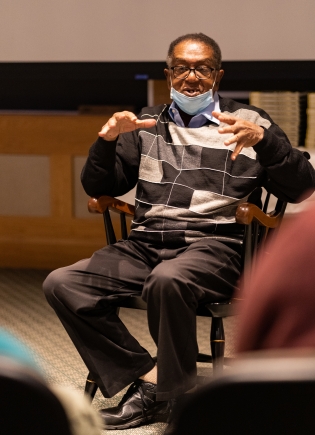 When I was out there, there was no technology, and for me to saturate a community, I had to get thousands of leaflets, and 100 people passing them out in all these voting precincts, you see what I’m getting at? It’s all right there now, but you still have to do it.

What advice do you have for students engaged in various sorts of political activities today?

Our democracy is at the edge here.

And now today, you as young folks in organizing, take that concept of coalition politics, across the lines. … Understand progressive politics—constitutional, democratic, social human rights. And when they start talking about socialism, remember, there’s nothing wrong with the concept of socialism, as long as there’s a democratic foundation. But if you take away the people’s power to vote to change things, we can’t have that. We’ve got to have that right to vote and change things.

We have to have those constitutional, democratic, civil, and human rights at the forefront politically and in all social justice work. Keep them. Don’t give it up, don’t let it go.

Seale’s visit was organized by the Dartmouth Political Union student group, with support from the Rockefeller Center, the Council on Student Organizations, The African and African American Studies department, and the history, English, and geography departments.