President Emeritus James Wright is celebrated as a big presence and a generous friend.

More than 700 mourners at Dartmouth and via livestream gathered Wednesday for the memorial service for James Wright, who died this month at 83, honoring him as a teacher, scholar, mentor, historian, U.S. Marine, veterans’ advocate, husband, father, friend, and the 16th president of Dartmouth.

Billed as a “celebration in remembrance,” the ceremony in Alumni Hall was standing-room only with an overflow room in the Hanover Inn ballroom and streaming online when the U.S. Marine Corps honor guard led the procession of celebrants, many in academic regalia. It was led by the two presidents who succeeded Wright, Jim Yong Kim and Philip J. Hanlon ’77, followed by Bruce Duthu ’80, chair of the Department of Native American and Indigenous Studies, a program that Wright helped establish, past and present trustees, faculty members, Marine Corps comrades, and friends from Wright’s life.

The Rev. Nancy Vogele ’85, college chaplain, delivered the invocation from the podium. She was flanked by an American flag, the Marine Corps flag, and the Dartmouth flag.

Jim cared and supported all of us. He devoted time and attention to relationships and dedicated his life in service to others ... and to Dartmouth.

Duthu offered a Native American prayer, reading from tributes sent by Native American alumni from around the country. Louise Erdrich ’76, one of the first women admitted to Dartmouth and the speaker at Wright’s last Dartmouth commencement as president, provided a reflection on the qualities of a good leader from an Ojibwe perspective, Duthu said.

“It is respectful to say that someone stands up for his or her people. It is one of the most important attributes in a person’s character. I would say that about Jim Wright and that his people included an extraordinarily generous range,” Erdrich, a Pulitzer Prize-winning author, wrote. “Native people, veterans, men and women, rich and poor, disabled, and those challenged by circumstance, as well as the superlative individuals of genius. I truly think this made him a great man.”

The Dartmouth president from 1998 to 2009, Wright joined the Dartmouth faculty in 1969, was a campus leader for decades, and always loved to interact with students, faculty, and staff. After he retired, Wright kept an office in Hanover, where he continued to write, until he retired from public life earlier this year as he underwent treatment for cancer. He died at his Hanover home on Oct. 10.

President Hanlon began the memorials with, “Jim cared and supported all of us,” noting that he would sometimes turn to Wright for advice in challenging moments. “He devoted time and attention to relationships and dedicated his life in service to others, to his family, to his country, to his military brothers and sisters, to his students—and to Dartmouth, whose special brand of education he loved and cherished.”

Former president Kim recalled that he and Wright came from humble beginnings, both growing up on the banks of the Mississippi River in small Midwestern towns, marveling that they went on to become the 16th and 17th Dartmouth presidents in the Wheelock succession.

Kim said he was awed when he first met Wright, standing 6-foot-4 with that powerful sonorous voice.

“I thought to myself, wow, President Wright is so thoughtful, well-spoken, so warm and inviting, and it seemed to me possessed of the actual voice of God. How can I possibly follow him?” Kim said.

Wright joined the Dartmouth faculty in the last year of John Sloan Dickey’s presidency, Kim said, recalling Dickey’s famous invocation that “the world’s troubles are your troubles, and there’s nothing wrong with the world that better human beings cannot fix.”

Tributes to Wright came from all parts of his life: Annette Gordon-Reed ’81, a former trustee, and also the winner of a Pulitzer Prize, credited Wright with launching her career as a historian; Richard Auman, a former mayor of Galena, Ill., who grew up with Wright, joined the Marines with him, and they resolved to go to college together at Wisconsin State College and Institute of Technology; Colin Calloway, a professor of history and Native American Studies, who honored Wright for fighting for Native Americans at Dartmouth, and cornered Calloway into writing the Native American history of the College.

William Neukom ’64, former chair of the board of trustees, recalled the words Wright shared with each graduating class during his presidency. 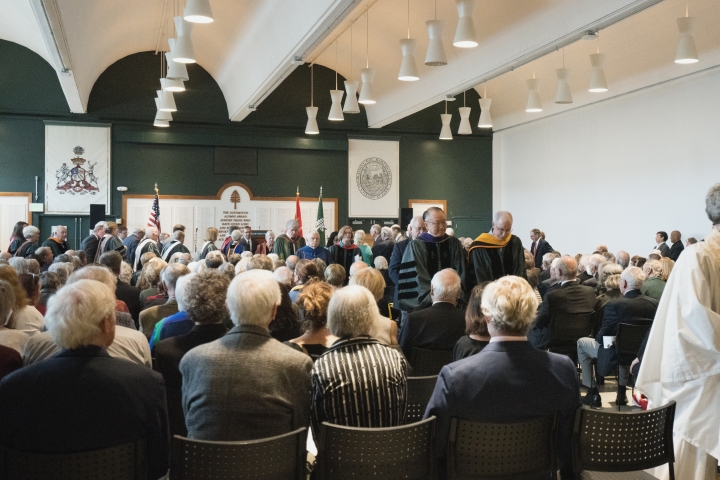 Wright’s children and grandchildren offered words of love and tribute, as did his wife, Susan DeBevoise Wright.

Wright’s two sons, joined on stage by their sister, Ann Wright, spoke of their father’s love of sports, the Boston teams and the Green Bay Packers. “Every time I sit and I watch a Packers game or a Red Sox game or a Celtics game, Dad’s there with me,” said Jim Wright, Tuck ’93.

Said son Michael Wright, “All parents want their children to succeed and effectively do better than themselves in life. I can stand here and state with unfiltered pride that I will never do better than my father. They say you can tell a lot about a person by the company he keeps. Looking at Susan, and out there all of you assembled here today, I have proof of what we already know. My father was a great man. I am incredibly lucky to have been my father’s son.”

His grandchildren also recounted the adjectives they had chosen to describe their grandfather on his 80th birthday.

“In one of our final conversations, about a week before his death, my grandfather gave me the wise advice that life is meant to be lived and not planned,” said Patrick Wright ’23. “I hope I can live my life in a way that would make him proud.”

Susan DeBevoise Wright, who played a prominent role on campus during her husband’s presidency, thanked all who came for their love and care.

“Thank you for coming together today to remember Jim. I will forever hold him in my heart. You and me, you and me together. I will never let him go,” she said, blowing a kiss skyward.

The only Marine to serve as Ivy League president, Wright was an instrumental force in advancing educational access to veterans across the country. He was shown full Marine Corps military honors at the service, which closed with Taps and the presentation to Susan Wright of the American flag by the Marine Corps Honor Guard.

Throughout his five decades at Dartmouth, Wright attended every military commissioning ceremony he could, over time giving the first salute to hundreds of newly commissioned officers.

At the end of his memorial service, two Marines stood at attention, then gave James Wright his final salute.

Also from the memorial service:

“Jim deeply appreciated the social, intellectual, and emotional lenses through which all of these people viewed aspects of Dartmouth reality. And, as Bill said in sharing those perspectives with us, he did make us better trustees. We did a better job holding Dartmouth in trust because of Jim.” 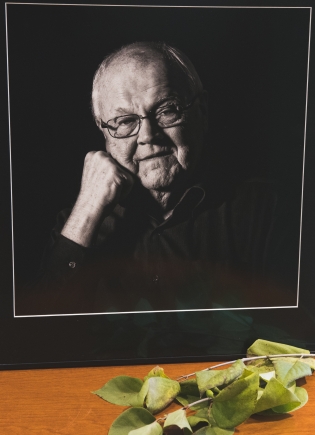 A portrait of President Emeritus James Wright, who died Oct. 10 at 83, at the memorial service on Wednesday. The lilac branches were snipped from a bush that Jim and Susan Wright had planted at the president’s house during his time as president. (Photo by Katie Lenhart)

“I loved his courses from the very beginning. They opened a world to me. I looked forward to his lectures, which were invariably clear, thought-provoking, and often delivered with a dry wit that I came to appreciate very much. I have to say, I was at first intimidated by the very tall and deep-voiced Professor Wright, with that voice that people have mentioned so much, but it was the twinkle-in-the-eye humor that revealed that he was in fact accessible and wanted to be approached by students.”

“He was always committed to his faculty, increased their numbers as well as their salaries. Moreover, from his very first years, he was committed to diversifying both the faculty and the student body. His style of leadership was not flashy, but quiet, deliberative, supportive and was seen at every level of the complexity that makes up Dartmouth.”

“The second memory also comes from that time, sitting in Jim’s office in one of our meetings, and he said to me, ‘Part of the problem here is that people do not understand Dartmouth’s Native American history. Someone has to write Dartmouth’s Native American history.’ Two American historians sitting in the room, only one of whom is president of a major Ivy league institution. (Now you may quibble about the details, Jim, but we both know what was going on there.) Jim never, ever told me what to do, but he was really good at showing you what you needed to do.”

“My proudest moment as a trustee was casting my vote to make Jim Wright president. … He did not shine the light in our eyes. He lit the way. Thank you, Jim.”

“We were a team. We were his team and he made us feel that, and in turn he made us want to perform our roles, our responsibilities at the highest possible level for him. … I remember how much fun it was to interact and to collaborate with him.”

Many hours after the mourners had departed, CNN anchor Jake Tapper ’91 closed his 9 p.m. show, CNN Tonight with Jake Tapper, with an emotional tribute to James Wright. As photos from Wright’s years at Dartmouth cycled onscreen, Tapper, who had been scheduled to speak at the memorial but missed the event due to weather delays, said of his beloved history professor: “He was an intellect and never an elitist. He was a friend to us all. He taught me history. He taught me reverence for service. He taught me empathy for veterans and their wounds. He taught me friendship and he taught me fellowship and I will miss him deeply.” 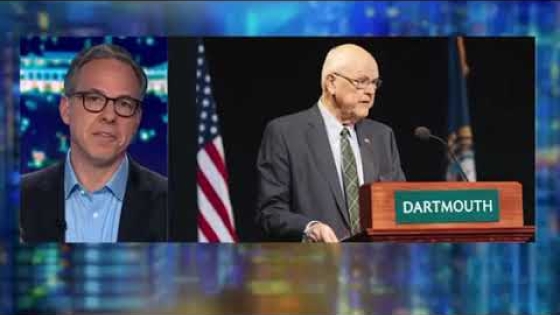