The data journalist joins the Dartmouth/UNH event from New York between CNN segments. 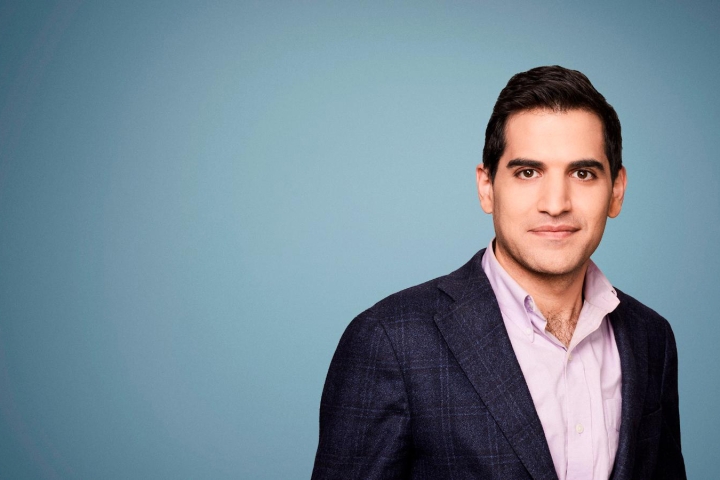 The one prediction that CNN senior data reporter Harry Enten ’11 is not hedging on is that the sharp partisan divide in the U.S. will likely drive record turnout in next month’s midterm elections.

“One thing I am quite confident on at this point is that we are going to be near or exceeding record turnout for midterms 2022. We can see that in the primary vote data, which was the highest it’s ever been, at least as I’ve ever seen it. And we see it in our own CNN polling where enthusiasm’s quite high,” Enten said Monday evening, speaking from his couch in New York City in a hybrid Zoom webinar co-hosted by the Nelson A. Rockefeller Center for Public Policy and the University of New Hampshire’s Carsey School of Public Policy.

Government professor Dean Lacy, who has known the CNN journalist since Enten wandered into his office as a high school senior to talk politics, hosted the live Dartmouth portion of the event with an audience consisting primarily of his “Gov 3” class. Lacy asked at the top for Enten’s midterm predictions.

“Let’s start with the House, because the picture there I think is a little more certain. I do believe Republicans are going to gain control, it’s not 100%, but at this particular point, I think anywhere between Republicans gaining—net gaining—somewhere between 15 and 30 seats is probably the best bet. They only need a net gain of 5 to take control,” Enten said.

A month ago, aggregate polling numbers still had Republicans gaining seats in the House, but in smaller numbers, he said, citing President Joe Biden’s slumping approval ratings, at the same time that inflation and the economy have risen on the list of voters’ biggest concerns, as possible reasons.

“In the Senate, that’s a much more interesting ballgame,” Enten said. “Look, the Senate is probably going to come down to four or five seats,” Arizona, Pennsylvania, Georgia, Nevada, and one other tossup race. Republicans seem to be gaining steam in most of those races, he said.

“But if the election were held today, I think it would be a tossup, or maybe a slight tilt toward the Democrats.”

Enten cautioned that the massive volume of polling data available today varies widely in quality from race to race and includes surveys of broader generic preferences such as Republican vs. Democrat, presidential approval ratings, and voters’ ranking of their most important issues.

For example, a year ago COVID-19 was ranked first among potential voters as the most important issue, and now concern about the virus polls in the low single digits, Enten said. The pandemic has been supplanted in rapid succession by issues such as Russia’s invasion of Ukraine, abortion rights, and most recently, inflation and the economy.

“We might think we have it figured out, but years can get very interesting very fast,” he said.

Still, true to the “Whiz Kid” moniker bestowed on him by FiveThirtyEight founder and his former boss Nate Silver, Enten spoke on and answered questions about half a dozen current Senate races, a number of House races, governors’ races, and touched on polling hits and misses in presidential, midterm, state, and ballot measure elections going all the way back to 2000, when Enten was in elementary school.

Before the webinar began, Lacy spoke about Enten’s student days, pointing out his regular seat in the Rocky 003 auditorium where he sat during his own “Gov 3” classes. When Enten graduated, aggregated data journalism didn’t exist, but he took other jobs until Silver hired him for the new FiveThirtyEight website.

“The job didn’t happen right there when he graduated. He didn’t know what he was going to do when he graduated as a senior, but stuck to it, and took it from FiveThirtyEight, to CNN, to fame,” Lacy said.

Enten answered questions from the Dartmouth and UNH live audiences and from those watching online through the webinar hosted by the Carsey school.

He said he regretted not being able to make it to Hanover for the event, but a series of CNN segments earlier that day and a 7 a.m. live segment on Tuesday morning made a Dartmouth visit impossible.