Damiano Benvegnù wins funding for a virtual window into the Shaker Forest landscape. 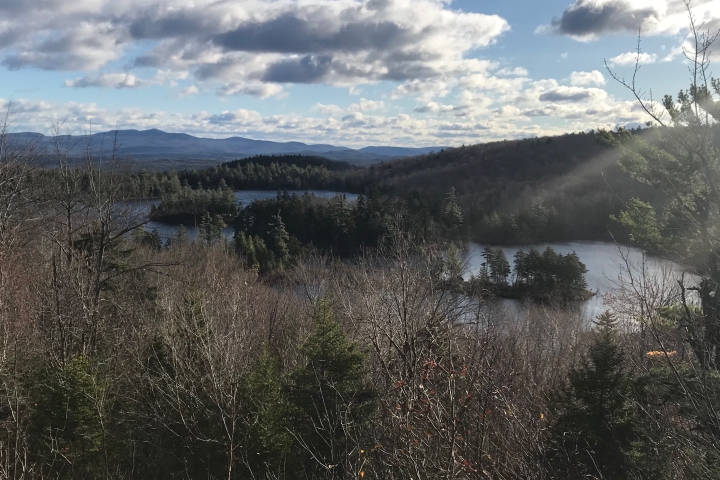 If you’re driving south on Route 4A, looking for a hike to take in the late fall foliage, go past the Enfield (N.H.) Shaker Museum on the left while keeping an eye out for the Smith Pond Shaker Forest on the right. The road acts as a boundary of sorts, separating an early Shaker settlement from Smith Pond’s 995 acres of forest and wetlands—civilization and nature, divided by a strip of pavement.

Except Damiano Benvegnù, a senior lecturer of Italian, doesn’t see things that way. An environmental humanist, Benvegnù prefers to focus on connections, not divisions, among culture, history, and landscape.

In late August, Benvegnù got a boost in helping illustrate those connections for the general public. The National Endowment for the Humanities awarded Benvegnù a $100,000 Digital Projects for the Public grant to develop an augmented reality prototype app that will give visitors to Smith Pond Shaker Forest virtual windows into the area’s human and ecological exchanges. The project is titled Entangled Ecologies: Digital Storytelling in the Shaker Forest Landscape.

“We want to give them the possibility to really connect, not just with the beautiful scenery, but with the deep roots that this environment has with the different human communities and how this place is really the product of conflict, harmony, care, and exploitation,” Benvegnù said of the forest, which is about 12 miles south of Hanover.

It’s the first grant of this kind for Dartmouth. 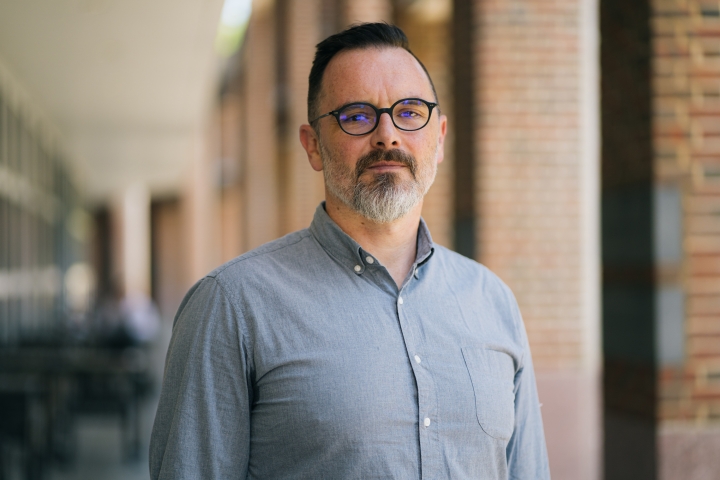 Damiano Benvegnù, a senior lecturer of Italian, was awarded a $100,000 Digital Projects for the Public grant from the National Endowment for the Humanities to help tell the story of the Shaker Forest landscape. (Photo by Julia Levine ’23)

Benvegnù is originally from the scenic, mountainous Dolomite region of Italy, though he moved around quite a bit, first due to his father’s work, and then as he pursued graduate degrees and teaching positions. When Benvegnù came to Dartmouth in 2016, he began exploring locally, a habit he’d picked up from all his moves.

“I need to know where I put my feet,” Benvegnù said.

While teaching at Dartmouth, Benvegnù was looking for a nearby natural area with signs of human interaction to take his students on a field trip. The Upper Valley Land Trust recommended Smith Pond Shaker Forest, with its three historic dams and canal system built by early Shakers, as well as signs of trails used by Indigenous peoples.

The Shakers were part of a small Protestant denomination who believed in equality of the sexes, community of goods, pacifism, and celibacy, and were at their peak in Enfield in the mid-19th century, according to the Enfield Shaker Museum.

One of the ways to do this was through technology.

The field trip was a rainy, full-body experience, but, according to Benvegnù, “the students loved it.” At first, many of them considered the area a pristine example of New England wilderness, though Benvegnù pointed out the “environmental memory” left by the people who had used the forest in the past. That got Benvegnù thinking about how people might experience the history and potential futures of Smith Pond Shaker Forest while standing on the present-day ground.

“One of the ways to do this was through technology,” he said.

The augmented reality, or AR, app that Benvegnù is envisioning would live on users’ smart phones, similar to the popular game Pokémon Go. When people visit the forest, they could scan leaf-shaped QR codes located in designated areas to trigger audio and visual experiences, such as a view of one of the Shaker dams as it looked when it was built, but overlaid onto the present-day world.

There are challenges using apps in remote locations, connectivity being a big one, but Benvegnù believes it is important for visitors to use the app while they’re physically on location—to smell the forest air, to hear the sounds, even to feel their own sweat—to help foster connections between conditions in the present and stories from the past.

At the same time, Benvegnù says there are two myths to contend with—the “return to nature” myth, as if we can simply go back to a place where technology does not exist, and the “technology will save us” myth, as if science alone will fix any environmental issue, regardless of the history of human/nonhuman entanglements and the larger cultural frame of humanity as a species.

“We want to try to depart from both and see how we can actually use technology in a third way, in a different way,” he said.

Benvegnù is quick to credit his advisory board and partners who will be helping to bring this AR prototype app to life. Two of those people are Denise and Paul Pouliot, the Sag8moskwa and Sag8mo (head female and male speakers) for the Cowasuck Band of the Pennacook-Abenaki People. They’re involved in other AR projects focused on Indigenous history around New Hampshire, but this one allows them to shine some light on the information sharing between their people and early Shaker settlers, such as basket making, homeopathic remedies and agricultural practices.

In these projects, “we’re dealing with climate change, ecology, sustainability, and stewardship of the land,” Paul Pouliot said. “As Indigenous people, we represent probably less than two percent the total population in New Hampshire. But our stewardship practices are coming more in focus.”

Though the Shakers and Indigenous people cooperated, the dams the Shakers constructed remain a sore spot.

“In our oral traditions we talk about a great frog that stopped the flow of water and sucked all the water up, so we could use narrations from storytelling that would describe our feelings about dams,” he said.

Denise Pouliot suggested the dams could be removed to restore the original ecological balance. “It’s not something of the past because the dam is still living today,” she said.

Pouliot talks about the importance of including Indigenous people in the history of the region, which school textbooks often skip over.

“We’re not there to change history, we’re there to add to it,” she said. “There are more perspectives than just a single voice.” 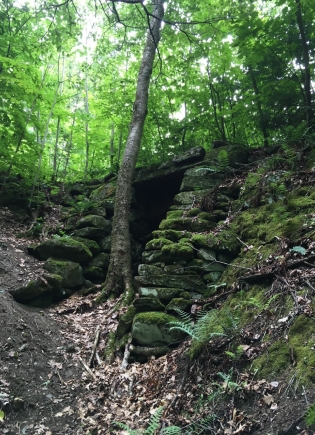 The Lower Shaker Dam in the Shaker Forest. (Photo by Damiano Benvegnù)

The Pouliots place value on educational experiences like the planned Smith Pond Shaker Forest AR app, where people are physically present to touch and see things. These lessons about respecting the environment stick, they feel, because they’re leaning them while in the forest itself.

“I also hope that it will make people more curious about the Indigenous people that lived here and what we’re doing today,” Denise Pouliot said. “I hope that people walk away realizing, sure, we are a thing of the past, but we’re a thing of today as well.”

“We still carry our traditions,” she added. “They may not be as intact as they were prior to contact, but we saved as much as we could, and we’re proud of that. And part of the loss is part of our story and part of the history as well, and that should be shared.”

“We were thrilled to think we could partner on something like that,” she said. “It’s new, it’s innovative, it’s creative, and it’s a way of drawing together a lot of complex ideas and facts and making them live for people in a different way.”

The UVLT acquired the land about seven years ago, but McIntyre remembers the land being a preservation priority for the nonprofit group for more than three decades. “It’s a jewel,” she said, pointing to the wetlands and the 65-acre Smith Pond, with its protected shoreline because no road leads to it.

Another part of the land’s value comes from its location. Smith Pond Shaker Forest sits between two state wildlife management areas, and the combined acreage of the three connected properties makes up more than 5,000 acres of “really great habitat,” she said.

The UVLT will help with the project in two main ways. One, the group will help identify sites for placing the leaf-shaped QR codes for visitors to scan with their phones. And two, they’ll be collecting oral histories from the 1950s to 1970s that tell stories of Upper Valley residents enjoying family picnics, hunting, or exploring that land. The Shaker history may be better known, but McIntyre wants a broader representation of who used the land, and for what.

As an example, she recounts a story of Plainfield, N.H., high school classmates who used to drag a canoe up the trail for night paddles on Smith Pond.

“That’s quite a long hike!” McIntyre said, adding: “All the different things that have happened on that land have led to what it is today, one way or another.”

McIntyre thinks the AR technology could change the way that land trust and land managers approach their goals. “And for us to be able to be at the front of that, working with somebody like Damiano, is just really exciting,” she said.

Benvegnù expects the prototype app, which he is developing in collaboration with John Bell, the director of the Data Experiences and Visualizations Studio, and Dartmouth students, to be completed by the summer of 2024. If testing goes well, and they can secure a completion grant, the public should be able to download the app and visit the 10 to 12 clusters of scannable locations in 2026.

“This model can be used in a lot of other places, and it really can spark a new way to engage with the ecological knowledge,” he said.

The project owes a small debt to the COVID-19 pandemic. Without it, Benvegnù might have spent more time conducting research abroad. A travel ‘boundary’ of sorts led him to unravel divisions between nature and technology, the past and the present, right here in his own backyard.

“And it makes sense, as a Dartmouth scholar, for me to get to know a little bit better and contribute to the larger community here,” he said.

Written by
Matt Golec
Share this
FacebookTwitterEmail
In the News