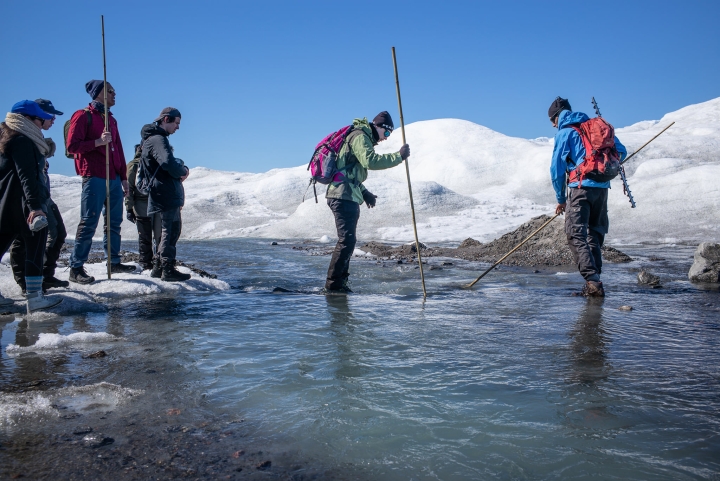 Students in the Joint Science Education Project take glaciology measurements in Greenland in 2021 in research with the Institute of Arctic Studies at Dartmouth. (Photo by Lars Demant-Poort)
11/03/2022
More Reading

At the Front Line of Climate Change

The Institute of Arctic Studies will continue to train the next generation of climate change scientists, thanks to a new $1.3 million grant from the National Science Foundation supporting the institute’s Joint Science Education Project through 2026.

In fact, nine students who participated in the JSEP program in high school are now at Dartmouth, thanks to their interest in climate change and the work of the IAS, which is part of the John Sloan Dickey Center for International Understanding. Two other JSEP students also attended Dartmouth and already graduated.

“This is wonderful news,” says IAS Director Melody Brown Burkins. “JSEP is the institute’s longest running grant program, directly connecting the next generation of scholars to the pressing challenges and realities facing diverse peoples and regions of the Arctic, from climate change adaptation to biodiversity loss.”

An international collaboration among the United States, Greenland, and Denmark, JSEP was founded during the International Polar Year in 2007. High school and university students and teachers from the three countries work together during a 3-week field course in Greenland to study polar environments and the human dimensions of rapid Arctic change. In addition to Dartmouth’s NSF grant, funding is provided by the government of Greenland.

Due to the COVID-19 pandemic, travel to Greenland from the U.S. was curtailed over the past two years. But Lauren Culler, research assistant professor of environmental studies, IAS senior fellow for climate and environment, and leader of the JSEP project, says teachers found creative ways to develop Zoom-based classes simulating the kinds of field experiments Greenlanders and Danes were conducting on the world’s largest island, where ice is melting at an alarming rate.

“For example, our online students created their own ice sheets and sea ice, and they would mimic different properties of ice in Greenland by freezing sediment into some of the ice cubes, basically creating their own personal Arctic in their freezers,” says Culler. “To help them understand how melting rates are influenced by different factors, we sent them little heat lamps, like you might put on a reptile’s cage, so they could put their clean ice and their dirty ice under the lamp and calculate the rate at which it melts.”

We are so excited to see so many incredibly talented young people from all over the world paying attention to a changing climate.

On top of the nine recent JSEP alumni now at Dartmouth, another eight visited the campus this summer. Alana Macken ’23, from Santa Rosa, Calif., a city twice devastated by wildfires, attended the program in Greenland in 2018, and saw first-hand how ice sheets were receding due to a warming climate.

“That summer with JSEP was a really important turning point because I had a lot of residual emotions about fires in California, and I think that meeting Greenlanders my own age who were talking about—and learning about—real tangible things happening right under their feet created this sense of community that I’d never felt before until then.”

Macken says her work with JSEP motivated her to apply to Dartmouth, where she majors in physics and earth sciences. She’s now writing a thesis mapping fires in British Columbia and Alaska.

Also majoring in earth sciences on campus is Ivan Tochimani-Hernandez ’24, from Denver, Colo., who participated in JSEP in 2020.

“My focus is geomorphology and paraglacial environments, looking at how landscape shifts due to climate change and human interactions,” he says. “My JSEP group studied food systems, and that also inspired me to look into how agriculture can be expanded—or not—in Arctic regions.”

For Noor Boukari ’26, whose parents immigrated to the United States from Algeria in the 1980s, when high temperatures were adversely affecting some rivers, JSEP opened a window on environmental damage in a much colder region.

The best thing about JSEP, says Boukari, was learning climate science “from people who are actually doing it, every day. The second aspect is the deep international understanding you get directly from the people of Greenland and Denmark. It’s a unique experience.”

Graduate students are integral to JSEP’s success. From Thayer School of Engineering, Nigerian-born Ayobami Ogunmolasuyi became an online mentor and teacher in 2020, following his graduation from the University of Maryland.

As a PhD candidate and NSF fellow, Ogunmolasuyi is studying how sulfuric acid from volcanic emissions affects the properties of ice. For JSEP, he helped develop and deliver online lessons he wishes he’d had when he was in high school.

“JSEP is an outstanding introductory program because even in online form, it’s hands-on,” says Ogunmolasuyi. “One of the best things that happened during the last round was that some experiments failed. So the students learned that, OK, in science, some things work, some things don’t, and if they don’t, you just find a different way to tackle the problem.”

And the problem of climate change is accelerating at a pace even Culler did not foresee, when, as a graduate student, she joined the program she now directs.

“The Arctic is warming at four times the rate of the rest of the globe,” she says. “Seven years ago, when we started JSEP, we would’ve said that the Arctic was warming twice as fast. We are so excited to see so many incredibly talented young people from all over the world paying attention to a changing climate, and with this latest grant, we look forward to keeping up that momentum.”