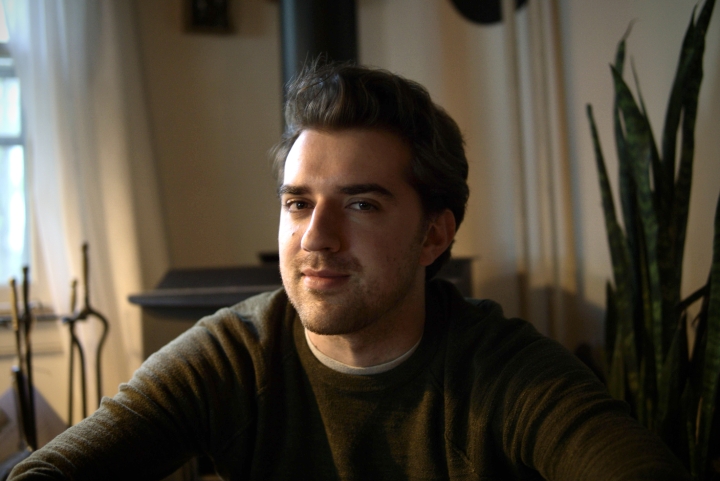 A work by a New York City-based playwright about two sisters, one of whom is programmed with artificial intelligence, has won the 2022 Neukom Institute Literary Arts Award for Playwriting.

“Matthew Libby’s Sisters is a terrific piece of dramatic work that makes us think about the emotional dimensions of the intersection of lives and the digital,” says Dan Rockmore, director of the Neukom Institute for Computational Science at Dartmouth and a professor of math and computer science.

Libby is an actor and playwright based in Brooklyn, New York, and a 2022-2023 Dramatists Guild Foundation Fellow.

Six additional plays were selected as finalists: The Many Wondrous Realities of Jasmine Starr-Kidd by Stephen Brown, omniHappy by Alex Dremann, The Bergerac Simulation by Mora V. Harris, Singularity by Minh-Anh Day, Of Solitude by Amanda Keating, and Underdrown by Derek Lee McPhatter.

It’s a play about the finiteness of human life when put up against the infinity of the technology that we create and shape.

Established in 2018, the annual Neukom playwriting award considers plays and other full-length works for the theater that address the question, “What does it mean to be a human in a computerized world?” The award is a partnership between the Neukom Institute, the Department of Theater, and Northern Stage, based in White River Junction, Vermont. This year’s winner comes from a shortlist of seven plays selected from 141 submissions.

Sisters chronicles the life of Matilda and her AI sister Greta. The story explores what lies at the core of family dynamics, artificial intelligence, the finiteness of existence, and, ultimately, humanity. Libby’s seemingly modest portrayal of this extraordinary pair of sisters through fragments of their dialogues creates tender, ambivalent, yet explosive chemistry, challenging the audience to ponder every single exchange in the sisters’ lives.

“My work has long been interested in the question of what’s innately human in an increasingly technological world, so I’m thrilled and honored to have found collaborators at Neukom and Northern Stage who are driven by the same question,” Libby says. “It’s a play about the finiteness of human life when put up against the infinity of the technology that we create and shape.” Sisters is the type of writing that Libby has always wanted to take on: it is “small, but huge—intimate, but epic,” he says.

Libby’s award includes a $5,000 cash prize and one weeklong workshop at Northern Stage during the 2022-2023 season. The workshop, directed by Aileen Wen McGroddy, resident director of the BOLD Theater Women’s Leadership Circle at Northern Stage, will culminate in two public readings of the play by the full cast. The first will take place on the Dartmouth campus at 7:30 p.m. on Thursday, Jan. 12, in Filene Auditorium located in Moore Hall. Northern Stage will host the second reading at 7:30 p.m. on Friday, Jan. 13, at the Byrne Theatre in the Barrette Center for the Arts in White River Junction.

“The topic of this play means a lot to me personally, even more so over the past couple years,” says Libby, who studied cognitive science and creative writing at Stanford and received an MFA in dramatic writing from New York University’s Tisch School of the Arts, where he was awarded the Chair’s Award for Distinguished Achievement. “To have an opportunity that allows me to develop it, and to continue figuring out how its idiosyncratic form translates into 3D space, is beyond invaluable. Gratitude doesn’t even begin to describe it.”

“We are thrilled to support the development of this beautiful and daring play that asks in both form and content what it means to be human,” says BOLD associate artistic director Sarah Wansley. “So many stories about the future of AI are centered on male characters. Matthew’s choice to place two women at the heart of this investigation and explore their relationship over decades is as fresh as it is theatrically compelling.”

“We are delighted to see the explosion of interest in the Neukom award,” says Rockmore, creator of the award program. “It is so exciting to see the thoughtful, creative work that is being sent in response to the call and gratifying to be able to support this work at the nexus of the arts, humanities, and computation.”