“It Changed My Life”

As a first-year, Edie Stuart ’11 wanted to explore everything Dartmouth had to offer, but she didn’t know where that would lead her.

Then she took “Educational Issues in Contemporary Society,” with Professor Emeritus Andrew Garrod.

“It changed my life,” she says. The London-born daughter of American expatriates had never thought about the inequities in American schools. “We read [education equity advocate] Jonathan Kozol. I was completely blown away.” 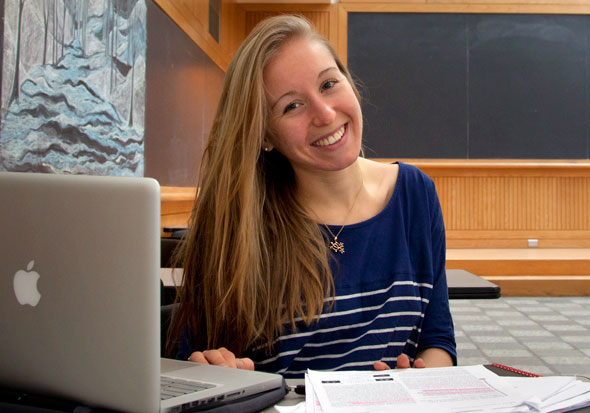 A course on contemporary educational issues inspired Edie Stuart ’11 to gain firsthand experience with students learning in challenging circumstances and pointed her toward a career in educational policy. (photo by Joseph Mehling ’69)

Stuart began mentoring a troubled teen from Windsor, Vt.; taught in the Marshall Islands through an education department program; and worked for SEAD (Summer Enrichment at Dartmouth), which brings students from under-resourced high schools to Hanover for three consecutive summers. Unlike many college-access programs, SEAD selects students who have not yet consistently succeeded academically, but who have potential to go to college. “We talk a lot about kids’ ‘deltas,’ their ability to change,” says Stuart.

The ability to change—to be open to new interests and to follow them with passion—is fundamental to the liberal arts experience. Stuart is now heading for a career in education policy. “So many problems in education have structural roots. I would love to be involved in solving them.”

BY THE NUMBERS: Summer Enrichment at Dartmouth (SEAD)• 2,800 undergraduates have volunteered with SEAD since 2001 • 48 Dartmouth students have served as SEAD interns in partner high schools 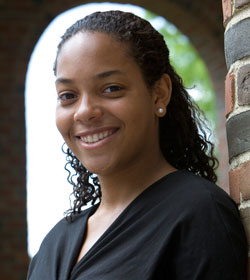 Amanda Brown ’07 , motivated by the memory of a classmate’s advocacy for others, now follows a path of public service herself. (photo by Joseph Mehling ’69)

Early in her Dartmouth career, Amanda Brown ’07 had a plan. “I’d go to law school, get married, and be a lawyer.” Then her best friend, Meleia Willis-Starbuck ’07, was killed in Berkeley, Calif., where she was volunteering at a women’s shelter. “Meleia was such an advocate for people. I was shy, and she had always encouraged me to find my voice.”

Devastated, and spurred by thoughts of what “Meleia wanted me to do,” Brown obtained funding from Dartmouth’s Rockefeller Center and went to Washington, D.C., as an intern for Barack Obama, then a newly elected junior senator from Illinois.

“I sorted mail and answered phones: nothing glamorous. But it was great to learn how our government works,” she says.

Back in Hanover, she took part in the Rockefeller Leadership Fellows program. “It opened my eyes to the idea that I could actually pursue public service, because so many others have done it.”

Dartmouth’s smaller scale made a difference, too. “You’re forced to establish a community. That has translated for me into commitment to country.”

After graduation, Brown attended a Chicago fundraiser for Senator Obama’s presidential campaign. “He pulled me aside and said, ‘I think you should work for me.’ ”

Sixteen months and seven states later, she barely caught her plane to D.C. to join the president-elect’s transition team. She’s worked for the administration ever since, first in the White House political affairs department, and currently in the Department of Energy. Plans for law school are still on hold—Brown has deferred acceptance three times—as she waits for the right moment to continue her studies.

“Dartmouth helped me learn that it’s not necessary to always know what’s next. I’m pursuing what I care about.”

Like Brown, Mike Lewis ’11 entered Dartmouth with a plan: to play squash at the highest level. “I expected to be challenged, I expected to meet interesting people,” he recalls, “but I had no idea that I would be able to travel and study abroad and meet professors who would really want to make a firsthand impact on my life.” Dartmouth, he says, has “opened my eyes to the world around me and given me the tools that I really believe will allow me to make a difference in the world.”
Image 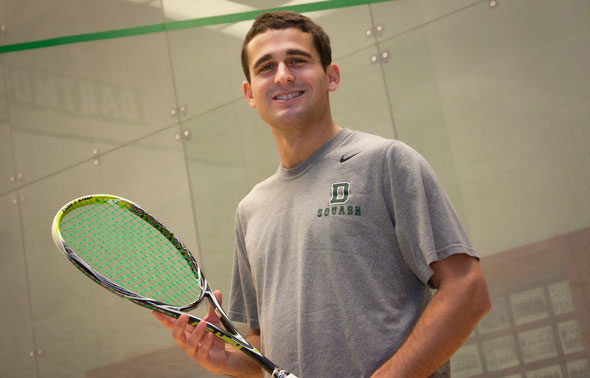 Dartmouth athletics and academics combined to reveal a world of possibilities for Mike Lewis ’11. (photo by Joseph Mehling ’69)

Before Lewis arrived on campus, Dartmouth’s then-assistant squash coach, Hansi Wiens (who became head coach in 2009), invited him to compete in New Zealand with the team. “That experience started me thinking, ‘How else can I use school to travel?’ ”

Dartmouth helped him find an internship with NBC-Universal for the 2008 Olympics in Beijing. With the Tucker Foundation, he went to the Dominican Republic on an Alternative Spring Break service project. Curious about Europe, he found a study abroad program in Florence, Italy, whose credits could transfer back to Dartmouth. During an off-term internship in Zurich, Switzerland, he traveled “with my backpack and my squash racquet,” playing squash in the Czech Republic, Austria, and Romania.

The government major and environmental studies minor found other ways to travel—intellectually. “My friends joke that I’ve taken classes in every department.” Exposure to a range of disciplinary lenses, he says, has “given me a diverse set of approaches to problems.”

Post-graduation, Lewis plans to work for Bain Capital Ventures. “In venture capital, every company, every idea, requires a different set of skills. I love that there’s nothing concrete about it.” He expects his job will require all the critical thinking skills he has developed at Dartmouth.

BY THE NUMBERS: Study abroad• 59 percent of Dartmouth undergraduates study abroad, the most of any Ivy League school and sixth among all U.S. doctorate-granting institutions. (Data from the Institute of International Education’s 2010 “Open Doors” report.)

“Exploring doesn’t stop when you leave Dartmouth,” he says. “If anything, you learn how you can do it for the rest of your life.” 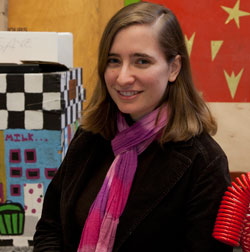 For Sarah Laeuchli ’11, the course “Directing 1” transformed theater from an interest to a passion. (photo by Joseph Mehling ’69)

“Before Dartmouth, I was interested in theater,” says Sarah Laeuchli ’11. “But I didn’t have a passion.” Taking the “Directing I” course with Professor Jamie Horton changed that.

“It made me think of theater as an all-encompassing experience,” she says. “It’s a story, and you’re touching it and feeling it and hearing it. Theater stopped just being fun and started being something I had to do.”

Laeuchli has been involved in productions every term since. Last winter the College funded her travel to Burkina Faso, West Africa, to collect folk stories; she’s turning those into a two-act play. “At Dartmouth, if you want to do something, you can. When you have an idea, professors say, ‘You should do that.’ That’s more rare than people here realize.”

Laeuchli hopes one day to start her own theater company to develop original work. Next year she will be in Budapest, interning with the National Theater in Hungary, a connection she made through another Dartmouth professor, theater department Chair Peter Hackett ’75.

BY THE NUMBERS: Theater• Over 500 positions in Department of Theater productions on and backstage are filled by undergraduates each year • Nearly 400 of these are in student-directed and designed productions

Catalyst for a career

Bridget Alex ’08 understands the impact that Dartmouth’s close faculty-student connections can have. “At Dartmouth, often all it takes to get something started is sending an enthusiastic email to a professor,” she says, circumstances she now knows to be remarkable. There are many places, she notes wryly, that might not have been as receptive to her undergraduate zeal.
Image 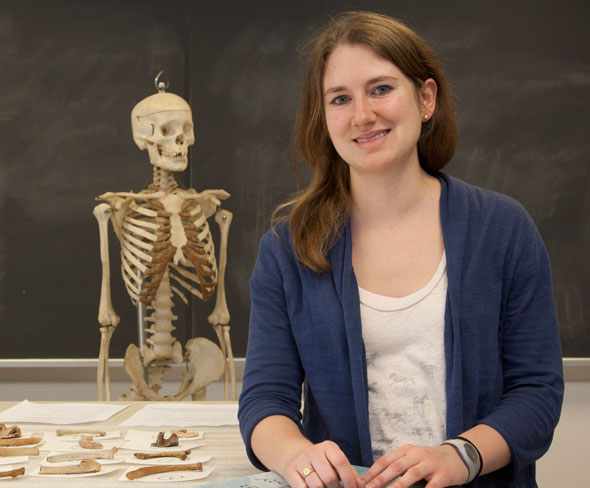 Bridget Alex ’08 turned to her professors for guidance and now hopes to follow in their footsteps. (photo by Joseph Mehling ’69)

Her enthusiasms caused her to change majors “five or six times,” finally choosing a double major in anthropology and chemistry modified with earth science. “I learned that all my interests really do combine.”

During a foreign study program in Prague, Czech Republic, Alex saw a newspaper article about using nuclear chemistry to analyze artifacts. “I wanted to do that—to apply chemistry to ancient materials and interpret them as an anthropologist.” Of course, she emailed her professors back at Dartmouth. “I spent the next summer working at the University of Missouri Research Reactor analyzing pottery, doing what first attracted me to the field.”

The Women in Science Project (WISP) gave Alex role models. “I edited and wrote articles for the WISP newsletter, highlighting achievements of alumnae scientists. I was inspired by their research. I wanted to put new information into the world, like them.”

Alex is a now a PhD student in the archaeology and human evolutionary biology programs at Harvard. “I can imagine continuing this my whole life. I’m so enthused to share it at any level—hopefully as a professor at a liberal arts school in the woods.”

BY THE NUMBERS: Women in Science Project (WISP) • 3,344 Dartmouth alumnae connected with WISP as undergraduates since 1990 • 1,494 students have been WISP interns