Leadership and Service: ROTC at Dartmouth

The out-of-classroom experience at Dartmouth offers a range of service and leadership opportunities to undergraduates. Among the many options is the U.S. Army Reserve Officer Training Corps (ROTC) program. Army Sergeant Major Levi Bennett operates the year-round Dartmouth program from his office in Leverone Field House.

Thirteen Dartmouth undergraduates currently participate in U.S. Army ROTC, which has run continuously on the Dartmouth campus since 1985. An average of one to two graduates commission as U.S. Army Second Lieutenants each year.

A similar number of Dartmouth graduates commission annually as U.S. Marines officers after participating in the Platoon Leaders Class, which is held during the summer at Quantico, Virginia.

Bennett says the program offers a direct career path for ambitious students who want to have an influence on military practice and policy. “Look at Dartmouth alumni who have been through the program, like Colonel Rich Outzen [Class of 1989].He’s a full senior officer working in the Pentagon. ROTC combined with an Ivy League education offers incredible opportunities.”

Sergeant Major Bennett is currently training with 13 undergraduates, including six who have been officially accepted as cadets. He says the students, as a group, set a training schedule that works around their studies. “Nothing should interfere with academics,” he says. “You can’t commission without a degree, and it’s important to me that they put up good grades.” Every year, an average of one or two graduating seniors are commissioned as U.S. Army 2nd lieutenants during a ceremony held during Commencement weekend.

President Kim says, “We are proud to offer ROTC at Dartmouth and we are honored that the men and women preparing for military service are part of our Dartmouth community. Members of the United States Armed Forces shoulder great responsibility and make a profound commitment to service for the benefit of us all. It is a privilege to provide these cadets with a world-class liberal arts education that will inform their careers as military leaders.”

To learn more about ROTC, Dartmouth Now talked with Cadet Nathan Swire ’11, a senior from Bethesda, Md., who will be commissioning this June.

Swire, who began ROTC during his sophomore year, is a government major with a concentration in international relations and a minor in Arabic. He recently learned that he has been accepted to the U.S. Army’s highly competitive military intelligence branch. Swire will begin his career some time in 2012 with three years as an infantry officer before moving to the intelligence branch for the remainder of his Army service. A writer for the student newspaper The Dartmouth for two years, Swire also participated in Dartmouth’s Foreign Study Program in Morocco.

What have you learned through your ROTC experience?

It’s been a time commitment but it’s absolutely worth it. I’ve learned tactics, leadership skills, and overall military strategy. I’m excited, and honored, to represent my country. I’ve always been interested in foreign policy, and I learned from veterans and others that joining the Army is a good start to a long-term career in that field.

The group has three hours of physical training per week and group lessons called Military Lab on Friday afternoon. Additionally, I take four hours of classroom instruction per week, though the younger cadets have fewer class hours. It’s all held at Dartmouth, mostly at the Leverone Field House. Twice a year we train with cadets at Norwich University [a private military academy in Northfield, Vt.].

Do you get many questions from fellow students?

We get a few, but not as much as we’d like, because many students aren’t aware that ROTC is an option. Most students have one of three reactions—they think it’s pretty cool, they want to learn more, or they ask why we would do this to ourselves. [Physical training starts at 7:15 a.m.] I haven’t had any antagonistic interactions. Dartmouth is a very welcoming campus.

Are there connections between what you’re learning in ROTC and your government classes?

Yes. I recently completed an independent study, along with my classmate Ahmad Nazeri ’11, about the military struggle against the Taliban in Afghanistan, and what the government’s current diplomatic options are. It ended up being a 55-page paper. [Nazeri, who is originally from Afghanistan, is majoring in history and Asian and Middle Eastern Studies. The students were advised by Brent Strathman, visiting professor of government.] In my future work, I will need to produce similarly detailed research, and the subject is obviously relevant to the sort of work I’ll likely be doing in a couple of years.

Dartmouth ROTC participant Colonel Rich Outzen ’89 (left) was at Dartmouth in April to attend a symposium in honor of Gene Garthwaite (right), a longtime Dartmouth history professor and the Jane and Raphael Bernstein Chair in Asian Studies. Outzen, who has served in a variety of attaché, security assistance, and liaison positions for the military, is the speaker for the 2011 Army ROTC Commissioning Ceremony at Dartmouth. (photo by Zach Ingbretsen ’12)

Dartmouth alumni and the military

Many Dartmouth ROTC graduates see active duty. Army Second Lieutenant Chris Koppel ’09 is currently stationed in Fort Hood, Texas. At the end of May, he is expecting to deploy with a brigade to Iraq, where he will be leading 20 soldiers in a mechanized infantry unit. Koppel says, ”It’s an honor and truly a rare privilege to deploy at the helm of a platoon.“

U.S. Marines First Lieutenant Jason Blydell ’08 recently returned from Afghanistan after serving seven months as a platoon commander in the Musa Qala district of Helmand Province. Blydell said his platoon’s goal was to build relationships with the locals and to identify members of the Taliban. “It’s very unconventional warfare,” said Blydell. “The only way to be successful is to be creative, and to learn a lot quickly. The Taliban walks down the street the same as a regular villager.” Blydell, who oversaw anywhere from 40 to 70 marines, was recently promoted to executive officer of the company. He says he will return to Afghanistan, likely in early 2012.

Following their deployments, many alumni draw on their experiences to contribute to the study and practice of the military. Iraq Veteran Nathaniel Fick ’99, author of the bestselling book One Bullet Away: The Making of a Marine Officer, is now CEO of the Center for a New American Security. Melissa Hammerle ’03, who served six years in Iraq, is studying at Harvard Business School and is the holder of a prestigious Truman National Security fellowship. LTC Scott Jeffress ’90, recipient of the Bronze Star Medal, is professor of military science at East Tennessee State University. And Michael Breen ’02, now a student at Yale Law School, delivered the Veterans Day Tribute at Yale University on Veterans Day in 2009.

Agroecology, Both a Science and a Movement 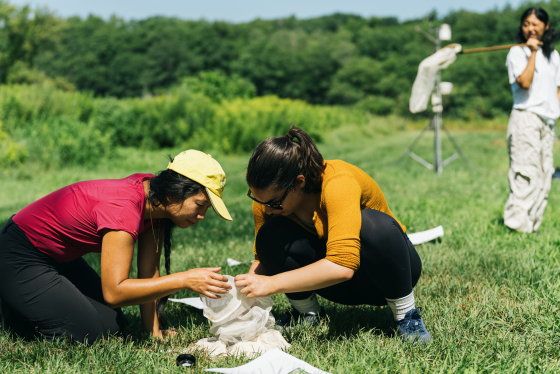