The Dartmouth men’s rugby club won the USA 7s Collegiate Rugby Championship before a national television audience on Sunday, June 5. The team went 6-0 in the weekend tournament and defeated longtime rival Army 32-10 in the final at PPL Park in Philadelphia, Pa. Muhammed Abdul-Shakoor ’10 capped the win with a graceful airborne somersault over the goal line to notch the last score. 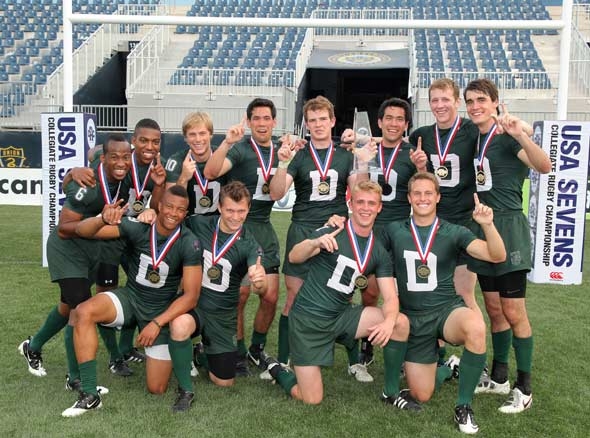 “Dartmouth has a great legacy in rugby,” says Coach Alexander Magleby ’00, explaining why his team was one of sixteen from across the country chosen to participate in the tournament. “We’ve won the Ivy League title for the last four years in a row and 11 of the last 14.”

The club’s legacy goes back even further. Founded in 1951, it is celebrating its 60th anniversary this year. In 1986 and 1988, the club was runner-up in the national collegiate championships. Those matches were the traditional fifteen player, 80-minute contests on a pitch 100 meters long by 70 meters wide. Rugby 7s uses the same sized pitch but with seven players a side playing for two seven-minute halves.

The wide-open spaces in this version of the game place a premium on aerobic fitness and mental discipline, Magleby notes. “Players will run the equivalent of five to seven 400-meter sprints in fourteen minutes” while tackling and being tackled. Preparing over the past month, he reports, the players lost an average of 12 to 15 pounds, shedding some muscle mass but gaining speed. With the added fitness comes the ability to avoid mental errors, Magleby continues. “In sevens, if all is equal, the winner is the team that doesn’t make mistakes. Dartmouth students are tough, smart, and poised.”

The club’s march to the final went through defending champion Utah (17-12), Notre Dame (24-19), and Boston College (36-0) on Saturday, June 4. The next day, the club defeated Premier League rival Penn State (12-7) and Central Washington (24-12) before facing Army. As predicted, the team was poised. Their high-pressure offense forced mistakes by the Black Knights and the Dartmouth club, led by captain Paul Jarvis ’12 and twins Nick Downer ’11 and Chris Downer ’11, capitalized and put the game away quickly.

“We knew that to win, we had to control the ball as long as possible, and put the pressure on them when they had it,” Nick Downer says. “It was a great win. We hadn’t beaten Army in more than ten years, and to beat them on that stage was really something special.”

Among those watching on television were President Jim Yong Kim and David Spalding ’76, chief of staff.  “The team represented Dartmouth at its finest,” President Kim said. “Their caliber of play was outstanding, and it was gratifying to hear the announcers highlight their academic accomplishments, too.”

Magleby is similarly effusive about his players, particularly the Downers, who will graduate Sunday, June 12. “Our philosophy is, always leave the team better than you found it. Nick and Chris came to the team as freshman, and for four years they’ve made it better. This win is a huge credit to them.”