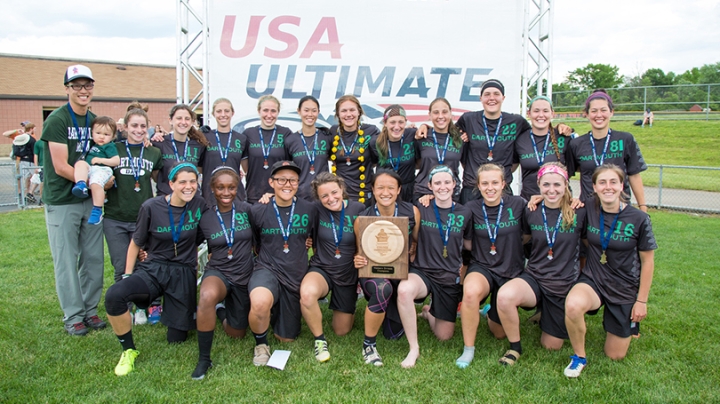 The Dartmouth women’s ultimate team won their first ever USA Ultimate college championship by defeating the University of Texas 15-9 in the final game in Franklyn, Ohio. (Photo by Paul Rutherford/UltiPhotos)
5/31/2017
Body

In the final game of the USA Ultimate tournament in Franklyn, Ohio, broadcast live on cable channel ESPNU, Dartmouth’s Princess Layout team outscored the University of Texas’ Melee 15-9. Led by Angela Zhu ’17, Dartmouth won four straight games in the finals to take top honors in the Memorial Day weekend tournament. Before the championships, Zhu was awarded the USA Ultimate Callahan Award, given to the country’s best player.

“It was a team goal to win the nationals,” says Julianna Werffeli ’18, co-captain with Zhu and Sarah Colon ’17. “But there are always a lot of things out of your control, so it was really cool to have it all line up and to be able to get the job done.”

Dartmouth women’s ultimate player Angela Zhu ’17 is hoisted by her teammates after she won the USA Ultimate Callahan Award, given to the country’s best player, before the finals on May 28. (Photo by Paul Rutherford/UltiPhotos)

The Dartmouth men’s ultimate team, which practices with the women’s team, advanced to the Division III nationals in Lexington, Ky., the previous weekend, dropping a quarterfinal match to the University of Richmond. 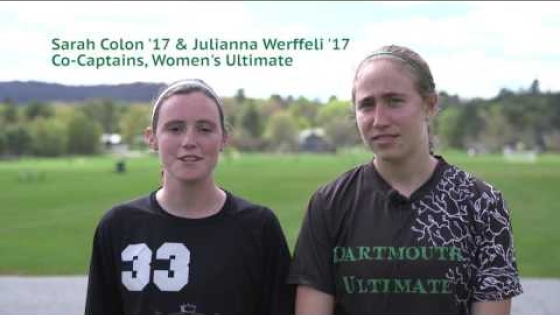 Other club highlights for the season include the Dartmouth coed club fencing team advancing to the USACFC College Fencing National Championship in April in Dimondale, Mich., where the women took the national championship and the combined men and women’s team placed second.

The coed cycling team won its fifth consecutive Ivy Championship and clocked a number of individual times in the top 20 at the USA Cycling National Championship in Grand Junction Colo., at the end of April.

In addition, the recently formed powerlifting club had four competitors qualify for the USA Powerlifting Collegiate Nationals in San Antonio, Texas, in early April, with two Dartmouth lifters ranking in the top 10. Like skiing, all three of these teams are ranked in competition based on the combined scores of individual members.

Dartmouth has 35 club teams—ranging from recreational sports like badminton and table tennis to club versions of the varsity sports like soccer and hockey, which are involved in competitive leagues. About 1,100 students participate at all levels, from beginners to top-ranked athletes who opt not to commit to a varsity team, says Heather Somers, director of intramurals and club sports.

“The distinguishing feature of club teams is they are completely student run. Even the creation of the team comes down to a group of people applying for club recognition. They handle league membership, division placement, they arrange travel and general management,” Somers says.

“I think it’s a great opportunity for students to develop their leadership potential.”

The other teams that qualified for national league tournaments this season were: