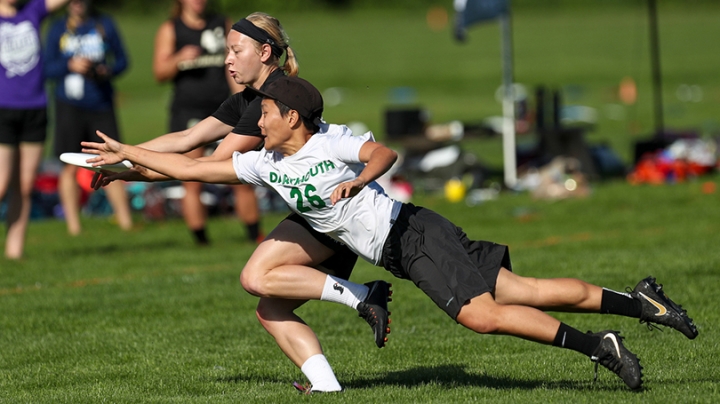 Caitlyn Lee ’19, No. 26, dives for the Frisbee at the USA Ultimate DI Championships. (Photo by Paul Rutherford for UltiPhotos)
6/06/2018
Body

Dartmouth’s Princess Layout went 7-0 in the tournament, advancing through the quarterfinals and semifinals without a loss, and defeating Colorado 15-9 in the championship game on May 28.

Lily Eisner ’18, who graduates Sunday with a chemistry major modified by math, says the back-to-back championships are the result of years of development, hard work, and player recruiting, which is entirely in the hands of club team members. Eisner, whose sister Emily Eisner ’14 played for Princess Layout, says the women’s ultimate team was a major factor in her decision to come to Dartmouth.

The team’s passion for the sport, along with the commitment of all the players to academics, made the difference, she says. “The Ultimate team has been so important to my time at Dartmouth because these people are not just my teammates—not just people that I play with and work out with—they are my friends and support network. It’s been an incredible experience not just because I love Ultimate, but because the community is so supportive and wonderful.”

After graduation, Eisner will begin work for the YWCA at the organization’s headquarters in Washington, D.C., where she will do advocacy work on women’s issues such as domestic violence prevention and will be developing programming for YWCAs across the country. She also plans to join an ultimate club in the D.C. area.

Other clubs that finished their seasons in the preliminary rounds of national competitions include the Dartmouth Rugby Football Club, which completed the season with its ninth straight appearance in the Sevens Collegiate Rugby Championship in Philadelphia last weekend. Dartmouth won its four-team pool and advanced to the Cup quarterfinals, losing to UCLA in sudden death overtime.

In April, the men’s and women’s club volleyball traveled to the NCVF Collegiate Championships in St. Louis, Mo., ending the season in a preliminary round, and co-ed club tennis finished 15th at the USTA national college championship in Orlando, Fla.

Dartmouth has 35 club teams—ranging from recreational sports like badminton and table tennis to club versions of varsity sports like soccer and hockey—that are involved in competitive leagues. About 1,200 students participate, from beginners to top-ranked athletes who opt not to commit to a varsity team, says Heather Somers, director of intramurals and club sports.

“I think it’s a great opportunity for students to develop their leadership potential,” she says.