Soon after arriving at Dartmouth to begin his first year, Graeson McMahon ’15 pretended he was a carrot. 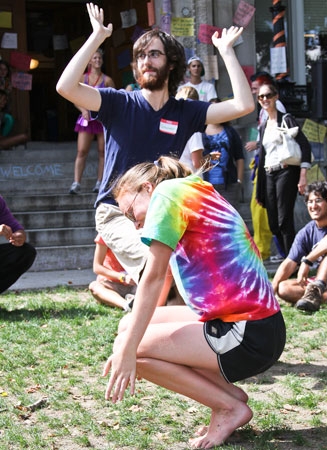 “I’m a little out of my comfort zone, but I’m having fun,” said McMahon of Hampstead, N.H., who moved his body like a carrot to win a “vegetable off” (as opposed to a dance off) during the first day of the Dartmouth Outing Club Trips, which run from August 31 to September 14.

The game was one of the many lighthearted ways that the 76-year-old outdoor orientation program welcomes students to campus. And with more than 95 percent of the class scheduled to participate, the ’15s have already set a new Dartmouth record.

Emily Unger ’11, co-director of 2011 Trips, said the five-day excursions do more than introduce 1,000-plus students to the area’s natural surroundings—from the White Mountains to the nearby Dartmouth Organic Farm. “They help build community right away. Coming to college can be stressful. This helps eases the transition,” she says.

Like other new students, McMahon said the atmosphere he encountered when he first arrived—with friendly students in colorful outfits dancing on the lawn—only reaffirmed his college choice. “It’s amazing. One of the reasons I chose Dartmouth was because the people were so welcoming, and seemed to value cooperation.” 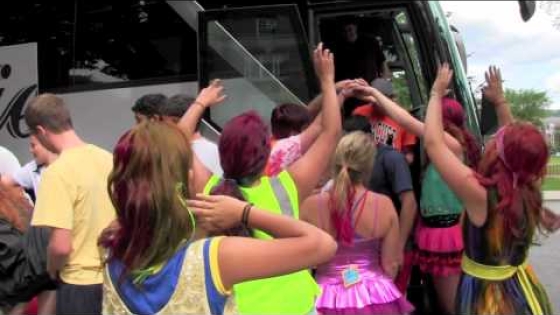 Trips also made the transition easier for some parents. After watching their daughter Jillian Corcoran ’15 dance with her new classmates to “Blame It On the Boogie,” Lisa and Dan Corcoran of Weymouth, Mass., gave her a hug good-bye.

“It kind of makes it easier to leave because they’re having fun,” said Lisa Corcoran. “I have a box of tissues in the car but I might not even need it.”