Video: A Conversation with William Kamkwamba ’14

At age 24, William Kamkwamba ’14 has accomplished more than many can hope to achieve in a lifetime. The Dartmouth undergraduate built a homemade windmill in his native Malawi at age 14 to provide electricity to his family’s home; watched his book The Boy Who Harnessed the Wind spend five weeks on The New York Times bestseller list in 2009; and on January 19 saw the release of a children’s version of his book, which the Wall Street Journal deems “ingenious” and the Boston Globe calls “powerful.” A documentary about Kamkwamba’s life, “Moving Windmills,” is also in the editing stages and the filmmakers hope to release it later this year. 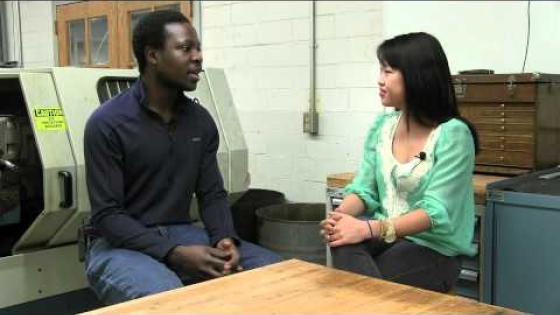 Kamkwamba, who is majoring in environmental studies and minoring in engineering, recently sat down for a video interview (above) with Jessica Chen ’12, the Office of Public Affairs’ Whitney Campbell intern. Kamkwamba discusses what he enjoys about Dartmouth, the projects he’s working on, his hopes for the future, and why he wrote his books.

“I feel that there are so many people in my area or in the world who have great ideas but because of the circumstances they are not able to continue with their ideas,” he explains. “I wanted to share my story with them so that maybe it would be able to inspire them to achieve their dreams.” 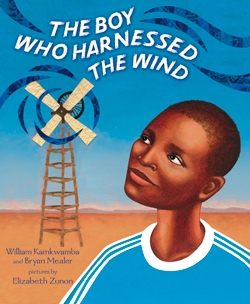 William Kamkwamba ’14’s second book, a children’s version of “The Boy Who Harnessed the Wind,” was released on January 19. (Illustration by Elizabeth Zunon. Photo courtesy of Tom Rielly)

Kamkwamba’s story is inspirational not just because of his achievements, but also because of the challenges he’s overcome, including a deadly famine and having to leave high school due to financial constraints. He continued to study on his own, reading books at the local library and teaching himself to build the windmill from scrap parts he collected. That library in his village is now benefitting from Kamkwamba’s picture book. Thanks to his publisher’s charitable organization, “We Give Books,” 10,000 books will be donated to the Wimbe library and rural Malawi primary schools for every electronic copy of the book that is read.

Kamkwamba eventually resumed his formal education, studying at a school in Malawi’s capital of Lilongwe and at South Africa’s African Leadership Academy. While on his book tour in fall 2009, he visited Dartmouth. The strong sense of community and hands-on engineering program were extremely appealing to him.

As Kamkwamba notes, “At other schools you could maybe use the machines in your senior year. But at Dartmouth I could use the shop as a freshman, so I thought this was better suited to me.” This winter, Kamkwamba is focusing on his major, taking classes in environmental studies and math.

Outside of the classroom, Kamkwamba has immersed himself in a variety of activities, including trying out for the cheerleading team his freshman year, taking a photography class, and regularly playing soccer with friends on the Green. Since last fall he has also been involved with the Dartmouth Humanitarian Engineering program, a group of students that undertake engineering projects to improve communities in need. In recent years, the program has traveled to Tanzania as well as Rwanda helping families install stoves, develop water turbines, and generate wind power.

After graduation, Kamkwamba intends to return to Wimbe, converting his Dartmouth education into real energy resources for his village. Among the projects he’s working on is installing solar panels in some of the primary schools in Malawi so students can use computers and read at night.