During its spring meeting on June 7, the Dartmouth Board of Trustees elected a new Board member. The Board also honored two retiring Trustees and Interim President Carol L. Folt and approved appointments and promotions to faculty positions. Philip J. Hanlon ’77, who begins his term as Dartmouth’s 18th president on June 10, attended the meeting. 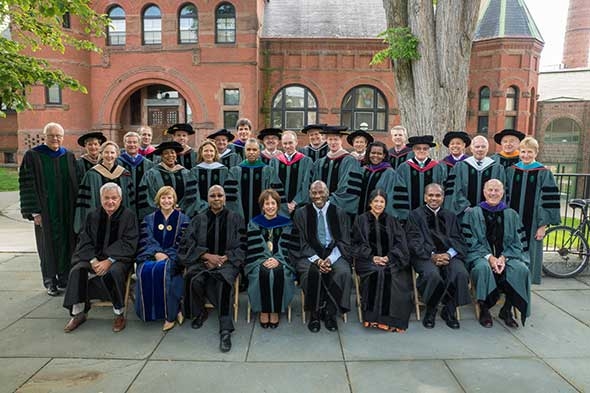 Interim President Carol Folt (center), and members of the Board of Trustees and several Trustees Emeriti with the honorary degree recipients prior to Commencement on June 9. The Board was on campus for its June meeting and to participate in Commencement ceremonies. (Photo by Eli Burakian ’00)

The Board elected Emily Bakemeier ’82 as a Charter Trustee; she will join the Board following Commencement on June 9. Bakemeier is deputy provost for the Arts and Humanities at Yale University, with primary responsibility for the humanities departments and programs in the Faculty of Arts and Sciences as well as for the professional schools of art, architecture, drama, music, and divinity. (See below for additional background.)

The Board also announced that Peter Robinson ’79 will retire from the Board after completing his second term of service. In addition, the Board announced that Marye Anne Fox, Adv ’74, made the difficult decision to step down after two years of service for health reasons and family considerations. The Board held a luncheon on Friday to honor the retiring Trustees and thank them for their commitment and contributions to Dartmouth.

Steve Mandel ’78, chairman of the Board of Trustees, said, “On behalf of my fellow Trustees, I am delighted to welcome Emily to Dartmouth’s Board. Emily is an accomplished leader in higher education and a dedicated alumna, and the Board will benefit from her insight and commitment to Dartmouth. I also would like to thank Peter and Marye Anne for their service to the Board. We are very grateful for their unwavering support of the College.”

At a dinner on Thursday, June 6, in honor of Interim President Folt, Mandel thanked her for her service over the past year. “Carol has led Dartmouth with skill and enthusiasm during the last year, steering the institution through an ambitious strategic planning process. The Board appreciates Carol’s tireless work for Dartmouth and the lasting impact she has had as a teacher, scholar, and leader.”

The Board voted to approve the construction of a new 23-bed sorority house for Kappa Delta sorority at 1 Occom Ridge. Kappa Delta was added in 2010 as Dartmouth’s eighth sorority, and is currently the College’s only sorority housed in a residential hall.

The project will be funded by residential life operations reserves. Construction is slated to begin in September 2013 with completion in July 2014, in time to allow occupancy beginning in fall term 2014.

The Board also affirmed its commitment to open an Affinity House for the LGBTQIA student community. The proposed house will be a 25-bed facility, with a two-bedroom apartment for an adviser, located at 4 North Park Street.

The Trustees remained in Hanover over the weekend to participate in a number of activities related to the 2013 graduates, culminating in Commencement ceremonies on June 9. These included Class Day exercises for undergraduates; Geisel School Investiture; ceremonies for Thayer and the Tuck School of Business; Phi Beta Kappa induction ceremony; the annual Baccalaureate service for all graduates; the William Jewett Tucker Foundation reception honoring students involved in public service and religious life; and a reception and dinner for honorary degree recipients.

Trustees also attended Army and Marine Corps military commissioning ceremonies to recognize four students who completed their academic degrees and respective military training courses. In addition, Trustees participated in a luncheon honoring members of the Class of 1963, many of whom returned to campus to celebrate their 50th reunion.

As previously announced, the Commencement address was delivered by Geoffrey Canada.

Emily P. Bakemeier ’82, MFA, PhD, is deputy provost for the Arts and Humanities at Yale University, with primary responsibility for the humanities departments and programs in the Faculty of Arts and Sciences as well as for the professional schools of art, architecture, drama, music, and divinity. Additionally, she oversees the Institute of Sacred Music, the Center for Language Study, and the Whitney Humanities Center. Bakemeier is an art historian with expertise in 16th- and 17th-century northern European art, particularly early modern French royal portraiture and iconography. An active alumna, in 1992-93 she was the first woman and youngest president of the Dartmouth Alumni Council. She also served as chair of the Committee on Trustees from 1995 to 2002. More recently, she served on the Presidential Search Committee that selected President Hanlon. She has been awarded the Class of 1982 Service Award and received the Dartmouth Young Alumni Distinguished Service Award in 1995. Bakemeier and her husband, Alain Moureaux ’81, live in Guilford, Conn.