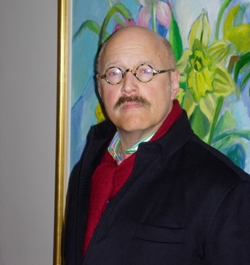 Professor Lawrence Kritzman has been named to the French Legion d’Honneur, reserved for those whose merits or accomplishments have made a positive and significant impact on France. (photo courtesy of Lawrence Kritzman)

Lawrence Kritzman, professor of French and of comparative literature, has been named to the Legion d’Honneur by French President Nicolas Sarkozy. The award, created by Napoleon in 1802 to honor meritorious service to France, is the highest that the country bestows on an individual. It is reserved for those whose merits or accomplishments have made a positive and significant impact on France.

Kritzman’s recognition reflects the “quality of the entirety of [his] publications and [his] many contributions to the promotion and dissemination of French culture.” Kritzman will be inducted into the Legion this spring at a ceremony to be convened by French Ambassador to the United States François Delattre.

“I am absolutely thrilled that Larry Kritzman has been honored in this fashion,” said Adrian Randolph, associate dean of the faculty for the arts and humanities and the Leon E. Williams Professor of Art History. “This award makes visible his enormous contributions to the field of French Renaissance literature, and to the study of French culture more broadly.”

Kritzman’s work has been recognized by the French government before. In 1990 he was made a Chevalier (knight) in l’Ordre des Palmes Académiques, an order which honors educators and scholars. He was named to the higher rank of Officier in that order in 1994. In 2000, Kritzman received the Order of National Merit. That honor, also given at the discretion of the President of France, is the second highest civilian award accorded by the country.

Kritzman holds the John D. Willard Professor of Drama and Oratory, and is a previous chair of Dartmouth’s program in comparative literature. He has been a visiting professor at Harvard, Stanford, and the Ecole des Hautes Etudes (Paris).

The author of several books on the French Renaissance, Kritzman is also the editor of the Columbia History of Twentieth-Century French Thought—a book that garnered him the Aldo and Jeanne Scaglione Prize for French and Francophone Literary Studies from the Modern Language Association of America (MLA) in 2007—and the Columbia University Press series European Perspectives.