Dartmouth Experience: Wills Begor ’12 Leverages Learning Opportunities in and out of the Classroom

Wills Begor ’12 always knew he wanted to help make a difference in the world, but he didn’t realize how many opportunities he would have to make an impact as a Dartmouth undergraduate. Whether co-authoring a public policy paper on innovative ways to finance the manufacturing and distribution of vaccines in developing nations, providing medical care as a Dartmouth Ski Patrol member, or co-founding a nonprofit organization, Begor has made his presence felt in Hanover and beyond. 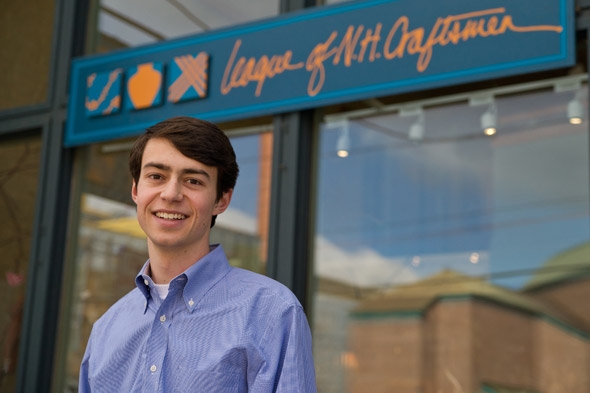 In addition to his achievements in the economics department and as a co-founder of the nonprofit organization Project RightChoice, Wills Begor ’12 is also the youngest juried member of the League of N.H. Craftsmen. (photo by Eli Burak ’00)

An economics major modified with math and a Spanish minor, Begor participated in the Buenos Aires, Argentina, Foreign Study Program (FSP). The Wilton, Conn., native has also spent off terms working for Bank of America’s chief economist in New York City, for McKinsey & Company in India, and for Morgan Stanley in New York—where he will return to a permanent position following graduation in June.

Begor is also a Rockefeller Center for Public Policy Leadership Fellow, a member of Sigma Alpha Epsilon fraternity, and the youngest juried member of the League of New Hampshire Craftsmen.

Dartmouth Now sat down recently to talk to Begor about his Dartmouth experience.

My grandfather had gone to Dartmouth [Adolph “Sam” Franz ’53], and we’d come up and watch football games or go skiing at the Skiway. So I grew up around this campus and it was the place I always wanted to go to college. I applied early decision and luckily I got in.

I loved Econ 26 with Professor [Meir] Kohn; my culminating experience economics course, “Topics in International Economics,” with Professor [Andreas] Moxnes; and Econ 25 with Professor [Christopher] Snyder. Because Dartmouth is such a small school, I can interact with my professors outside of class. They’re not just lecturing and then leaving. I can build relationships with them.

Last August, you co-authored a paper, “Economic Perspectives on the Advance Market Commitment for Pneumococcal Vaccines”, in Health Affairs along with Dartmouth Economics Professor Christopher Snyder and Ernst R. Berndt of MIT’s Alfred P. Sloan School of Management. Tell me about your research and getting your name on a published paper as an undergraduate.

It’s been really interesting to work on a policy paper. If you look at the research I did with Professor Snyder, it’s all about how do you procure vaccines in the most effective way possible.

There’s been vaccine procurement before for years through GAVI (Global Alliance for Vaccines and Immunizations), UNICEF, and through the World Health Organization. But I think this specific policy, this advance market commitment, is the opportunity to really revolutionize the way vaccines are procured for the developing world.

It’s been fascinating and it’s really changed the way I look at the importance of financing, whether it’s on the foundational level, the government level, or in a business. 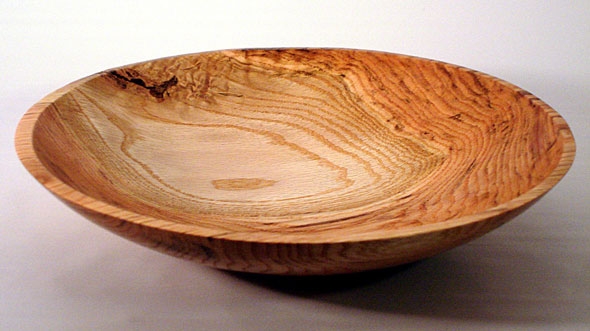 One of the wood bowls crafted by Wills Begor ’12 using the lathe given to him by his grandfather Adolph “Sam” Franz ’53. (photo courtesy of Wills Begor ’12)

What does Project RightChoice—the nonprofit organization you cofounded with Craig Fitzgerald ’11—do?

Project RightChoice is a nonprofit that changes its benefitting charity every year. There are about 30 students involved, and we raise all of the money from two events, a Cinco de Mayo event here on campus and a benefit auction in Boston, which is attended by a lot of alumni supporters and people in the community.

In 2010, we raised $104,000 for the Fisher House, which builds homes on the grounds of VA Hospitals for veterans returning home from war. Then in 2011 we raised $91,000 for water.org. They build wells in developing countries, so we were building wells in Haiti and Ethiopia.

This year we’ve come back home and are raising money for the Upper Valley Haven [a shelter in White River Junction, Vt.] I’ve gotten to learn about three very different causes, which is something I’ve really enjoyed. That’s why we founded Project RightChoice with this organizational structure—so that undergraduates joining the organization would be exposed to four separate social issues over the course of their undergraduate career.

I think a lot of people focus on the direct service application to nonprofits and helping those in need, but if you want to build homes you need someone to pay for those nails and you need someone to nail them in. So there are really two sides to that coin.

With Project RightChoice, we are really just a fundraising and awareness organization and we thought our greatest impact could be made in that tenet of a nonprofit value chain. I’m incredibly surprised that it turned out to be this successful. We didn’t really have that goal when initially we went in. But it’s a testament to what a group of committed students can do when they set their mind to it.

How did you become the youngest juried member of the League of New Hampshire Craftsmen?

That goes back to my grandfather as well. When I was maybe 12 he gave me a lathe, which spins wood, for my birthday. He was the one who taught me how to turn wooden salad bowls. I started turning wooden salad bowls when I was pretty young and fell in love with it and started selling them in a couple galleries in New Hampshire and Connecticut.

I applied to join the League of N.H. Craftsmen during my junior year of high school and was accepted. I have bowls in Hanover, in Concord, all across the state, which is fun. It’s a little creative and artistic outlet for me.

How would you describe your Dartmouth experience?

I didn’t really expect that I would learn so much outside the classroom—whether that be the research I’ve done with Professor Snyder, or Project RightChoice, or Ski Patrol, or anything else I’ve done on campus.

I think that’s really where the value of a Dartmouth experience comes. It’s amazing what you can learn in the classroom, but outside we have intelligent, motivated, innovative people sharing ideas and taking risks. It’s like a little microcosm up here, and people are doing incredible things.