About 200 students from colleges across the Northeast will be throwing axes and cutting through logs with chainsaws for the 66th annual Woodsmen’s Competition being held at Dartmouth on April 27 and 28. 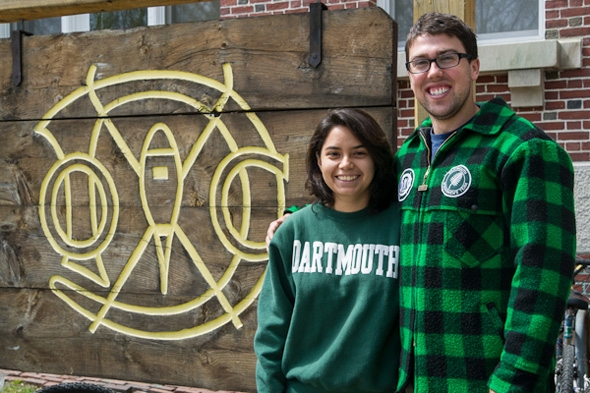 Jennifer Estrada ’14 and Riley Kane ’12 are two of the DOC’s Woodsmen Team members who will compete this weekend. The competition begins on Friday, April 27 at 8 a.m. at the Storrs Pond Recreation Area. At noon on Friday, the competition will move to the Dartmouth Organic Farm. Saturday’s events will be held on the Green, starting at 8 a.m. (photo by Eli Burak ’00)

Sophomore David Rice, a computer science major from New York City and a DOC member, is helping to organize the competition. Rice says practicing for the various events, which include log rolling and bow sawing, is a welcome break from the rigors of classwork.

“It’s a ton of fun and I learn a lot of hard skills, like how to grind and sharpen an axe head,” he says, and unusual facts like “why the teeth on the chainsaw are shaped the way they are.”

Rice says the closest he came to this kind of outdoor activity prior to attending Dartmouth was sailing boats in New York Harbor. “I didn’t get a chance to use a chainsaw in Central Park,” he jokes. 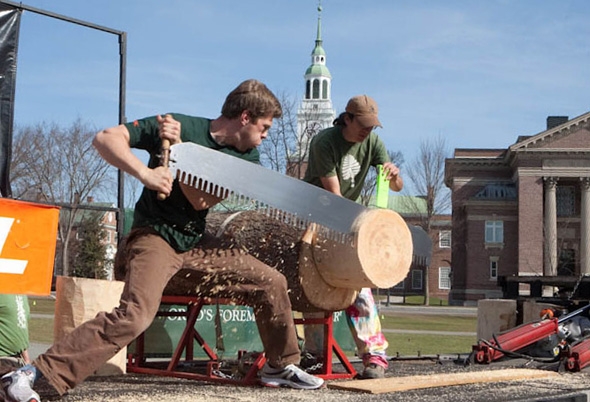 The Woodsmen’s Competition was founded by the Dartmouth Outing Club in 1947 and is hosted by the College every three years. Pictured above are Christopher Farmer ’08 and Benjamin Honig ’05 during the 2007 competition. (photo by Joe Mehling ’69)

Jennifer Estrada ’14, a biology major from West New York, N.J., joined the Woodsmen Team last January as a way to get off campus for a few hours during the day. Now an active and dedicated team member, Estrada looks forward to sharing her experience with her fellow classmates.

“There’s really no way to describe the energy and excitement at a Woodsmen’s competition,” she says. “So having it at the Organic Farm and on the Green this year is a great way for others in the community to experience an event like no other.”

The competition begins on Friday, April 27at 8 a.m. at the Storrs Pond Recreation Area in Hanover. At noon on Friday, the competition will move to the Dartmouth Organic Farm. Saturday’s events will be held on the Green, starting at 8 a.m. For a full list of events, please visit the DOC web page.