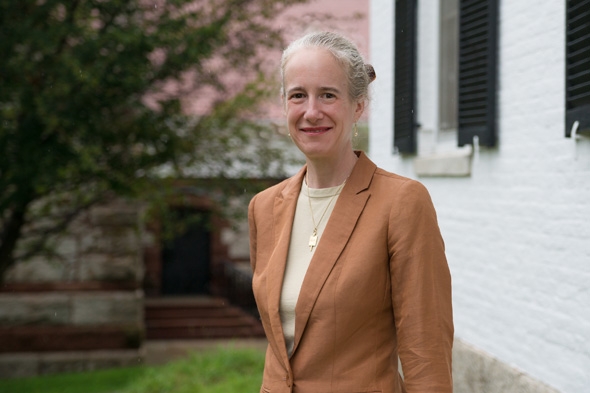 Kate Soule is a third generation Phi Beta Kappa. Her parents and her maternal grandmother were members of the academic honor society. (photo by Eli Burak ’00)

Dartmouth’s Kate Soule, newly elected president of the nation’s oldest academic honor society, takes the honor in stride. And why wouldn’t she? As she puts it, Phi Beta Kappa has been in her life “forever.”

In announcing her election August 3, the national Phi Beta Kappa (PBK) Society praised Soule for her “outstanding record of service to PBK on the national, regional, and local level as secretary-treasurer of the Dartmouth chapter, as president of the PBK Association of Northern New England, as a district chair, and as a PBK Senator.”

All that, and much more.

A third-generation Phi Beta Kappa, Kate Soule recalls helping her mother arrange the doughnut holes for the receptions after annual induction ceremonies at Carleton College, where her parents worked, and where both were Phi Beta Kappas. (Soule’s mother still works as department administrator for the English department.) Her maternal grandmother was a Phi Beta Kappa, too.

“Phi Beta Kappa has really been in my life for as long as I can remember,” she says. “I got to know Phi Beta Kappa personally through my parents’ involvement.”

Soule attended Amherst College, becoming a Phi Beta Kappa herself. After graduation, in 1988, she got an MBA at the University of Massachusetts Amherst, and then her “first real-life” job, at Shimer College in Illinois, and began working at Dartmouth in 1996. As director of Arts and Sciences Finance and Research Administration, she manages the planning, budget, and fiscal-year-end closing processes for the Arts and Sciences as well as supervising research administration within the division.

One of the first things Soule did upon arriving at Dartmouth, she says, was “to find out about the PBK chapter at Dartmouth.” She’s been involved ever since, holding various posts (she is currently secretary-treasurer for the Dartmouth chapter, the Alpha Chapter of New Hampshire) as well as doing the annual calligraphy for Dartmouth’s membership certificates.Having learned a bit of calligraphy during college, Soule increased her skill when she took lessons from the man who’d been doing Alpha Chapter’s calligraphy for many years. Eventually she took over the task.

The Alpha Chapter, established in 1787, is the fourth-oldest chapter in the nation. Every year, about 120 members of Dartmouth’s graduating class —the top 10 percent, based on GPA—are inducted into the society, and Soule works her calligraphy magic on each certificate.

On the presidency (a term of three years): “I look forward to continuing to promote the liberal arts on campus and in the community, to preserve PBK’s position as the nation’s preeminent honor society, to ensure PBK’s fiscal prosperity and to help the Society and its constituent chapters and associations to collaborate and flourish,” Soule says. “It is a privilege to serve PBK as president.”

Outside the office: Is there life beyond her job at Dartmouth and her work with Phi Beta Kappa?Certainly, though it’s quite the balancing act.

Soule is the mother of two daughters, Taylor and Zoe, who are track and field stars at their school in Lebanon, N.H. As they both run track on the national level and participate in Lightning Soccer and other sports, Soule has plenty to do just getting them to practice, meets, and games.

She’s also an active member of the Hanover Lions Club, a reader—her book club is reading Toni Morrison’s Home—and a bicyclist; her goal is to bike 1,000 miles this summer. “I’ve ridden about 700 so far,” she says, which includes 50 logged in the Prouty, an annual event that raises money for Dartmouth-Hitchcock Medical Center’s Norris Cotton Cancer Center.

A member of the finance committee of Northern Stage in White River Junction, Vt., Soule is also treasurer for the MDM Observatory on Kitt Peak, 40 miles west of Tucson, Ariz. (Dartmouth is a part-owner of the observatory.) And in winter, there’s skiing, which she learned to do last year, and working out at the Zimmerman Fitness Center on campus.

And then there’s ballet. “I take ballet at Dancer’s Corner in White River Junction. I’ve been doing that since 2003. I’ve been known to perform on stage … once a year for their recital.”

After all that, says Kate Soule with a laugh, “I sleep — sometimes.”

And one more thing: She keeps up with every new issue of Phi Beta Kappa’s The American Scholar magazine, of course.

Community Conversations: Masks off, Vaccines on 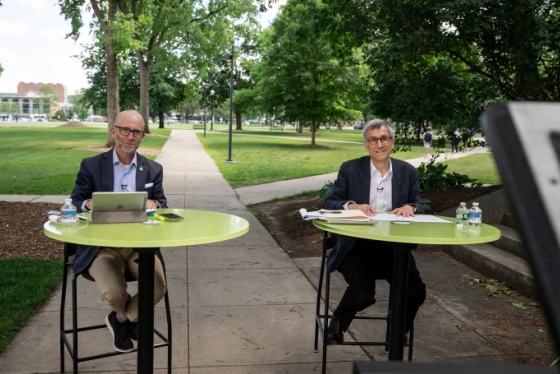