If you are Asian American, could living in ethnic neighborhoods with other Asian Americans be better for your health? The answer is yes, according to Dartmouth Assistant Professor of Sociology Emily Walton, who recently published her findings in the Journal of Health and Social Behavior. 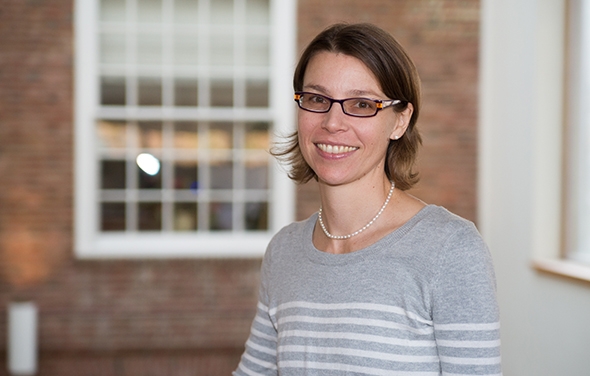 Assistant Professor of Sociology Emily Walton’s findings were recently published in the ‘Journal of Health and Social Behavior.’ (Photo by Eli Burakian ’00)

Walton examined 256 neighborhoods in large metropolitan areas across the United States and found that Asian Americans living in predominantly Asian neighborhoods reported better health as the overall educational level of their neighbors increased. However, this correlation between individual health and neighborhood education levels did not exist for those living in non-Asian neighborhoods.

“Why would we think that education matters in a neighborhood?” she asks. “Research suggests that when a population is highly educated they may advocate for certain neighborhood resources or institutions; that the rising tide of education in the neighborhood lifts everyone, even those individuals who may not have high educational attainment themselves. In the context of an Asian ethnic neighborhood, these institutions and resources accompanying higher levels of education may be culturally and socially oriented toward the group, and thus more effective in supporting health.”

Walton also found that while Asian Americans experience less discrimination when living in Asian neighborhoods, levels of social cohesion are not different from those of non-Asian neighborhoods. “This goes against conventional wisdom, which often explains better health among residents of ethnic enclaves as a result of the social support and connection they feel with members of their same racial group,” says Walton, who joined the sociology faculty in July 2012.

Walton’s findings are at odds with the historic perception of ethnic neighborhoods as disadvantaged enclaves that immigrant residents leave for more integrated neighborhoods once they are financially able to do so.

“This negative image of ethnic neighborhoods is being dispelled by the residential patterns of contemporary Asian Americans,” Walton says, “as many, even those with a high socioeconomic status, choose to settle and then remain in predominantly Asian American neighborhoods.”

As the racial and ethnic makeup of the U.S. continues to diversify, Walton’s findings add new complexity to the literature on segregation and ethnic neighborhoods. According to the 2010 U.S. Census, approximately 14.7 million people (5 percent of all Americans) identified their race as “Asian alone,” and this number is growing as Asians continue to immigrate to the U.S. in large numbers.

“Scholarship has tended to focus on levels and rates of integration and assimilation among current immigrants and the next generation, and that has been their measure of successful incorporation,” Walton says. “But we might do better to re-think that model, and instead say that living in an ethnic neighborhood in the second generation and beyond could actually be beneficial for these reasons.”