Physicist Stephon Alexander, the E.E. Just 1907 Professor and director of Dartmouth’s E.E. Just Program, has been selected as the 2013 Edward A. Bouchet Award recipient by the American Physical Society (APS). 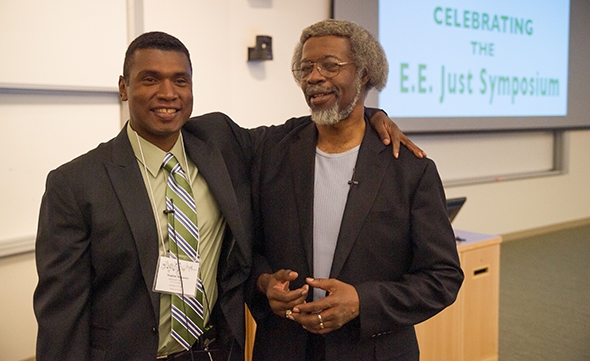 In its announcement, the society cites Alexander “for his contributions to theoretical cosmology, in particular the interface between fundamental physics and early universe cosmology, that includes work in leptogenesis, and parity violating effects in quantum gravity, as well as for communicating many ideas of this field to the scientific community and the public.

Alexander was joined by Sylvester James (Jim) Gates Jr., the John S. Toll Professor of Physics at the University of Maryland, during the recent E.E. Just Symposium at Dartmouth. Gates had received the Bouchet Award in 1994—its inaugural year. The Maryland string theorist serves on President Barack Obama’s Council of Advisors on Science and Technology.

The award is named for Edward Bouchet (1852-1918), the first African-American to earn a PhD from an American university (1876) and the first African-American to graduate from Yale University. The APS created the award ”to promote the participation of under-represented minorities in physics by identifying and recognizing a distinguished minority physicist who has made significant contributions to physics research.“

Edward A. Bouchet was the first African-American to earn a PhD from an American university. (Photo courtesy of American Physical Society)

“I am gratified to be counted among the distinguished recipients of this award over the years, whom I regard not only as great physicists but as pioneers in promoting excellence among under-represented minorities into our field,” says Alexander. As part of the award, Alexander will receive a stipend of $3,500 plus support for travel to an APS meeting, where he will receive the award and give a presentation.

The Edward A. Bouchet Award was established by the APS Committee on Minorities in Physics and made possible by a grant from the Research Corporation, a private foundation for the advancement of science and technology.

The American Physical Society describes itself as a nonprofit membership organization working to advance and share the knowledge of physics through its outstanding research journals, scientific meetings, and education, outreach, advocacy, and international activities. APS represents more than 50,000 members, including physicists in academia, national laboratories, and industry in the United States and throughout the world.