The LuminAID solar light, developed by Dartmouth engineer Anna Stork ’08 and her classmate Andrea Sreshta at Columbia University’s Graduate School of Architecture, was featured on NBC’s Today Show as one of the top technology trends for 2013. 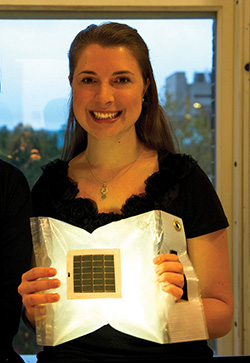 Designed in the wake of the Haitian earthquake, LuminAID is the world’s first inflatable solar light. Waterproof and easy to ship, it lasts longer than a battery-powered flashlight, is safer than a kerosene lamp, and doesn’t require expensive rechargeable batteries.

“It’s just a solar panel with a thin rechargeable battery connected to LED lights, with the circuit integrated into the plastic. The innovation is the combination of the solar with the inflatable,” says Stork, who filed for a full patent under the offices of Columbia Technology Ventures.

LuminAID produces four to six hours of light and can be recharged in five to six hours. The device can be recharged up to 800 times and has a total shelf life of two to three years, says Stork, who first began thinking about merging sustainability and design while at the Thayer School of Engineering.

“I took away a lot from my course in materials science at Thayer. I also learned about solar and renewable energy,” says Stork, who incorporated LuminAID Lab in 2011 with the intent of providing an immediate lighting solution for individuals in regions affected by natural disasters and wars. Her goal has since expanded as more and more hikers and campers want the solar lights for outdoor recreational use.

Description
Amro Farid, an associate professor of engineering, is quoted in a story about how the regional grid in New England needs updating to carry more renewable energy from solar, off-shore wind, and other clean-energy projects.
Logo
Image