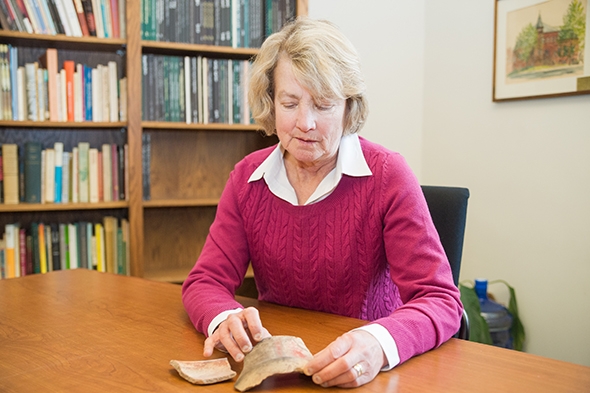 Deborah Nichols, the William J. Bryant 1925 Professor of Anthropology, examines potsherds of a type known as Zacatenco white ware, found at sites in central Mexico dating circa 1050-750 BC. (Photo by Eli Burakian ’00)

Nichols’ current research targets central Mexico, a region known for its monumental architecture and material riches, but her interests lie with the people who created these edifices and artifacts, specifically their complex and extensive trading activities based on craft production.

“One thing I have come to appreciate is that much of our understanding of economic history was often looking from the top down. But I think that a lot of specialization, a lot of market development is actually coming out of household economic strategies, at least in this part of the world,” says Nichols.

“There has never been a state government that didn’t have a finance or taxation system, but in pre-Columbian Mexico there appears to have been a commercial dimension to the economy that was not state controlled,” says Nichols. “The issues and tensions we see today in our own economy, between the private sector and the federal government, were assuredly foreshadowed by what is apparent in the archaeological record of ancient Mexico.

”Craft production in Mesoamerica was almost always household based. Some was done by specialists attached to state institutions, but much of it came out of household workshop production. We tended to think of household manufacturing as small in scale, but it is very clear those people developed specialties and engaged in techniques of mass production.“

Nichols contrasts this to the pattern in Mesopotamia, where large numbers of specialists functioned as a part of temple and palace institutions, alongside markets and independent workshops. She sees the highland Mexican system as largely structured around market exchange and independent, producing households.

The Mexican metropolis of Teotihuacán, now restored, was one of the largest cities in the world at its zenith around 450 AD. (Photo courtesy of Wikimedia Commons)

The metropolis of Teotihuacán, with its stately pyramids, sits 25 miles north of Mexico City. At its peak, it had more than 125,000 inhabitants and its influence was felt throughout much of Mesoamerica until the 6th century. But scarcely seven miles to the north of Teotihuacán are the ruins of Otumba, a less impressive Aztec site that flourished in the centuries just before the Spanish conquest (1519-21). Nichols was drawn to Otumba by the abundant remnants of craftwork strewn around the surface.

”There is a whole neighborhood where they were making figurines and various kinds of ceramics,“ she says. ”There was another where they intensively worked agave plant fibers, mass-producing the spindle whorls for them, and there were lapidary workshops. The crafts are specialized and all based in household workshops—not factories.“

Nichols and University of Iowa colleague Thomas Charlton assembled materials collected on the surface at Otumba and from excavations of its workshops. They took their samples to the University of Missouri Research Reactor Center for analysis. Using trace elements in the artifacts, the National Science Foundation-funded lab was able to plot the broad expanse of Otumba’s trading networks. The revelation of Otumba’s importance as a provincial center of craft production up-ended previous Aztec economic models that contended that most craft production was concentrated in the Aztec capital of Tenochtitlan.

Material from another site near the capital, Cerro Portezuelo, prompted reevaluation of other Mexican economic models. Excavations had been carried out by a team from the University of California at Los Angeles (UCLA) led by George Brainerd in 1954-55. The sudden death of Brainerd in 1956 effectively precluded analysis of the material recovered from the site. Even in the absence of the information locked away in UCLA’s coffers, scholars still considered Cerro Portezuelo potentially important to an understanding of Mexican prehistory. It offers an unparalleled record of occupation from the first century A.D. through the era of the conquistadors.

Nichols, working with George Cowgill of Arizona State University, embarked on detailed analyses of the UCLA field notes and applying the latest technologies to the material collections. Their findings shed new light on the political and economic history of the grand city of Teotihuacán.

”We discovered that most of our models of Teotihuacán’s regional economy are probably wrong. Although the city clearly exerted political influence in the region, Teotihuacán didn’t have as much control over the economy in its own hinterland as we would think,“ says Nichols.

Cerro Portezuelo’s trade networks with areas to the west were possibly more important than those of Teotihuacán, probably compromising the metropolis’ power base. Interference by such provincial centers as Cerro Portezuelo with Teotihuacán’s trade and political relations likely contributed to the eventual collapse of the great city and its state system by 600 A.D.

Reflecting on the history of her chosen area, Nichols opines that ”with a stone tool technology, Mexico and Central American were home to the development of multiple ancient civilizations whose interactions moved ideas, goods, and people. Central Mexico has been unusually urbanized and influential for 2,000 years."