“For me, a big part of how I see being an artist is trying to be a witness of my time. Not in a journalistic way, but in a poetic way that will speak to future generations about what happened when I was here,” says painter and printmaker Daniel Heyman ’85, Dartmouth’s fall term artist-in-residence. 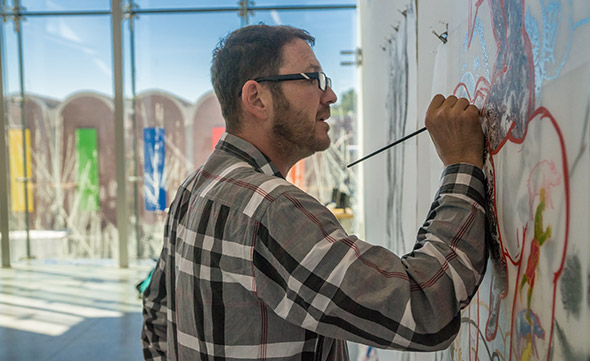 Painter and printmaker Daniel Heyman ’85 will be in residency at Dartmouth during the fall term. (Photo by Eli Burakian ’00)

Heyman, who just two days after his arrival on campus already had some new paintings lining the walls of his studio in the Black Family Visual Arts Center, will deliver a public lecture at 4:30 p.m. on September 24 in the Hood Museum of Art Auditorium. His talk will be followed by an opening reception in the Hopkins Center for the Art’s Jaffe-Friede Gallery, where his exhibition, “Attention,” will be on view through November 24.

Studio Art Department Chair Esmé Thompson, who taught the visual studies major when he was an undergraduate, says, “It has been an inspiration to watch him pursue his artwork in narrative painting and printmaking. Upon graduation, he received the prestigious Reynolds grant and went on to interview and paint portraits of Holocaust victims in France. From that early point in his career, he has pursued his vision with tenacity and courage.”

During the Iraq War, Heyman put a face to the many innocent Iraqi civilians who were imprisoned and tortured in the infamous Abu Ghraib prison. While these former detainees were being interviewed by American civil rights lawyer Susan Burke, between 2006 and 2008, he made 26 dry-point prints and about 40 gouache and watercolor portraits of the victims, encircling their images with text that reveals their stories. These portraits were part of a 2010-2012 traveling exhibition called “Bearing Witness.” A photographer who covered the Iraq War also influenced a piece that is included in Heyman’s exhibition in Jaffe-Friede.

“After thinking about Iraq for four or five years, and doing these very direct literary portraits with text, I wanted to do something much more metaphorical and monumental,” says Heyman, who cites Picasso as a major influence. “I’d always wanted to print on plywood and had just done a presentation with photographer Michael Kamber from The New York Times, who had been embedded with the U.S. Army in Iraq. He said that only two photos of Americans killed on the battlefield were ever published because anything that could turn the American public against the war was censored. His statement that the photographers were blinded and therefore you, the American public, were blinded, really struck me. So the idea of the blinded photographer became the metaphor for my big anti-war monument that’s in this exhibition.” 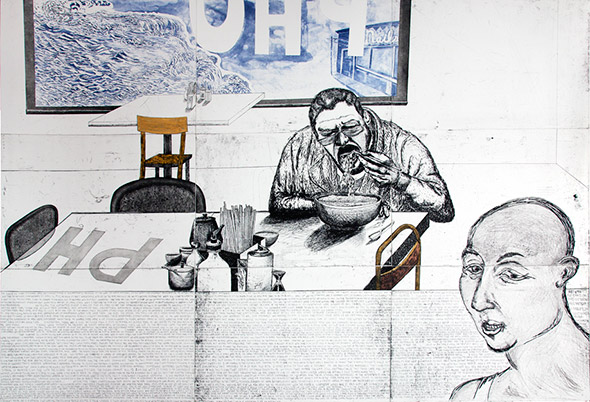 Many of the other images in his Dartmouth exhibition are self-portraits that represent Heyman in different seasons. One is of him in a hammock on Cape Cod, where he spends his summers teaching at the Fine Arts Work Center in Provincetown and at the Truro Center for the Arts at Castle Hill. Another self-portrait is of the Philadelphia resident eating pho in one of his favorite Vietnamese restaurants, with a friend in the foreground. At the bottom of this piece, much like in an Italian Renaissance print, is text that tells the story of his friend’s harrowing journey to America as a Vietnamese refugee.

“Initially, some people have thought he was a waiter or the owner of the restaurant. But if you read his story, you have a totally different perspective on the piece,” he says.

Heyman is looking forward to having time to focus on his work for the next three months, and also to working with students and reconnecting with Dartmouth, where he initially intended to study French and major in architecture. “I did become bilingual in French and went to France three times when I was a student,” he says. “But Esme had hooked me on painting by the time we got to the architecture classes in my fourth year. Esme was a bright and guiding light for me.”

Thompson is thrilled to have her former student back on campus, mentoring and offering guidance to the department’s current students. “He is giving a talk to drawing students about Picasso’s Vollard Suite at the Hood Museum of Art,” she says. “He is giving a demonstration on printing on plaster to the studio art majors and printmaking students. He is meeting with my collage class. He is printmaking in our shop along with our students. His energy and enthusiasm will be contagious.”