William H. Neukom, Dartmouth Class of 1964, has committed $10 million to help Dartmouth become a leading academic institution in an important area of teaching and research in the 21st century—analyzing and applying vast sets of data to problems and questions across the academic landscape. 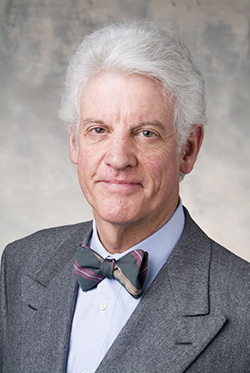 The William H. Neukom Academic Cluster in Computational Science will include three new faculty members in diverse fields who use advanced computational techniques in their work. One of the new professorships will be a distinguished chair named for Thomas Kurtz, the pioneering Dartmouth mathematics professor and computer scientist who, along with former Dartmouth President John Kemeny, created the BASIC computer language 50 years ago. The gift also will fund a postdoctoral fellow in computational science.

“This is the age of ‘big data,’ and complex computational methods are absolutely critical to teaching and research throughout the sciences, arts, and humanities,” Hanlon said. “With this remarkable gift, Bill Neukom honors Dartmouth’s storied past in computing, and leads us to a bright and exciting future.”

Bill Neukom is the founder and chief executive officer of the World Justice Project, an organization devoted to promoting the rule of law throughout the world. A retired partner in the Seattle office of the international law firm K&L Gates and an adjunct lecturer at Stanford Law School, Neukom served as lead lawyer for Microsoft Corporation for nearly 25 years, retiring in 2002 as Microsoft’s executive vice president of law and corporate affairs. He returned to K&L Gates to serve as chairman until 2007.

He has served on the Dartmouth Board of Trustees, as president of the American Bar Association, and as managing general partner and CEO of the San Francisco Giants baseball team. He joined the board of directors of Fortinet, Inc., in 2013, and currently serves on the boards of the Asia Foundation, the Center for Advanced Study in the Behavioral Sciences at Stanford, Ecotrust, the Hague Institute for the Internationalization of Law, the Pacific Council on International Policy, and the William D. Ruckelshaus Center. He chairs the Dean’s Council at Stanford Law School.

In 1995, Neukom and his four children founded the Neukom Family Foundation, which supports not-for-profit organizations in the fields of education, the environment, health, human services, and justice. A philosophy major at Dartmouth in 1964, he went on to earn his LLB from Stanford University. Neukom has received honorary degrees from Gonzaga University, the University of Puget Sound, and the University of South Carolina. He and his wife, Sally, live in Seattle.

In the spirit of Hanlon’s cluster hiring initiative, Neukom’s gift also will create new research opportunities for undergraduates, and will allow faculty members associated with the cluster to develop curriculum and teach undergraduates based on their research.

“My hope for these new faculty members is that they will tackle real-world problems through computational science in their own work, and also empower their colleagues and students across campus to adopt similar techniques,” said Neukom, Trustee Emeritus (chair, 2004-2007). “Dartmouth changed my life, and I’m excited to contribute to scholarship and learning that will shape a new generation of students in the Information Age.”

Neukom’s commitment will be matched with $5 million from a $100 million gift announced in April from an anonymous donor to support Hanlon’s vision for advancing Dartmouth’s academic enterprise. Hanlon committed to using half of that gift to create 10 or more interdisciplinary teams, or clusters, focusing on globally urgent and relevant themes as well as emerging areas of discovery. The college hopes to commit all of the matching money from that gift by the end of 2015.

The William H. Neukom Academic Cluster in Computational Science represents the first of these new groups of faculty members. Among the problems and issues these scholars might come together to address:

More than 50 Dartmouth faculty members, whose fields range from Italian to music to genetics to environmental science, have collaborated with the 10-year-old Institute.

The new cluster of faculty members will similarly serve as a catalyst for the use of advanced computational techniques—in the physical and life sciences, but also in the social sciences, humanities, and the arts, said Dean of Faculty Michael Mastanduno.

“This outstanding gift builds on the strong foundation of the existing Neukom Institute for Computational Science by expanding the depth and breadth of faculty expertise in the use of computational methods across the academic disciplines,” Mastanduno said. “It creates a critical mass of computational studies that enhance the experience of our students and faculty and amplify their ability to compete for major external grants.”