The gift from Val and Greg Jensen ’96 is earmarked for labs and classrooms in the west end project. 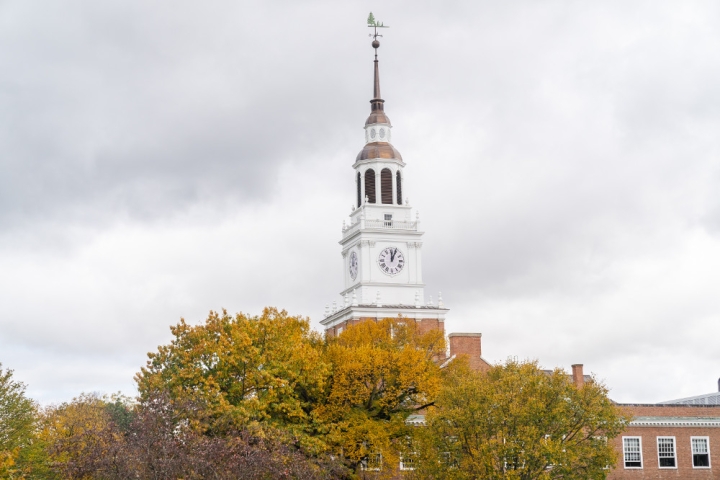 Dartmouth’s vision of redefining technology education through The Call to Lead campaign has received a major boost with a $10 million gift from Val and Greg Jensen ’96, President Philip J. Hanlon ’77 announced Tuesday at a Dartmouth event in Chicago.

The Jensens’ gift helps fund a landmark building that is central to Dartmouth’s plans for an integrated, liberal-arts-based approach to technology education and transforming the west end of campus into a collaborative hub of learning, research, and entrepreneurship. The 160,000-square-foot building, adjacent to the MacLean Engineering Sciences Center, will house the Department of Computer Science and a large portion of Thayer School of Engineering.

“Having a facility that allows—and encourages—students to discuss, design, fabricate, and test their robotic devices and mobile technologies will be a game-changer,” President Hanlon said during the event, which celebrated both The Call to Lead campaign and Dartmouth’s upcoming 250th anniversary. “Val and Greg are making that happen, and we can’t thank them enough.”

With the Jensens’ gift, Dartmouth has raised $147 million toward the $200 million engineering-computer science construction project, which also will house the Magnuson Center for Entrepreneurship, the Digital Arts Leadership and Innovation Lab, and the College’s electron microscope facility. Officials hope to break ground in 2019, Dartmouth’s 250th anniversary.

The new building will reshape how Dartmouth delivers technology education, in part by clustering engineering and computer science into thematic “research neighborhoods.” The Jensens’ gift is earmarked for labs and classrooms devoted to two key areas of research: robotics and mobile technology.

The Department of Computer Science already is developing a range of new technologies for mobile computing platforms that will touch many elements of everyday life, from augmented reality to real-time health monitoring. Mobile technology is the department’s largest research group, bringing together undergraduates, graduate students, and postdoctoral fellows in a vibrant, impact-oriented lab.

Advances in robotics are also changing society in countless ways—from drones capturing data for intelligence agencies to miniaturized robots removing plaque from arteries. The computer science department’s robotics research group, particularly popular with undergraduates, is developing new technologies for transportation, such as autonomous vehicles, as well as other digital advances.

“The confluence of miniaturization of hardware, massive computational power, and big data is enabling transformative technologies in health, transportation, communication, and myriad other domains that we as a society deeply care about,” said Prasad Jayanti, the James Frank Family Professor of Computer Science and chair of the Department of Computer Science. “The Dartmouth computer science faculty are at the forefront of this revolution, passionately engaging students in classrooms and research laboratories on foundational and applied areas of computing. We are thrilled that the new building is coming at a time when our faculty is rapidly expanding for Dartmouth to make an impact on the world.”

Also at the Chicago event, Hanlon announced that Dartmouth has made great progress toward its campaign goal of securing $250 million in bequest intentions. Alumni from nearly all class years—including the Class of 2018—have joined the Bartlett Tower Society, which recognizes alumni, parents, and friends who have remembered Dartmouth in their estate planning. Total commitments from 1,960 alumni now exceed $200 million.

The Call to Lead campaign aspires to raise $3 billion overall—including the $250 million in bequests—to realize three overarching goals: advancing Dartmouth’s distinctive educational model to its fullest potential; making discoveries that improve the human condition; and preparing students for lives of wise leadership. To date, 81,600 participants have committed a total of $1.83 billion.

Laurel Richie ’81, chair of the Dartmouth Board of Trustees and a campaign co-chair, noted that gifts of all sizes from alumni and parents are driving the campaign’s success.

“This Call to Lead campaign knows no geographic bounds,” she said. “It has no age requirement. It sets no dollar figure as a threshold to entry. The Call to Lead is our campaign—yours and mine.”

Among other highlights, the Chicago gathering included faculty and recent graduates sharing their potentially world-changing work.

Leslie Butler, an associate professor of history and Vivien Rendleman ’16, currently a PhD candidate at Duke University, described award-winning research into how women in Richmond, Va., shaped that city’s documented history even before women were allowed to vote.

“This was the first Dartmouth event I had ever experienced away from campus and I didn’t really know what to expect,” said Pat Peterson ’18. “I was absolutely blown away by the support of the entire Chicago community. We all continue to share that same love for Dartmouth, and, when we were all in the same room, supporting such a great event, I felt as if I had never left Hanover.”

The next Dartmouth campaign and 250th anniversary celebrations will be in Boston on Nov. 7; Seattle on Feb. 5; and Palo Alto on Feb. 7. See the full schedule of regional celebrations, which are open to all members of the Dartmouth community.