Actor and Activist Ruby Dee: A Champion of Civil Rights

The actor Ruby Dee, who died June 11 at age 91, was known for her role in the Broadway production of A Raisin in the Sun in 1959. An activist, Dee was known as a life-long champion of civil rights. It was for her work in both realms that she received the honorary degree doctor of arts from Dartmouth in 2011. 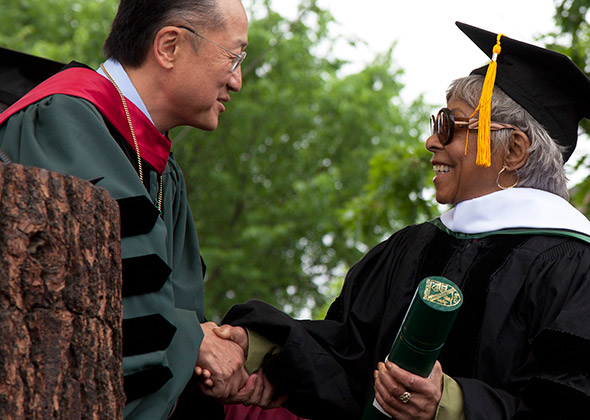 Her Dartmouth degree joined a long list of other honors, including an Emmy, a Grammy, two Screen Actors Guild awards, the NAACP Image Award, Kennedy Center Honors, the National Medal of Art, and the National Civil Rights Museum’s Lifetime Achievement Award, as well as membership in the Broadway Hall of Fame.

Although born in Cleveland, Ohio, Ruby Dee considered herself a product of Harlem, where she grew up and began her career as a member of the American Negro Theatre. She received her BA from Hunter College and later studied acting with Paul Mann, Lloyd Richards, and Morris Carnovsky.

Her most recent roles were in 2007 films: American Gangster, with Denzel Washington and Russell Crowe; Steam, with Ally Sheedy; and the independent film All About Us.

In 2005, she starred in Naming Number 2, a New Zealand comedy-drama that won the Audience Award at the 2006 Sundance Film Festival and for which she was awarded New Zealand’s highest acting honors. She was featured with Julie Harris in The Way Back Home and in the Oprah Winfrey television production Their Eyes Were Watching God, based on the novel by Zora Neale Hurston.

Some of her favorite roles on stage and screen included Lutiebelle in Purlie Victorious (written by her late husband, Ossie Davis); Ruth in A Raisin in the Sun; Lena in Boesman and Lena, for which she received an Obie and a Drama Desk award; and Mary Tyrone in A Long Day’s Journey Into Night, for which she received a Cable ACE award. Other notable credits include Anna Lucasta, Wedding Band, St. Lucy’s Eyes, The Jackie Robinson Story, Uptight (which she co-wrote), Buck and the Preacher, Countdown at Kusini (which she co-produced with Delta Sigma Theta sorority), Do The Right Thing, Jungle Fever, Peyton Place, Go Tell It on the Mountain, The Stand, and Having Our Say.

In 2006, Dee released the selected speeches and writings of Davis in Life Lit by Some Large Vision. She is also the author of two children’s books, Tower to Heaven and Two Ways to Count to Ten; a book of poetry and short stories, My One Good Nerve, which she has adapted into a solo performance piece; and With Ossie and Ruby: In This Life Together, a joint autobiography co-authored with her husband—the audio version of which received a Grammy Award in the Spoken Word category.