Teachers-in-training have long been taught that the fourth grade is when students stop learning to read and start reading to learn. But a new Dartmouth study published in Developmental Science tested the theory by analyzing brain waves and found that fourth-graders do not experience a change in automatic word processing, a crucial component of the reading-shift theory. Instead, some types of word processing become automatic before fourth grade, while others don’t switch until after fifth. 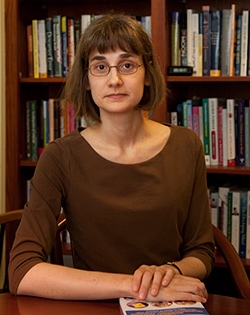 The findings mean that teachers at all levels of elementary school must think of themselves as reading instructors, says the study’s author, Associate Professor of Education Donna Coch.

”Until now, we lacked neurological evidence about the supposed fourth-grade shift,” says Coch, also principal investigator for Dartmouth’s Reading Brains Lab. “The theory developed from behavioral evidence, and as a result of it, some teachers in fifth and sixth grade have not thought of themselves as reading instructors. Now we can see from brain waves that students in those grades are still learning to process words automatically; their neurological reading system is not yet adult-like.”

Automatic word processing is the brain’s ability to determine whether a group of symbols constitutes a word within milliseconds, without the brain’s owner realizing the process is taking place.

To test how automatic word processing develops, Coch placed electrode caps on the heads of third-, fourth-, and fifth-graders, as well as college students. She had her test subjects view a screen that displayed, one at a time, a mix of real English words (such as “bed”), pseudo-words (such as “bem”), strings of letters (such as “mbe”), and strings of meaningless symbols. The setup allowed her to see how the subjects’ brains reacted to each kind of stimulus within milliseconds. In other words, she could watch their automatic word processing.

Coch then gave the participants a written test in which they were asked to circle the real words in a list that also contained pseudo-words, strings of letters, and strings of meaningless symbols. This task was designed to test the participants’ conscious word processing, a much slower procedure.

Most of the 96 participants got a nearly perfect score on the written test, showing that their conscious brains knew the difference between words and non-words. However, the electrode cap revealed that only the college students processed meaningless symbols differently than real words. The third-, fourth-, and fifth-graders’ brains reacted to the meaningless symbols the same way they reacted to common English words.

“This tells us that, at least through the fifth grade, even children who read well are letting stimuli into the neural word processing system that more mature readers do not,” Coch says. “Their brains are processing strings of meaningless symbols as if they were words, perhaps in case they turn out to be real letters. In contrast, by college, students have learned not to process strings of meaningless symbols as words, saving their brains precious time and energy.”

The phenomenon is evidence that young readers do not fully develop automatic word processing skills until after fifth grade, which contradicts the fourth-grade reading shift theory, she says.The brain waves also showed that the third-, fourth-, and fifth-graders processed real words, psuedowords, and letter strings similarly to college students, suggesting that some automatic word processing begins before the fourth grade, and even before the third grade, also contradicting the reading shift theory.

“There is value to the theory of the fourth grade shift in that it highlights how reading skills and abilities develop at different times,“ Coch says. ”But the neural data suggest that teachers should not expect their fourth-graders, or even their fifth-graders, to be completely automatic, adult-like readers.”

Written by
Shea Drefs
Share this
FacebookTwitterEmail
In the News