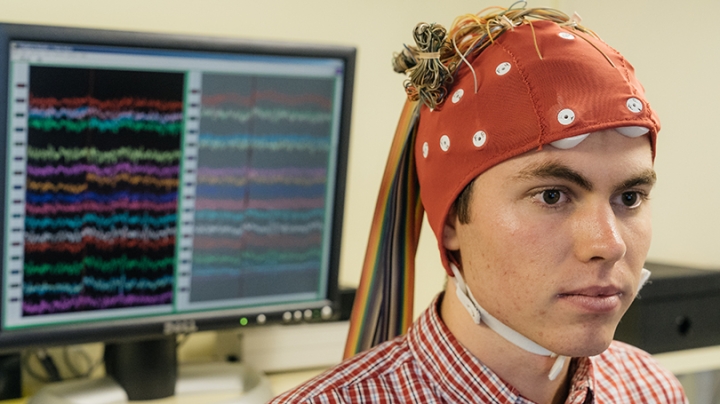 Kevin Griffee ’19, a research assistant in the Reading Brains Lab, wears a cap fitted with electrodes used in an experiment about the process of rhyming. (Photo by Eli Burakian ’00)
7/25/2017
Body

Editor’s note: Staff writer Charlotte Albright stopped by Dartmouth’s Reading Brains Lab the other day, and found herself participating in an experiment about reading and the brain.

When, in the nursery rhyme, Jack and Jill go up a hill, they’re teaching children more than how to fetch a pail of water. They’re also improving their reading skills.

Researchers have found a connection between knowing how words rhyme and knowing how to read them. Good rhymers tend to become good readers. But there’s more to be known about what, exactly, occurs in our brains when we encounter two words that sound alike. For example, what happens if we are shown the pictures of, say, a cat and a hat, rather than the word themselves?

That’s what Professor of Education Donna Coch and her undergraduate lab assistants are learning from an experiment they’re conducting at the Reading Brains Lab in the Department of Education. Supported by funds from the Nelson A. Rockefeller Center for Public Policy, the study asks participants—about 80 college students—to make decisions about whether pairs of words do or do not rhyme.

“Sure,” I said, hoping that as a 66-year-old avid reader, I wouldn’t embarrass myself.

On a hot summer morning, I showed up at Coch’s four-room lab in the basement of Raven House and met one of her lab assistants, Kevin Griffee ’19. He’s taken this test, and now he administers it to other college students in the experiment. About 60 have participated so far.

“Our research sheds light on how people process rhymes, and how they process reading in general, information we believe is valuable in teaching kids to read,” says Griffee.

He fitted me with a stretchy red cap studded with electrodes connected to wires that send amplified signals to a computer, showing how the brain is activated by stimuli.

Coch took me into a small nearby room and settled me into a comfy armchair in front of a monitor. It felt as if I were about to watch television, but in a very disciplined way. Coch asked me not to blink or move my head when pairs of images appeared. Even the slightest movement would make it hard to detect which brain waves were doing what.

Before starting the rhyming experiment, Coch showed me what my brain activity looked like, in real time. A stack of multi-colored rows of waves, each wave about a half inch tall, crawled across the screen as I thought about the story I would be writing for Dartmouth News. Each wave represented a different activity my multi-tasking brain was attempting.

“Do you want to see the difference between being so alert to what we are doing, and just kind of being in Zen mode?” Coch asked. “Can you try to stop thinking so hard for a minute?”

I tried to zone out. The rainbow waves got slightly taller and wavier. Apparently, Coch says, I excel at suddenly not thinking very hard.

Then came the test. Images appeared on screen in quick succession. If two of them—perhaps a star and a car—rhymed, I squeezed the right trigger on a game console. If they didn’t rhyme, I squeezed the left one. The pictures moved along fast—in a few cases, a little too fast for me to identify with certainty.

Coch would rather not discuss her findings in detail until all the participants have been tested, so as not to compromise the experiment. In general, she says, rhyming seems to be congruent with other reading-related tasks.

This is just one of many experiments Coch conducts in her reading brains lab. On another project, she is working with local elementary school children in conjunction with the nonprofit, Vermont-based Stern Center for Language and Learning, which helps teachers design remedial reading programs.

“I want to help teachers understand more about learning and development. I never tell them how to teach—just because something works one way in a laboratory doesn’t mean that it will work that way in a classroom—and there is also always psychology involved between teachers and students. But understanding research into the reading brain really can inform choices about curricula, or about working with an individual child,” says Coch.

Researching the brain is also a career gateway for undergraduate students who help Coch with these experiments. Griffee says his work in the lab played a part in his decision to continue his education. He’s been admitted, early decision, to the Icahn School of Medicine at Mount Sinai in New York City.

“I’m not sure what specialty I will eventually pursue, but it will likely relate to neuroscience,” says Griffee. “Analyzing the brain waves of someone who is thinking or performing a task—that’s been amazing.” 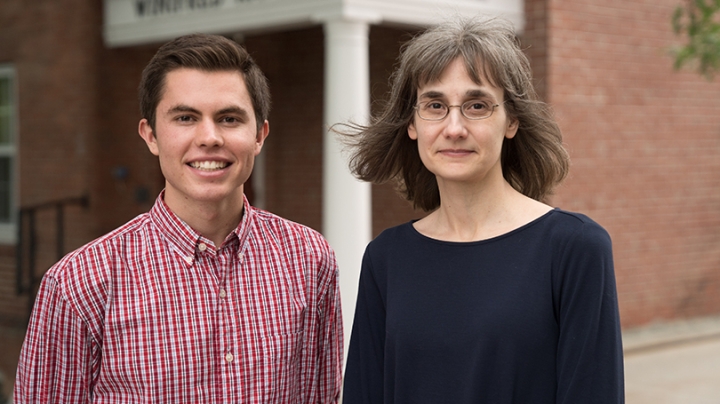 Kevin Griffee ’19 and Professor of Education Donna Coch are working together on a study about how the brain processes rhymes. (Photo by Eli Burakian ’00)
Written by
Charlotte Albright
Share this
FacebookTwitterEmail
Quoted
Quote