‘Change the Subject’: A Hard-Fought Battle Over Words 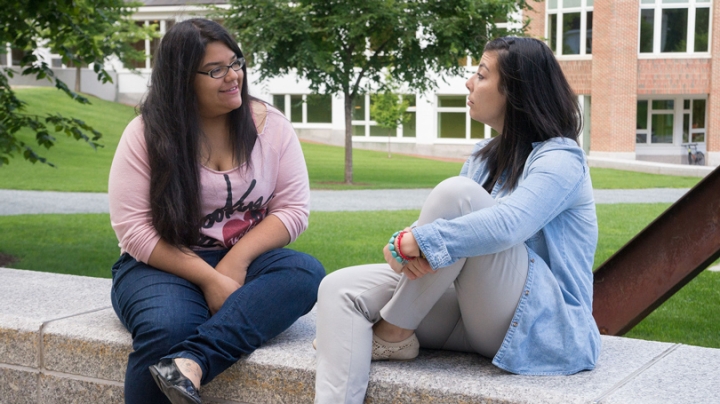 Daniela Pelaez ’16, left, and Melissa Padilla ’16 were part of Dartmouth’s effort to persuade the Library of Congress to stop using the subject heading “illegal aliens” to describe works about noncitizens who have entered the United States without authorization. (Photo by Eli Burakian ’00)
4/22/2019
Body

Nearly five years ago, a group of Dartmouth students, working with Dartmouth librarians, started waging a daunting battle at the highest levels of government—and almost won.

Outraged by the fact that the Library of Congress uses the phrase “illegal aliens” to describe works about noncitizens who have entered the United States without authorization, they petitioned the LOC to replace the subject heading. Their activism grabbed headlines and spurred speech-making in Congress, but, ensnared in a political debate, the controversial heading has still not been changed.

The students—now alumni—are keeping the issue alive with Change the Subject, a new documentary about their campaign. The film will have a special advance screening at 4:30 p.m., April 27, at the Loew Theater in the Black Family Visual Arts Center (BVAC). 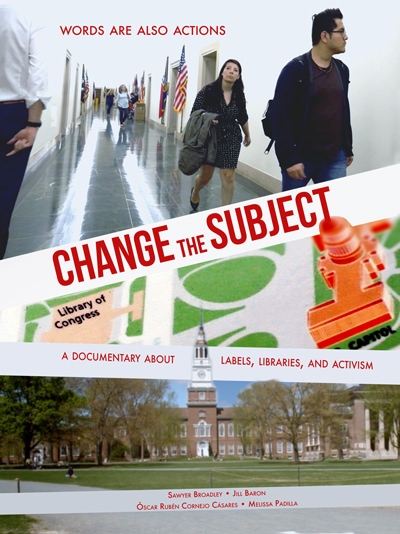 A new documentary film, “Change the Subject,” chronicles a Dartmouth-based effort to change the subject heading “illegal aliens” used by the Library of Congress. (Photo courtesy of Change the Subject)
The production team includes Jill Baron, librarian for romance languages and Latin American studies; Oscar Cornejo ’17; Melissa Padilla ’16; and Sawyer Broadley ’08, who worked for Dartmouth’s Media Production Services prior to launching his own company.

The seeds for the documentary were sown when Baron made her own short video to present at a library conference. It was so well received that she and the others involved in the campaign requested and received funding from Dartmouth to make a longer film.

Baron can still recall the moment when, as a first-year student, Padilla asked her for help with a research project. They turned to the page in the Dartmouth Library catalog with the Library of Congress subject heading “illegal aliens.” Padilla was deeply offended by the label.

“At first I didn’t see it the way Melissa did,” Baron says. “It took me a second or two. And then it was a moment of reckoning.”

Baron and Padilla re-live that moment in the film.

“I haven’t really looked at that word, (not) since two years ago,” Padilla says in the opening scene.

“I would say that the majority of librarians don’t think of undocumented immigrants as criminals, but I can see how looking at that subject heading, you could be persuaded to think that we do think that way,” says Baron. 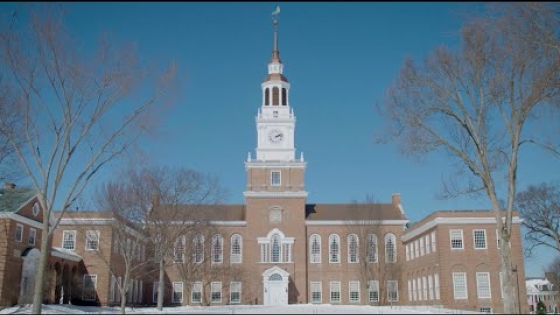 The film shows how Baron and others helped the students make their case. With the help of John DeSantis, a Dartmouth librarian, the Coalition for Immigration Reform and Equality at Dartmouth (CoFIRED) sent a petition to the LOC. Their request was initially denied. Enter the American Library Association (ALA), which lent weight to the cause. The issue even made it into a speech delivered to Congress by Rep. Joaquin Castro, a Democrat from Texas, who said, “Neutral descriptors, can, over time, become used as verbal weapons and knives to inflict pain and disrespect and sow division.”

With support from ALA and the LOC, a battle was won. But the war isn’t over yet.

“The Library of Congress has authority over the language it uses, so it was unprecedented for Congress to intervene, but they didn’t ultimately require the library to change the term. They ended up telling the library to abide by the words in the legal code,” says Baron.

And since the term “illegal aliens” still appears in Title 8 of the U.S. Code, the Library of Congress preserves it.

At least, for now.

But in the wake of the 2018 mid-term election, which swept in new U.S. Representatives from diverse ethnic backgrounds, Baron hopes that Change the Subject will revive interest in using a less-demeaning term in the catalog. No matter what happens, she says, the film stands as a testament to the tenacity of a small band of college students who took their battle for respect and dignity all the way to Washington—and, after graduation, documented their experience.

“I knew from the start that this was a great story,” says Baron, “but it was a true collaborative effort to make the film.”

“From working with Oscar, Jill, and Sawyer, I definitely learned about the power of teamwork as it relates to the creative process,” says Padilla.  “Everyone’s expertise helped make this film as robust and thoughtful as it could be. We’ve poured our hearts into this project, so I’m personally hoping that as many people see it as possible.”

“I’d like our audience to walk away from the theater being more mindful of the impact of words,” says Baron. “This is not just a library story. It’s a human story, an emotional story, about fighting for principle.”

Broadley says the film team has been reaching out to libraries, conferences, and other events and institutions across the country, suggesting that they show Change the Subject. “We’ve had to learn a lot about marketing and distributing a documentary very quickly and have been lucky to connect with other Dartmouth-affiliated filmmakers to get insights on this part of the process,” he says. “We’re interested in hearing from anyone who wants to arrange a screening.”

After the April 27 screening at the BVAC, Gerd Gemünden, the Sherman Fairchild Professor of the Humanities, will moderate a question-and-answer session with the filmmaking team. A reception will follow in the BVAC lounge.