Learning to Write With Jane Austen 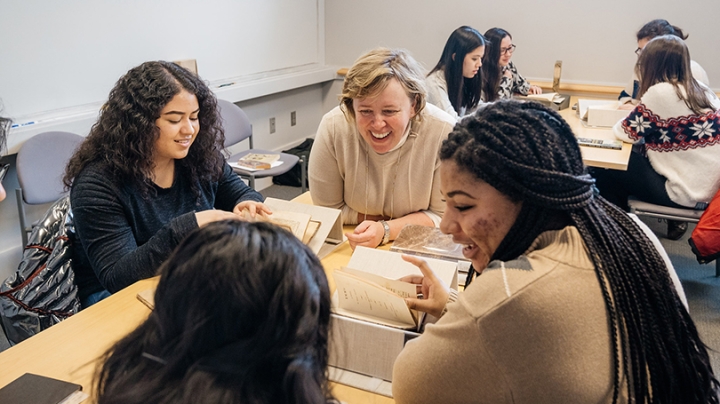 Ever wondered what it would be like to learn to write from one of English literature’s greatest novelists?

This winter, the 16 students in the first-year seminar “Reading Jane Austen”—taught by Carolyn Dever, a professor in the Department of English and Creative Writing—have been discovering the next-best thing. They’ve spent the term immersed in the worlds of Sense and Sensibility, Pride and Prejudice, Emma, and Persuasion—reading the novels, viewing film adaptations, and writing, writing, writing.

First-year seminars have long been a fixture of Dartmouth’s writing curriculum, administered through the Institute for Writing and Rhetoric. The small, intensive courses, offered across disciplines, give students an opportunity to delve deeply into a subject they care about early in their undergraduate experience while developing their skills in written academic discourse.

Why a first-year seminar on Austen? “Austen is one of the great novelists of the British literary tradition, and students can learn a lot both about writing and about literature very rapidly through an experience of immersion in Austen’s work,” says Dever.

Alexandra Rossillo ’21, a member of Allen House, says learning to write with Jane Austen as a model is “challenging. You feel like you have to do her justice in your papers.”

Ashleigh Brady ’21, also a member of Allen House, says she had never read Austen before this class. “She’s hyped up a lot, so I thought I should probably get Jane Austen under my belt.”

She hasn’t been disappointed. “Pride and Prejudice was by far my favorite book that I’ve read in the past three years,” she says. “Professor Dever loves Jane Austen’s books, so that enthusiasm rubs off on us. And she really wants us to learn how to write well.”

In addition to reading and writing, the class has taken advantage of Dartmouth Library’s Rauner Special Collections Library. On a recent afternoon, the students meet there in a small classroom eager to examine a variety of books related to Austen, including first editions of three of the novels.

The first book, the class decides, is pulp fiction—“guilty-pleasure reading”—while the second is serious literature. 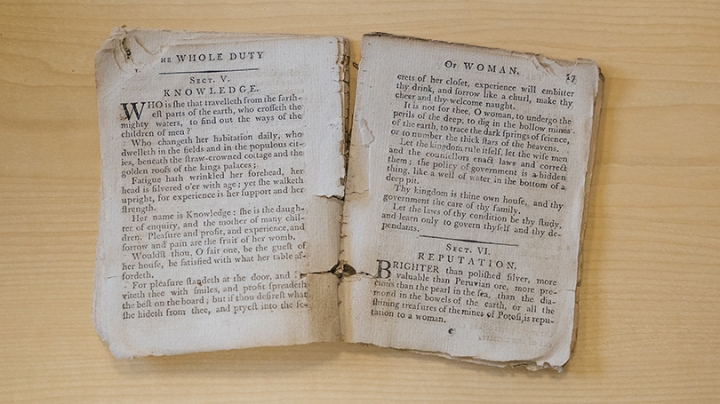 This 1793 edition of William Kenrick’s The Whole Duty of Woman was among the texts students in Professor Dever’s “Reading Jane Austen” class examined during a recent session at Rauner Special Collections Library. (Photo by Eli Burakian)

But they are the same book, Satterfield tells the class—the first edition published under a pseudonym when Burroughs was unknown, the second long after he was the famous author of Naked Lunch. How a book is published changes how readers approach it, Satterfield says, including books, like Austen’s, that are now judged as classics.

“You all signed up for this class because you thought, Jane Austen—awesome, right?” Satterfield says. “There’s an aura about her, you’re reading editions that have notes and explanations to them. But when somebody read Jane Austen in 1811 or 1812, they did not read that. They read a popular novel of the day.”

That lesson in mind, the students explore the books on the tables: editions of the novels from across three centuries; theatrical adaptions (including one by Winnie-the-Pooh author A.A. Milne) and study guides; and self-help books on family health and ladies’ comportment published around the time Austen was writing, in the early 19th century.

“Our table was centered around women and how they should act,” Brady reports to the group. One book castigates “promiscuous” women from around the world; another “is about the conduct of wives, and a bunch of traits that women should strive to have.”

“It really goes with Emma—Emma taking Harriet under her wing and making her more of a high-class woman,” Brady says. “It shows that men and even women at that time had very misogynistic viewpoints on how very strictly women should act and how you should behave.”

The students learn why Austen’s novels were originally published in three-volume editions (a profitable format for the subscription libraries of the time, which were major book buyers), and speculate about why the first-edition title pages attribute authorship to “a Lady,” instead of naming Jane Austen.

Rossillo calls the opportunity to explore the Rauner collection “one of the coolest things ever. I have a different edition than the Penguin, so that’s already different from everyone else in my class, and then seeing all of these different editions—it just shows you how different people value the books and how it changes over time.”

“Books have histories—they are histories,” says Dever. “Nothing brings history more to life for students than the opportunity to put their hands on the original materials themselves.”

Dever, who left her role as provost in November to return full-time to teaching and research, describes working with her class as “fabulous.”

“There’s nothing better. I love to work with students. I love to be there when they’re making discoveries,” she says. “I’m passionately interested in the things that I have the chance to teach, so to bring them into the circle of engagement is a privilege.”

Description
A poem by Professor of English and Creative Writing Joshua Bennett is featured. “God bless the vulnerable ones. How they call us toward love & its infinite, unthinkable costs,” he writes.
Logo
Image