Dartmouth has been recognized for the exceptional value of its education and acknowledged for the low debt load carried by undergraduates in U.S. News and World Report’s “Best Colleges 2015,” the magazine announced today. 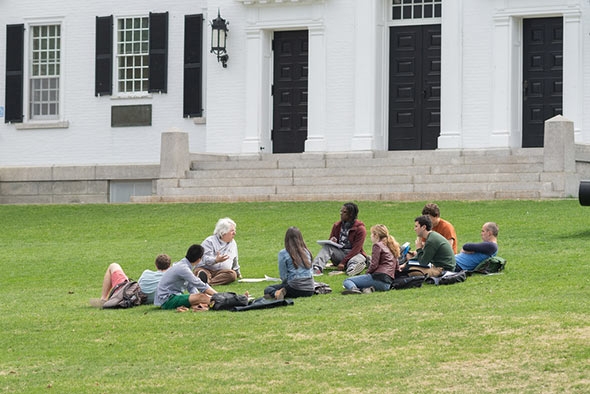 Dartmouth moved up to No. 7 this year in “U.S. News and World Report’s” “Great Schools, Great Prices” ranking. (Photo by Eli Burakian ’00)

The College came in at No. 5 among national universities in terms of least debt carried by graduates, moving up from No. 12 last year. The magazine reports that 56 percent of Dartmouth students graduated with debt last year, with an average debt amount of $15,660. The College’s average debt is down from $17,825 in last year’s ranking.

Also, Dartmouth moved up to No. 7 in the magazine’s “Great Schools, Great Prices” ranking, from No. 8 last year. This scale is calculated by taking into account a school’s academic quality and the 2013-2014 net cost of attendance for a student who received the average level of need-based financial aid.

“The cost of higher education is of critical importance to students and their families. I’m pleased that Dartmouth is recognized for its efforts to keep tuition rates flat in real terms and student debt at a modest level, and for offering a generous and comprehensive need-based financial aid program which meets the full demonstrated need of every student enrolling at the College,” says Dartmouth’s Dean of Admissions and Financial Aid Maria Laskaris ’84.

Dartmouth also ranked in the top 10 for high school guidance counselors’ top picks and for “Focus on Student Success.” It remained in the top 12 in the magazine’s overall ranking of national universities, coming in at No. 11. The College was in the No. 10 spot for the last two years, and three years ago ranked No. 11. Dartmouth ranked No. 4 for undergraduate teaching, and for six years, since the category was created, has ranked among the best schools on the list.

Under the category “A Focus on Student Success,” the magazine gave Dartmouth high marks for study abroad programs, recognizing “substantial academic work abroad” and “considerable interaction with the local culture.” Also in the “Student Success” category, the College was recognized for “Undergraduate Research/Creative Projects,” which highlights colleges where students do “intensive and self-directed research or creative work that results in an original scholarly paper or product that can be formally presented on or off campus.”

U.S. News & World Report categorizes national universities as institutions that offer a full range of undergraduate majors as well as master’s and PhD programs and emphasize faculty research. They are ranked separately from liberal arts colleges on the basis of data gathered on up to 16 indicators of academic quality.

Also this year, Dartmouth has been recognized as an educational leader by national organizations in a number of categories, including as a top LGBT-friendly college by the website LGBTQ Nation; among “America’s Most Entrepreneurial Universities” by Forbes; on the list of “50 Great Affordable Northeast Colleges” by Great Value Colleges; on the “Grateful Graduates Index: The Top ROI Colleges” by Forbes; and in the Princeton Review 150 Best Value Colleges.

Description
Dartmouth is ranked number one among New Hampshire colleges that give students the best return on their investment, according to a SmartAsset study that ranked schools by scholarships, starting salary, tuition, living expenses, and retention.
Articles

Date
5/06/2016
Body
Dartmouth is No. 1 on College Magazine’s list of the top 10 colleges and universities with excellent male a cappella groups.“The Dartmouth...