Dr. Seuss’s 1990 classic Oh, the Places You’ll Go! is this year’s book for the National Education Association’s “Read Across America” day, celebrated annually on March 2, the anniversary of Theodor Seuss Geisel’s birth. Geisel, who graduated from Dartmouth in 1925, was born in 1904. 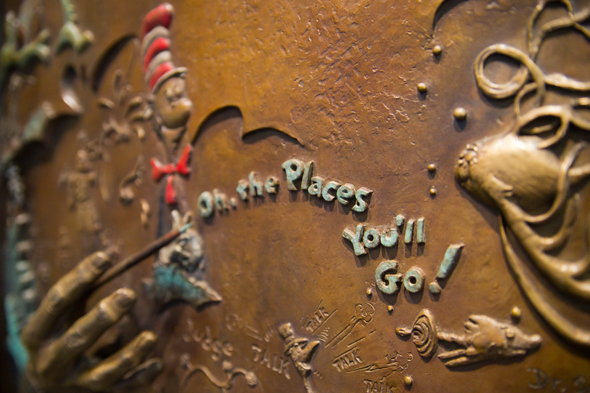 A bronze sculpture in the Dr. Seuss Room at Baker Library pays tribute to “Oh the Places You’ll Go!” (Photo by Eli Burakian ’00)

The book’s title, used to inspire millions of readers every year (especially during graduation season), originated at Dartmouth, according to English professor Donald Pease, the Ted and Helen Geisel Third Century Professor in the Humanities.

In his 2010 biography, Theodor SEUSS Geisel, Pease wrote, “When he was a freshman at Dartmouth, the phrase, ‘Oh, the places you’ll go!’ served as the verbal equivalent to a handshake. After being pronounced by one student, it immediately evoked the response, ‘The people you’ll meet!’”
Written by
Office of Communications
Share this
FacebookTwitterEmail
Articles