Read the full story, published by Dartmouth Athletics. The Dartmouth women’s rugby team will compete as a varsity sport beginning in the 2015-16 academic year, announced Director of Athletics and Recreation Harry Sheehy on March 30. 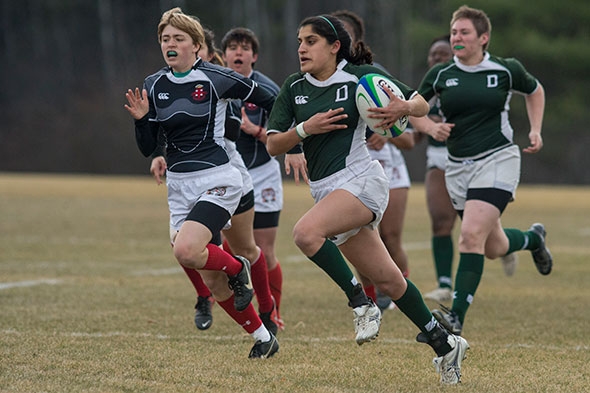 The Dartmouth women’s rugby team will begin competing as a varsity sport during the 2015-16 academic year. Carrying the ball is Peety Kaur ’15. (Photo by Jacob Kupferman ’14)

“Dartmouth has a proud tradition of opportunities and success in women’s sports, and we are excited to embark on this latest chapter with our female athletes,” says President Phil Hanlon ’77.

The Dartmouth Women’s Rugby Club (DWRC) was officially founded in the fall of 1978. The program has produced six U.S. national team players, 13 All-Americans, and numerous Wearers of the Green—Dartmouth’s athletic hall of fame.

The Big Green will continue to compete in the Ivy Rugby Conference, a mixture of varsity and club teams. If five Ivy schools sponsor varsity women’s rugby, it will be eligible to become an official Ivy League sport.