The first female athletics director in the Ivy League inspired her players and colleagues. 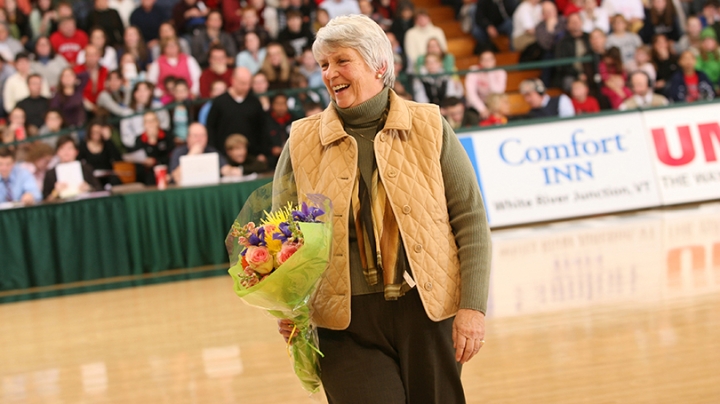 Through the generosity of two alumnae donors, the head coaching position for the Dartmouth women’s lacrosse team will be named in honor of Josie Harper, a pioneering leader in college sports who became the first female athletics director in the Ivy League.

The two anonymous donors, both former lacrosse team members, are each donating $1 million to endow the position in recognition of Harper.

“I am so grateful for my time at Dartmouth and I am humbled by this honor,” says Harper, who retired in 2009. “Dartmouth opened many doors for me. The people who came through those doors impacted my life in too many ways to explain. At the top of that list are my players, as they taught me so much.”

Alexandra Frank, the current head coach of the women’s lacrosse team, says she is honored to be serving in the position that will carry Harper’s name.

“From the moment I stepped foot on campus, I was urged to seek out Josie and learn from her. She embodies everything that is Dartmouth, and we are so fortunate to have her as a pioneer for our program,” she says.

Supporting co-curricular aspects of the Dartmouth experience to develop future leaders is a priority of The Call to Lead campaign. Gifts to Athletics not only enhance the competitiveness of Big Green teams, they also provide an innovative mix of leadership-learning opportunities, particularly through the Dartmouth Peak Performance program.

Harper came to Dartmouth in 1981 as head coach of the women’s lacrosse team. Over the course of 11 seasons, her teams compiled an overall record of 88–69 and tallied a 37–28 record in the Ivy League. The Big Green women’s lacrosse team earned a berth in the 1983 NCAA Tournament and captured its first Ivy League championships in 1986 and 1987.

During her time as lacrosse coach at Dartmouth, Harper also served as an assistant coach for the U.S. team that won the world championship in 1982, and she coached the 1986 U.S. World Cup team.

Lacrosse alumnae remember Harper as more than an outstanding coach. They consider her a mentor and inspiration who deeply cared about their well-being both on and off the field.

“One of the greatest blessings of my life was the opportunity to play for Josie Harper,” says Mary Page Michel ’87, a member of the Friends of Lacrosse Advisory Board. “The lessons I learned from her were equal to anything I ever learned in a classroom. She managed to figure out what motivated each player. We knew that Josie would push us in practice, but the minute we left the field, she was a friend, an advocate, and a supporter. She taught us how to work together as a team, for something bigger than one individual, and it was life-changing.”

For Martha Boss Bennett ’89, Harper has always been “my Bill Belichick.”

“While Josie smiles and laughs a lot more than Bill, she also has the gravitas, the will, and the smarts to make everyone around her better,” says Bennett. “Our Dartmouth lacrosse teams coached by Josie knew that skills would make us good, but heart would make us great. I still use one of her best ‘Josieisms’ to this day: ‘If you are going to do it wrong, do it at 100 percent.’ Josie taught us that life is all about commitment.”

The endowed coaching position named in Harper’s honor is the most recent of many accolades she has received over the years. The National Association of Collegiate Women Athletics Administrators honored her with its Lifetime Achievement Award in gratitude for her dedication to the advancement of women’s athletics; the Eastern College Athletic Conference presented her with the Katherine Ley Award in recognition of her leadership and advocacy for women coaches and administrators; and she is a member of the National Lacrosse Hall of Fame.

A historic expansion of alumnae philanthropy has emerged as one of the great achievements of the current campaign. Dartmouth has set a goal of 100 women pledging gifts of $1 million or more, up from four gifts of that magnitude in the previous campaign, which closed in 2009. To date, 82 women in the Dartmouth community have committed gifts of at least $1 million during The Call to Lead.