“It’s the things you chain yourself to that set you free,” New York Times columnist David Brooks told the Dartmouth Class of 2015 at Commencement.

New York Times columnist David Brooks delivers the Commencement address before a crowd of more than 12,000. (Photo by Eli Burakian ’00)

Speaking to the graduates, Brooks, a political commentator and author of, most recently, The Road to Character, said he wanted to give the ’15s “the ultimate spoiler alert” about their futures: Their happiness in life will come from the commitments they make—to family, vocation, community, and to a philosophy or faith.

More than 12,000 graduates, faculty members, trustees, and guests filled the Green under a sunny sky on June 14 to witness Dartmouth confer more than 1,800 undergraduate, graduate, medical, engineering, and business degrees and to listen to speeches from Brooks, class valedictorian Catherine Baker ’15, and President Phil Hanlon ’77.

“All of us love a lot of things: certain friends, certain subjects, certain dreams, certain professional goals. But you don’t really know the nature of your love until you have tested it with reality.”

Ultimately, Brooks said, “Making a commitment simply means falling in love with something, and then building a structure of behavior around it that will carry you through during those moments when your love falters.”

Brooks said that true commitments are driven by a moral rather than a practical logic.

“Your education has opened you up to possibilities. Adulthood is about closing around commitments,” Brooks said. “Dartmouth has opened your mind. The purpose of an open mind is to close around certain ideals. The highest joy is found in sending down roots.”

Valedictorian: ‘Attention Is a Precious Resource’

Four undergraduate valedictorians from the Class of 2015 were recognized from the podium and stood as the gathering applauded. They are Catherine Baker, of Farmington, Conn.; David Bessel, of Staten Island, N.Y.; Abhishek Parajuli, of Kathmandu, Nepal; and Talia Shoshany, of New York, N.Y.

A committee representing the dean of the faculty and the dean of the College chose Baker from among the four valedictorians to deliver the valedictory address. Speaking from the Old Pine lectern, she encouraged her classmates to “pause, look around, and take a mental snapshot” of the moment.

A neuroscience major who plans to attend the Geisel School of Medicine next year, Baker reflected on our capacity to create such memories.

“When we attend to a stimulus, that object receives a greater representation in our brains. In fact, we must attend to stimuli in order to become fully aware of them. The only problem is that our attentional power is limited—a fact we are all very familiar with. Even as I speak, many of you are probably texting or updating Instagram or checking YikYak,” she said.

“Thus attention is a precious resource. At any time, we have the opportunity to choose how to direct its narrow spotlight. It would be wise for us to allocate our attention carefully—allocate it deliberately to moments like this so they can be cherished always as mental snapshots.”

Hanlon: ‘The Spirit of Dartmouth’

President Phil Hanlon ’77 congratulated the graduates and their families and invited them to think back on a day, 242 years ago, when another Dartmouth student was preparing to leave Hanover—albeit without as much pomp and circumstance.

“Just down the hill—on the banks of the river—a headstrong freshman was putting the finishing touches on a canoe he’d hewn from a tall pine. While your emotions today are mixed, the truth is that this student desperately wanted to leave Dartmouth, because he heard adventure calling.”

That freshman was John Ledyard, Class of 1776, who paddled his canoe the length of the river. “Our own Robert Frost, many years later, would dub him ‘the patron saint of runaway freshmen,’ ” the president said.

“Ledyard’s journey was only beginning that spring day,” Hanlon said. “He would go on to sail the Pacific with Captain Cook and become the first American citizen to see the West Coast; he spent time in Lapland and embarked on a trek across Siberia. In Paris, he became close with Thomas Jefferson. John Ledyard attempted to see the entire world.”

While the drama of Ledyard’s departure still fascinates, the president said what interests him are the things Ledyard took with him from Hanover. “In material terms, it was simple—some food and some books. In fact, his trip almost began with misadventure when he fell asleep reading Ovid just as he approached Bellows Falls.”

However, Hanlon said, Ledyard also took with him the same intangible “heart and soul of Dartmouth” that today’s graduates will take with them: the fellowship of the Dartmouth community, “the broad knowledge and generally applicable intellectual skills” of a liberal arts education, and a deep sense of place.

“And finally, an adventurous spirit. A certain ruggedness at Dartmouth, captured by Ledyard, but kept alive by each of you. A willingness to embrace challenge and opportunity, a readiness to try new paths, the courage to be bold and think big, whether in academics, the arts, business, government, or service.”

“Your Dartmouth experience has forged in you the same independent, adventuresome spirit” as Ledyard and other alumni, Hanlon told the Class of 2015, naming the four alumni present on the podium with him to receive honorary degrees—Russ Carson ’65, Bill Neukom ’64, Terry Plank ’85, and Valerie Steele ’78. “And, in the years ahead, you will need to dig deep and call upon these traits as you venture into the world beyond these woods and do what you can to make it a better place.” 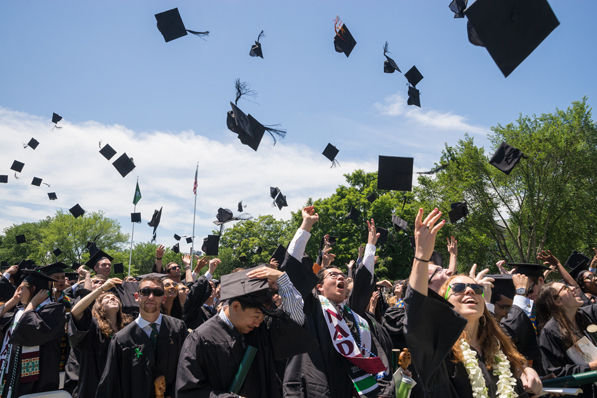 And now it’s time to celebrate! (Photo by Eli Burakian ’00)

The day of celebration saw Dartmouth bestow six honorary degrees in addition to the doctor of letters received by Brooks. The recipients:

Dartmouth awarded bachelor’s, master’s, and doctoral degrees from its undergraduate and graduate Arts and Sciences programs, the Geisel School of Medicine, Thayer School of Engineering, and the Tuck School of Business. The graduates received their diplomas and shook Hanlon’s hand.

The Commencement ceremony capped a weekend of events that included a baccalaureate multi-faith service for graduates and guests on Saturday, which featured speaker Rashida Tlaib, the first Muslim woman elected to the Michigan Legislature, as well as a rousing performance by the Dartmouth College Gospel Choir, directed by Walter J. Cunningham Jr.

Also on Saturday, the Graduate Studies program held its first ever Investiture Ceremony, featuring remarks by Provost Carolyn Dever. Honorary degree recipient Stephen Chu spoke to engineering graduates at Thayer’s Investiture Ceremony. Carlos Rodriguez-Pastor Jr., Tuck ’88, chairman of Intercorp and general partner of Nexus Group, was the speaker at Tuck’s Investiture ceremony. Rodriguez-Pastor is a member of Tuck’s Board of Overseers and was this weekend elected a charter trustee member of Dartmouth’s Board of Trustees.

Lorna B. Stuart, medical director of The Clinic, a nonprofit medical clinic in Phoenixville, Penn., was the keynote speaker at Geisel’s Class Day, which was held June 6.

See a few scenes from the Commencement ceremony in the video below: