Professor Christopher Sneddon has won the prestigious 2016 Meridian Book Award, presented by the Association of American Geographers (AAG) for Concrete Revolution: Large Dams, Cold War Geopolitics and the US Bureau of Reclamation, a book that is as much revelation as revolution. 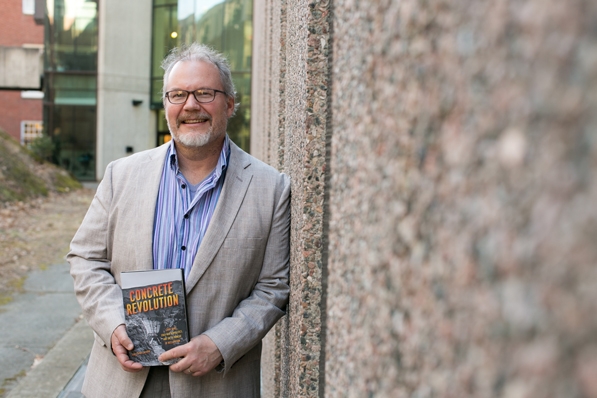 “The AAG informed me the book ‘makes an unusually important contribution to advancing the science and art of geography.’ It was one of 19 considered for the prize, so the win was welcome,” says Sneddon, who holds joint appointments in the Department of Geography and the Environmental Studies Program.

He says most people assume building a dam is just a technological decision. “There’s a river; there’s a basin; it looks like a good place to build a dam. We can get hydroelectricity from it; we can irrigate farms and agricultural areas; and we can have drinking water. It seems like a win, win, win.”

However, he says, “Dams are a lot more than just dams. That’s the point of the book. It’s about geopolitics and the reach of the U.S. Bureau of Reclamation into other countries and other social situations, the whole geopolitical context.”

Concrete Revolution recounts the history of the bureau—the federal agency responsible for dam construction—and how it allied its programs with the U.S. Department of State during the Cold War, extending the bureau’s influence internationally with operations and projects underway on virtually every continent in the world.

“The bureau was doing all this overseas in support of the Cold War geopolitical goals of the United States, providing all this technical assistance in a way that was trying to convince our potential allies that they should help in this global conflict, to convince them to be on our side,” Sneddon says.

While there is now a movement afoot for dam removal, particularly in New England and the Pacific Northwest, he says the concrete revolution is far from over.

“The Chinese government is pushing a dam agenda. They have had 3,000 years of manipulating rivers and moving water around,” he says. “They have actually built more large dams by far than any other country over the course of the last 100 years.”