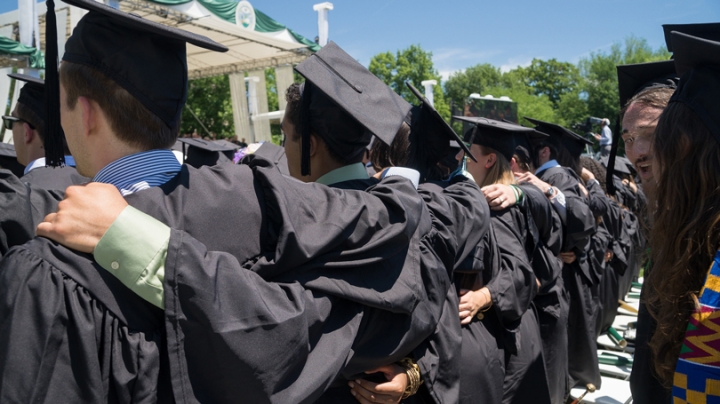 “You can tell people of the need to struggle, but when the powerless start to see that they really can make a difference, nothing can quench the fire,” says Nobel Peace Laureate Leymah Gbowee.

The human rights activist, whose work to build a nonviolent interfaith women’s movement in Liberia helped end that country’s long civil war, will deliver the main address at Dartmouth’s 2016 commencement exercises on Sunday morning, June 12, on the Green.

Gbowee’s leadership of the Women of Liberia Mass Action for Peace—which brought together Christian and Muslim women to stop the Liberian conflict in 2003—is chronicled in her memoir, Mighty Be Our Powers, and in the award-winning documentary Pray the Devil Back to Hell.

In 2003, that movement helped bring Liberia’s warring parties to formal peace negotiations in Accra, Ghana—and once there, according to the Nobel website, Gbowee and 200 activists “formed a human barricade” to block Liberia’s then-President Charles Taylor from leaving the talks before the parties reached an agreement. Faced with arrest, Gbowee “displayed tactical brilliance in threatening to disrobe—an act that according to traditional beliefs would have brought a curse of terrible misfortune upon the men,” the website says.

That moment has been described as a turning point in the peace process that led to the successful transfer of power to a transitional government. In 2011 Gbowee shared the Nobel Peace Prize with Ellen Johnson Sirleaf, Liberia’s first female elected head of state, and Tawakkol Karman, a human rights activist from Yemen. (Sirleaf, known as Africa’s “Iron Lady,” delivered the main address at Dartmouth’s 2008 commencement, where she received an honorary doctorate of laws.)

Gbowee continues to advocate for human rights and peace around the world—particularly for the rights of young women and girls. She leads the Gbowee Peace Foundation Africa, an organization she founded. She was the founding head of the Liberia Reconciliation Initiative and co-founder and former executive director of Women Peace and Security Network Africa, and is a founding member and former Liberia coordinator of Women in Peacebuilding Network/West Africa Network for Peacebuilding. In 2013 she was named a distinguished fellow in social justice at Barnard College. She is currently the distinguished activist in residence at Union Theological Seminary.

President Phil Hanlon ’77 will deliver the valedictory address to the graduates during the commencement ceremony. Also speaking will be the student valedictory speaker from the undergraduate senior class, who will be announced the week of commencement, after final grades are calculated.

The academic procession to the Green begins at 9 a.m., and visitors are advised to be in their seats by that time. Commencement ceremonies begin at 9:30 a.m.

Trained as a social worker and trauma counselor, Gbowee worked to rehabilitate child soldiers during the Liberian civil war, which broke out when she was 17 years old. Her experiences inspired her to organize fellow women activists, Muslim and Christian alike, to work for peace—an effort that helped end the conflict in 2003, and earned her the Nobel Peace Prize.

The mother of seven, Gbowee serves as a member of the High-Level Task Force for the International Conference on Population and Development. She serves on the board of directors of the Nobel Women’s Initiative, the Gbowee Peace Foundation, the Federation of Liberian Youth, and the PeaceJam Foundation, and she is a member of the African Women Leaders Network for Reproductive Health and Family Planning. Gbowee is an Oxfam Global Ambassador, and received the Women’s Refugee Council’s Voices of Courage Award in 2014.

She was recently chosen by United Nations Secretary-General Ban Ki-moon to be one of 17 members of the U.N.’s Sustainable Development Goals Advocacy Group. She has received honorary degrees from Rhodes University in South Africa, the University of Alberta in Canada, Polytechnic University in Mozambique, Cedar Crest College in the United States, and the University of Dundee in Scotland. She holds a master’s in conflict transformation from Eastern Mennonite University in Virginia.

As an undergraduate at the University of North Carolina at Chapel Hill, Barcott co-founded Carolina for Kibera to break cycles of violence and extreme poverty in Nairobi, Kenya. TIME magazine and the Bill and Melinda Gates Foundation named Carolina for Kibera a “Hero of Global Health,” and Barcott volunteered with Carolina for Kibera while serving overseas in the U.S. Marines Corps. He explored the experience of these two forms of service in his book, It Happened on the Way to War: A Marine’s Path to Peace.

After the Marines, Barcott completed master’s degrees at Harvard Business School and Harvard Kennedy School of Government, where he was a Center for Public Leadership Social Entrepreneurship Fellow and served on the Harvard endowment’s Advisory Committee on Shareholder Responsibility.

A World Economic Forum Young Global Leader and TED Fellow, Barcott serves on the boards of the National Democratic Institute and the Environmental Defense Fund-Southeast. President Barack Obama appointed him to the J. William Fulbright Foreign Scholarship Board, and the Department of Defense awarded him the U.S. Military Outstanding Volunteer Service Medal.

After Dartmouth, Skip Battle earned an MBA from Stanford and joined the consulting practice of Arthur Andersen, where he was named partner in 1978 and managing partner in 1985. He retired in 1995 as worldwide managing partner for market development and a member of the executive committee of Andersen Consulting (now called Accenture) to become a senior moderator and senior fellow of the Aspen Institute, where he moderates the Henry Crown Fellowship and other fellowship classes at the Aspen Global Leadership Network. Battle currently serves on the board of directors of Netflix, Workday, LinkedIn, FICO, Unique Solutions, and Expedia, and formerly served on the boards of PeopleSoft, TripAdvisor, OpenTable, Barra, The Masters Select Family of Mutual Funds, and Ask Jeeves, where he served as CEO from 1995 to 2005.

Battle lives in Berkeley, Calif., where he enjoys cycling and performing community service. He and his children, Daniel ’01 and Emily ’05, are developing a wine brand in the Alexander Valley of Sonoma County, California.

A member of the National Academy of Engineering and a fellow of the Institute of Electrical and Electronics Engineers, Arati Prabhakar is director of the Defense Advanced Research Projects Agency (DARPA), where she is focusing the agency’s efforts on rethinking complex military systems in fundamental ways.

Prabhakar joined DARPA in 1986 as a program manager in advanced semiconductor technology and was the founding director of the agency’s microelectronics technology office. In 1993, President Bill Clinton appointed her director of the National Institute of Standards and Technology (NIST), where she led the 3,000-person organization in its work with companies across multiple industries.

Later, Prabhakar was chief technology officer and senior vice president at Raychem, vice president and then president of Interval Research, and a partner with U.S. Venture Partners, an early-stage venture capital firm.

The grandson of Mexican immigrants, Frank Venegas started his work life as a sweeper in a Detroit steel company. He scraped together enough money to establish his own steel company—and developed it into a $250 million enterprise. Today, the Ideal Group is a family-owned company employing 500 people and doing business throughout the world.

After attending the Tuck School’s executive programs for minority entrepreneurs, Venegas was inspired to think about his broader responsibilities to his community. Recognizing economic prosperity as the antidote to urban decay, he relocated his business to southwest Detroit, where he hired ex-convicts, gang members, and others in need of a second chance—helping to transform the community by providing opportunities to young people.

In 2015, Dartmouth honored Venegas with the Martin Luther King Social Justice Award. General Motors awarded Ideal its 12th Global Supplier of the Year Award. Venegas has also received the Automotive Hall of Fame 2014 Distinguished Service Award, and in 2013 was recognized by the government of Mexico with its Ohtli Award—its highest award for philanthropic contributions to community schools and organizations.

Daniel Yergin has been called “one of the planet’s foremost thinkers about energy and its implications” (Fortune magazine). Vice chairman of IHS, a leading economic and energy research firm, and founder of IHS Cambridge Energy Research Associates, Yergin is the author of the Pulitzer Prize-winning The Prize: the Epic Quest for Oil, Money, and Power; The Quest: Energy, Security, and the Remaking of the Modern World; and The Commanding Heights: The Battle for the World Economy.

A director of the Council on Foreign Relations and a trustee of the Brookings Institution, Yergin serves on the advisory boards of the MIT Energy Initiative, the Columbia University Center on Global Energy Policy, and Singapore’s International Energy Advisory Board. He has received a lifetime achievement award from the prime minister of India, the first James Schlesinger Medal for Energy Security from the U.S. Department of Energy, the first Carnot Prize from the University of Pennsylvania, and the United States Energy Award, among other honors.

A graduate of Yale, Yergin was a Marshall Scholar at Cambridge, where he earned a PhD, and has taught at Harvard Business School, the Kennedy School of Government, and the China University of Petroleum in Beijing.

A variety of events take place before commencement, including class day and investiture ceremonies for Dartmouth’s three professional schools, and baccalaureate, a multi-faith service open to all graduates and their guests. Speakers will be added on the commencement website as further information becomes available. The events, in chronological order, are:

Speakers for Dartmouth’s Thayer School of Engineering and Tuck School of Business class day and investiture ceremonies; and for baccalaureate service: