The artist will spend next year painting and studying Renaissance masters in Italy. 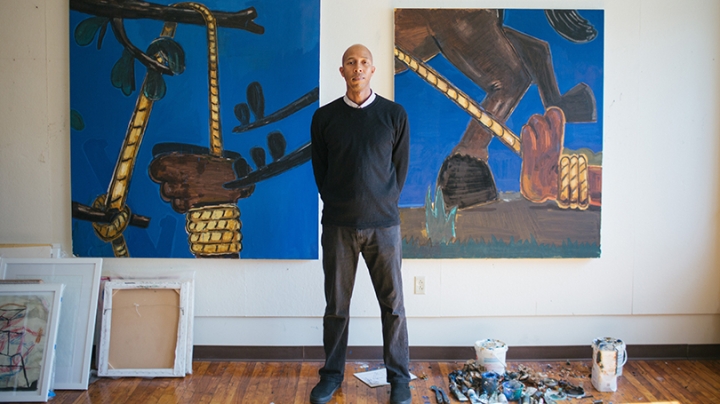 Associate Professor of Studio Art Enrico Riley ’95 has won a 2016 Rome Prize from the American Academy in Rome.

Given annually to about 30 exceptional emerging artists and scholars from around the United States, the Rome Prize will provide studio space, lodging, and a stipend to allow Riley to spend close to a year living—and painting—in the Italian capital.

“The Rome Prize is a huge honor for Professor Riley,” says Barbara Will, associate dean for the arts and humanities. “It is a once-in-a-lifetime achievement, and a shining testament to his national and international reputation as a painter. We are thrilled to be able to share in his success.”

“I’m excited to be going,” Riley says. “It’s something I’ve wanted to do for a long time. It’s just an amazing chance to be dislocated but also extremely focused in my own research.”

In addition to the uninterrupted time to work in the studio that the prize will afford him, Riley says he looks forward to interacting with the community of Rome Prize Fellows and to immersing himself in the art of Italy.

“I’m working on a relatively new body of work dealing with some of the mechanics of painting from late medieval Italian painting into the Renaissance—looking at some of the strategies for pictorial structure that artists such as Duccio or Pietro Cavallini or Giotto use,” he says.

“Those painters are really important to me, in particular with regard to the way that I’m making paintings now. Obviously you can find reproductions of their work online or in print, but it’s a whole other situation to be physically where they are and embedded in the country and the culture where they were made.”

Earlier in his career, Riley primarily worked in abstract forms. But recently his paintings have taken a figurative turn, often reflecting Riley’s perspective on social issues and his personal experience.

Whereas before the artist played with star-like constellation patterns and sharp color contrasts, now his 60-by-48-inch canvases are filled with images of upside-down nude figures, ropes, and gun barrels, against often bright blue backgrounds.

Asked about the evolution of his painting, Riley says, “The act of painting doesn’t exist isolated from time; it responds to the artist’s development as a human being, and as you move through life and have different experiences, how you paint changes, subtly or drastically.”

“It’s really quite mysterious,” he says. “I could give you an explanation, but I think it would slip through my fingers as soon as I uttered it. What I will say is that your art has to respond to what’s changing in your life. At least for me, that’s extremely important. So my new work is a reflection of where I find myself.”

This is not the first time Riley’s work has been recognized. In 2008, he received a John Simon Guggenheim Memorial Foundation Fellowship, and his painting Giant Steps won the American Academy of Arts and Letters Purchase Prize. His paintings are in the collections of the Virginia Museum of Fine Arts, the Columbus Museum of Art, the Nasher Museum of Art, and Dartmouth.

Riley majored in visual studies at Dartmouth, where he discovered that his passion for music translated into his paintings. “There’s something about playing a lot of music that somehow made me receptive to the abstract qualities of the painting medium,” he says.

He went on to earn his MFA in painting at Yale and returned to Hanover to teach in 2001. For him, teaching and making art go hand in hand. “For me, being very active in my studio and continuing to exhibit my work allow me to teach painting and drawing as a lived subject.”