The assistant professor of French won for his essay on a 20th-century Franco-Arab writer. 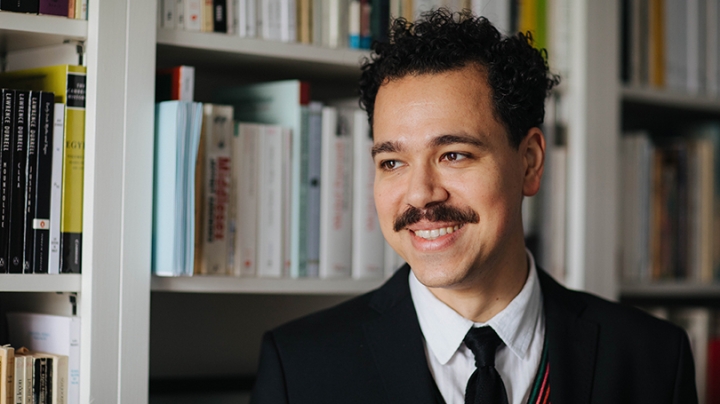 Assistant Professor of French Yasser Elhariry received the William Riley Parker prize for his work on the poetry of Abdelwahab Meddeb. (Photo by Robert Gill)
1/23/2017
Body

As the oldest son of a Muslim Egyptian family, “that was what I was expected to do—go to the U.S., acquire this knowledge, and then go back to Egypt or the Emirates,” he says.

But on his way to earning his BS in computer engineering from Purdue, Elhariry—who grew up learning English, Arabic, and French—took a French literature class.

Elhariry minored in French literature, and went on to complete a master’s in the field at Purdue and a PhD at New York University before joining the Dartmouth faculty in 2012.

Meddeb, the subject of Elhariry’s prizewinning essay, is best known as a 20th-century Franco-Arab writer, critic, and public intellectual. Originally from Tunisia, Meddeb was steeped in Islamic literary and cultural traditions before he came to Europe and, later, America.

While most of the critical work on Meddeb, who died in 2014, has been done on his prose, Elhariry was drawn to his lesser-known lyric poetry, including a chapbook of tercets—Les 99 stations de Yale, written while Meddeb was visiting Yale in the early 1990s—that draws on classic Sufi influences as well as European modernism.

“I feel that the compactness of the poetic form just pares down what is most essential to him as a Tunisian, French, Arab, Mediterranean writer, presenting these beautiful stanzas,” Elhariry says.

The MLA committee that selected Elhariry’s article for the Parker Prize called the work “an exemplary model of cross-cultural literary history.”

“Elhariry’s description enriches our sense of the geopolitical dimensions of literature and reminds us how criticism can do justice to world histories and to the imaginations of authors shaping contemporary literature in and across several languages,” the award announcement says.

Elhariry was surprised to learn he had won the prize. “I thought it was a hoax or a mistake. The Modern Language Association is the oldest institution in our discipline, and this is the institution’s oldest prize. It’s a huge honor to be placed within the genealogy of all the other people who’ve received it before me, a lot of whose work I’ve been reading since grad school.”

Meddeb is also the central figure of Elhariry’s first book, Pacifist Invasions: Arabic, Translation & the Postfrancophone Lyric, forthcoming from Liverpool University Press, which examines five poets writing in French and Arabic, and argues for the place of verse in postcolonial Francophone literary studies.

“I make a case for the centrality of Meddeb to the field of French and francophone studies, and lyric studies in general. I think there’s been a total amnesia in relation to poetry in Francophone studies,” he says. “In the late ’70s, early ’80s there was this huge vogue of the novel, and that continues to this day. But I think Meddeb realized that the novel wasn’t enough.”

Elhariry says the support he has received from colleagues at Dartmouth has been invaluable. It includes an intensive manuscript review organized by the Leslie Center for the Humanities, which brought together external scholars as well as colleagues from departments across campus to read and provide feedback on an early draft.

“It’s a different object now, thanks in large part to that review,” Elhariry says. “I completely rethought the structure.”

Elhariry brings his passion for poetry into the classroom. “One of the lovely things about being here is being able to teach everything from ‘French 1’ to ‘French 70,’ to courses in the master’s program in comparative literature. I always inject the lyric and the poetic in my French courses. And I discover new things when I’m working through texts with my students.”

And though they originally wanted him to pursue engineering, Elhariry says his family has come see the value of his work. “I think they understand what this kind of intellectual pursuit means. It’s concrete to them right now to see that there are people who want to read and learn about this.”