The author and associate professor of English is being recognized for his “efforts beyond the page.” 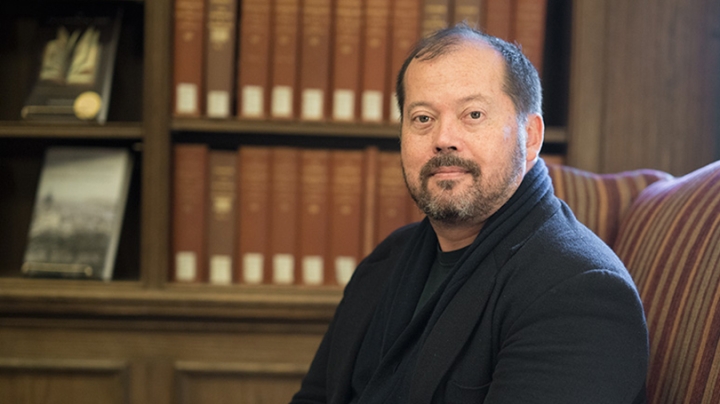 Of his first year at Dartmouth, Associate Professor Alexander Chee says, “I love it. It’s been a profound year that has left me excited to see what’s next.” (Photo by Eli Burakian ’00)
8/15/2017
Body

Associate Professor of English Alexander Chee says he is still trying to figure out what it means to him to receive this year’s Paul Engle Prize. “This award has made me think about my whole life,” the novelist and essayist says.

The prize—given annually by the Iowa City UNESCO City of Literature—recognizes “a writer, like Engle, who makes an impact on his or her community and the world at large through efforts beyond the page,” according to the prize website.

The author of two celebrated novels—Queen of the Night and Edinburgh—and numerous essays and short stories, Chee says he likes to write “about sex, power, history, and the uncanny.”

“I’m an advocate for a certain kind of bad taste, which is to say, being willing to write about coincidence, or to sort of merge fairy tale and history,” he says.

And he has long been an outspoken advocate for Asian American writers and for LGBTQ rights, from his work with the AIDS advocacy groups ACT UP and Queer Nation in San Francisco in the 1980s and ’90s to calling out racism and homophobia he experienced as an MFA student at the Iowa Writers’ Workshop. (The latter experience, he says, led him to run for—and win—the title of prom queen of the 1994 Iowa Writers’ Workshop prom.)

In his first novel, Edinburgh, published in 2001, a survivor of childhood sexual abuse comes to terms with his own sexuality. “It was considered to be part of a group of gay novels that were both literary and sexually explicit in way that hadn’t really been seen until then,” he says. The book won the Iowa Writers’ Workshop’s Michener Copernicus Prize in Fiction, the Lambda Literary Foundation’s Editor’s Choice Prize, and the Asian American Writers’ Workshop Literary Award.

“I had the fortune of being the first openly gay Korean American author. I’m still the only one,” he says. “But I can name most of the young queer Korean American writers who are coming up. And I have taken to talking about it a lot, because I think that silence is indicative of a problem. I shouldn’t have been the first and I shouldn’t be the only one, but here I am. So I feel an obligation in a sense to keep talking about it.”

He has done more than talk. Among other things, he has helped to create (in the name of Justin Chin, a Malaysian American poet who died in 2015) a fellowship to the Lambda Literary Foundation’s Writers Retreat for Emerging LGBTQ Voices and two fellowships (in the name of his grandmother Yi Dae Up) for Asian American and Asian immigrant women to attend the Jack Jones Literary Arts retreat in Taos, N.M. He is also an administrator of a Facebook group for Korean American writers called Fourth Kingdom, which has about 150 members.

“This is just me hoping to have more company in doing this soon,” he says. “I’ve joked that I hope one day that there will be enough Korean American gay writers that we’ll have fights about what our aesthetic should be.”

Growing up as a biracial child in a predominantly white community in Maine helped shape him into a storyteller, he says.

“People would ask me, what are you? Or the more polite version their parents would ask: How did your parents meet? Which was a way of saying, why do you exist?” Before he was old enough to fully understand the connotations behind the question, he says, he took it at face value. “The story of my parents meeting is a great story, and I knew it, so I would tell that story.”

As an undergraduate at Wesleyan University, Chee found mentors in writers Annie Dillard and Kit Reed. At a Bennington Summer Writers Conference, Mary Robison made a deep impression. “She said to me, no one is writing these kinds of stories that you’re writing—you should keep writing them.”

Chee joined the Dartmouth faculty last year. “I love it here,” he says. “It’s been a year of learning just how much opportunity there is. Already at Dartmouth I’ve had some of my favorite students in a career as a teacher. I’ve just been so impressed by how driven they are and how talented. It’s been a profound year that has left me excited to see what’s next.”

“I believe powerfully in the role of creative writing in the liberal arts,” he says. “Writing a piece of fiction is a lesson in what you care about enough to finish. That’s what students can find in an undergraduate writing class. They can find other things, certainly: careful reading, imagination as an approach to problem solving, and a sense of community, too.”

He already needs more shelves in his Sanborn office—in part because it is currently full of submissions he is reading as a judge for the 2017 National Book Award. Though he can’t yet comment on the selection process (“I can’t even do the sort of social media enthusing about a book as I’m reading it, which is something I enjoy”), he says reading submissions has been an interesting way “to get a picture of a year in the country’s fictions.”

“You see trends. The concerns of the culture at large. It’s a very different kind of reading than the way I read normally, which is more about what I’m interested in. It becomes a sort of meta-critical process for thinking about what American fiction even is, if it is anything.”

Chee’s first collection of essays, How to Write an Autobiographical Novel, comes out in April 2018.